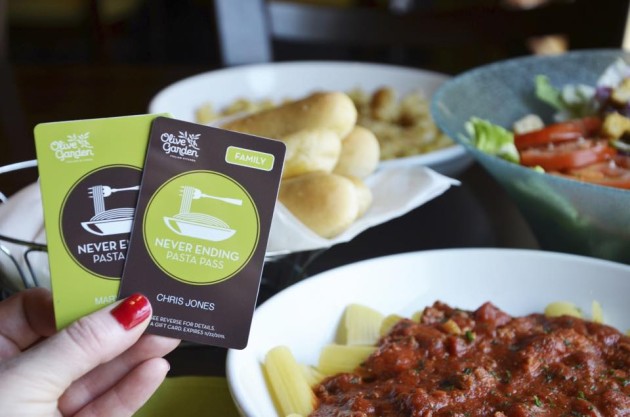 Olive Garden is bringing back its never ending Pasta Pass that lets people gorge on as much pasta as they want for seven weeks. And this year, friends and family are welcome to pig out too.

Starting today at 2pm EST, pasta lovers across the country will have a chance to snag one of two versions of Olive Garden’s coveted Pasta Passes. The restaurant chain will sell 1,000 of the $100 regular Pasta Passes, which entitle the bearer to a never-ending pasta bowl, as well as breadsticks, soda and soup or salad. And in a new twist, there will also be 1,000 family Pasta Passes up for grabs, which cost $300 and allow cardholders to bring up to three guests with them to the table.

For seven weeks, from October 5th through November 22nd, Pasta Pass holders dining in their restaurants will have access to never-ending pasta, homemade sauces, pasta toppings, soup or salad, breadsticks and Coca-Cola soft drinks as many times as they would like. The passes aren’t transferable, so the cardholder has to be the one using it. Those who purchase a family Pasta Pass can share the pass benefits with an additional three guests dining with the cardholder.

The promotion is a way to celebrate the 20th anniversary of Olive Garden’s Never Ending Pasta Bowl, which costs $9.99 and lets people eat as much pasta as they can in a single visit.

Last year, the never ending Pasta Pass made headlines after selling out in only 45 minutes. With even more people aware of it this time around, you can be sure that they won’t last for long. So if you want to get your hands on one, you’d best hurry up!

UPDATE: Olive Garden’s ‎Pasta Passes‬ sold out within one second!

The Next Great Burger Premieres Tuesday on Esquire Network