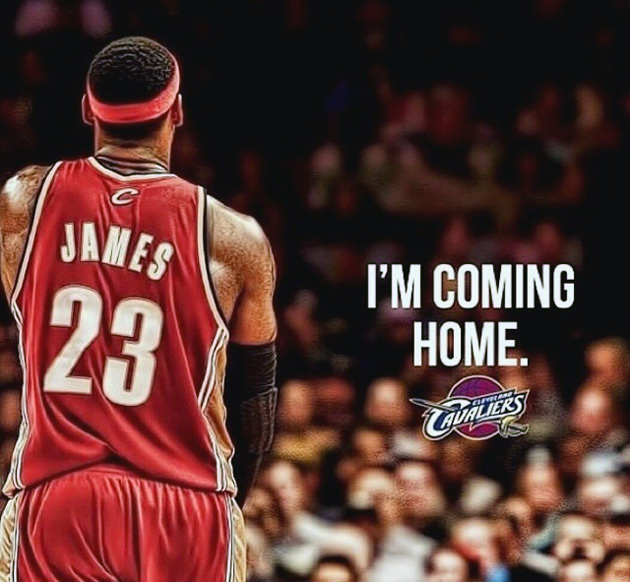 After leaving Northeast Ohio four years ago, Cleveland sports fans and Cavaliers fans are rejoicing today at the announcement that former first overall pick LeBron James is returning to the Cleveland Cavaliers.

James was the first pick in the draft in 2003, and fans in Cleveland felt betrayed when he went on TV at the Boys and Girls Club and announced that he was leaving the team to go play in South Beach for the Heat. In four years in Miami he reached four NBA finals all four years, winning titles in 2012 and 2013.

James announced that his goal is to still win as many titles as possible, and now he plans on doing it in Cleveland, a place as he stated today ‘holds a special place in his heart.’ The city of Cleveland hasn’t won a title in any major professional sport in 50 years, and with James aboard with the Cavs, this is perfect and best chance for they city to finally do that.

The grief felt in Cleveland in 2010 was real, growing up in a city that had to deal with failed championship bids by the Cleveland Browns in AFC Title games in 1986 (The Drive) and 1987 (The Fumble), and again with the Cleveland Indians in 1995 and 1997, nothing more than winning a title will do for a city that has been knocked down so many times it’s hard to count.

LeBron James may have not done it the way fans felt was right four years ago, but a letter today stating that Northeast Ohio is the place where he grew up and that he wants to give fans here in Cleveland ‘hope’ will go a long way in mending any fences.

The jerseys that Cavaliers fans burned four years ago will be purchased again. The trading cards, fatheads, posters, bobbleheads and other Cavs merchandise that were put away, sold at garage sales, or flat out thrown out will be back on shelves within hours.

Welcome home King James – it’s good to have you back.