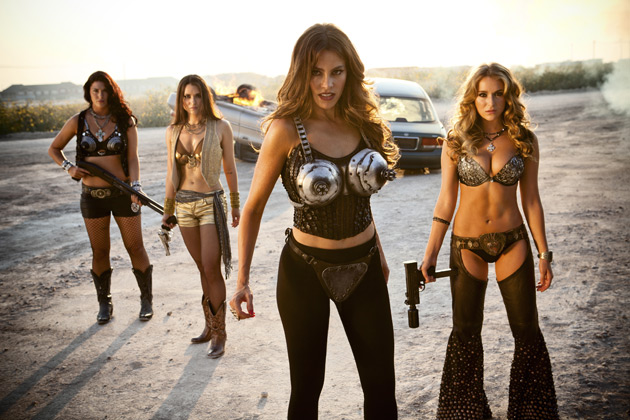 We’ve been eagerly-awaiting the release of Machete Kills for months and months, and it finally hits theaters this Friday! The first Machete movie was pretty awesome, but this one looks even better, with a star-studded ensemble taking on one of the wildest adventures to save the world!

As you can see from the photo above, Machete Kills has tons of eye candy to keep you happy. The female cast includes Michelle Rodriguez, Sofia Vergara, Amber Heard, Lady Gaga, Jessica Alba, Alexa Vega, and Vanessa Hudgens.

If this cornucopia of hotness doesn’t convince you to see the movie, maybe the crazy plot-line will draw you in. In the movie, legendary secret agent Machete Cortez (Danny Trejo) is recruited by the U.S. President (Charlie Sheen) to stop a crazed global terrorist (Mel Gibson) from starting a nuclear war. With a bounty on his head, Machete faces death at every turn from an all-star cast of deadly (and apparently sexy) assassins.

This movie sounds all kinds of awesome, and I can’t wait to see it this weekend! 🙂

Related Topics:Machete Kills
Up Next