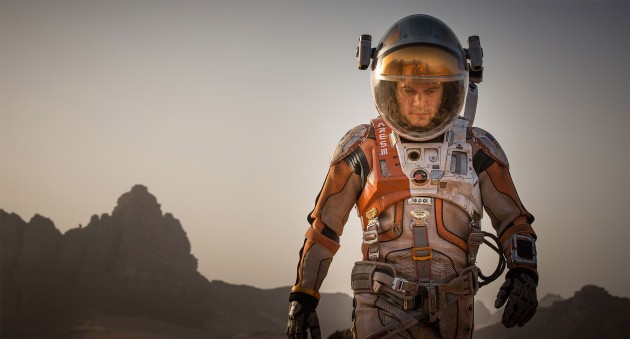 To be perfectly honest, I wasn’t really sure if I was ready to invite Ridley Scott back to dinner so soon. In fact, last year’s Exodus: Gods and Kings was so biblically awful that it made me question if the master filmmaker had lost his touch entirely. In an attempt to return to form after that disaster, Scott goes back to the Sci Fi genre where he is arguably most at home.

While The Martian is yet another massive production, Ridley Scott significantly scales the back the focus to create a much less all-encompassing and more accessible work. Much like The Martian‘s protagonist Mark Watney, Scott is a man stranded by the failings of his own curiosity, and it was perhaps exactly what he needed to tell a story of someone he could relate to.

The movie opens, and we find ourselves strung along with the crew of the Ares III mission to Mars as they begin to lay the groundwork for their research on Mars. Things seem to be going smoothly, until a freak storm forces them to evacuate the planet. In their escape attempt, all but one manage to make it back onto the ship. 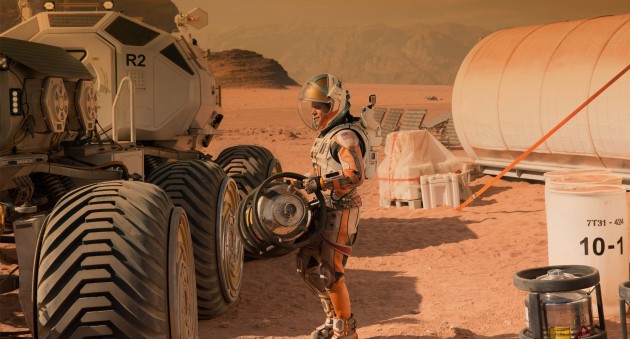 The straggler, botanist Mark Watney (Matt Damon) finds himself with a decent amount of resources left behind, but not nearly enough time at his disposal to survive on the desolate planet. As such, while he waits for help he is going to have to, as he puts it, “science the shit out of this.” Meanwhile, officials at NASA lead by Teddy Sanders (Jeff Daniels) and Vincent Kapoor (Chiwetel Ejiofor) attempt to figure out a way to get Mark home while the crew of the Ares forms plans of their own.

Although The Martian does represent a radical improvement for Scott, it ultimately would be absolutely sunk without a capable leading man at the helm. Fortunately, it has one of the best in the business in Damon, and he excels here. It definitely helps that Watney is just an absolute pleasure, proactive and adorably snarky where other leading men in these types of stories would be morose and glum. Even so, Damon injects his natural every-man charm to make each of Watney’s charming seconds on screen pop. In fact, the film really only slows down when it leaves Watney behind to go back to Earth or space. It’s certainly not the fault of the absolutely stacked cast, but none of the supporting roles are particularly interesting. 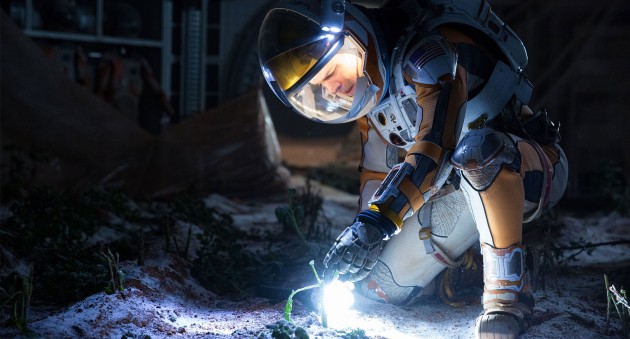 It may help that Chiwetel Ejiofor, Kristen Wiig, Donald Glover, or Jessica Chastain (to name only a few) are there to inject what humanity they can, but these segments just don’t have the tension and urgency that the Mars ones do.

Bringing the scalding desert of Mars to vivid life, Scott crafts one of his most beautiful looking films in years here. It never feels like the planet is just being shown off for the sake of obnoxious visual effects. Every spec of dirt or gust of wind feels organic, serving the story instead of existing as the main set-piece. In fact, Scott films a lot of scenes here in a very documentary-like style, making the foreign world fit even more into the background of what is ultimately more of a survival film than an effects piece. 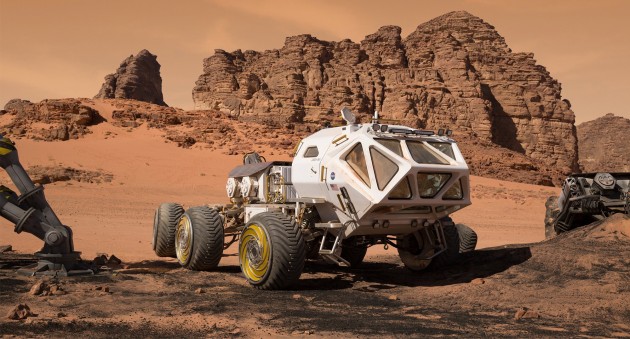 Scott should also be commended for crafting a science fiction story that remains as hopeful as it’s delightful protagonist. Although The Martian has it’s fair share of dark turns, it never feels grim. Every problem has a solution, it just needs to be figured out, and that problem solving spirit is infectious on the audience. Every character here is so motivated that it makes us want to see what they come up with, and even when they get discouraged, it’s just a momentary glitch and not fodder for the rains of cynicism. The punchy, human moments keep on coming in Drew Goddard’s fantastic script, and although the film falls into a bit of shaky pacing in it’s second act, it never ceases to be at least a little interesting because of how inherently human the whole affair is.

The Martian may not be a masterpiece on par with Ridley Scott’s best work, but it certainly is a solid return to form for a creative force who perhaps just needed some solid material. It takes the conventions of the classic stranded man story and turns them on their ear to give us something that’s not only fun to watch, but vaguely inspiring. It’s a sign that blockbuster filmmaking doesn’t need to be bombastic and loud in order to get people clapping, and if Scott keeps to the spirit of this film, he may have another classic in him yet.