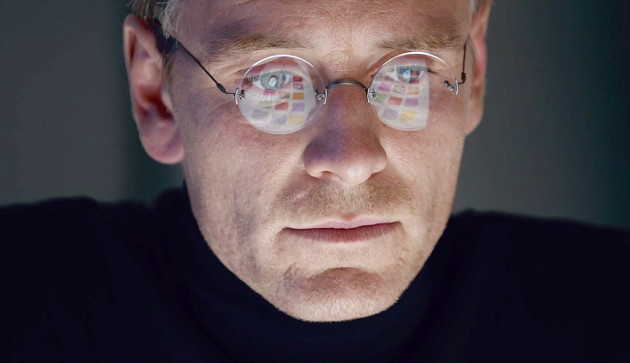 We’ve seen way too many movies about Steve Jobs, and this Aaron Sorkin penned portrayal of the late tech tycoon knows it. We’re tired of simply hearing about the little garage that Jobs and Steve Wozniak created the first Apple computer in, or how the billionaire was arrogant and borderline abusive to his employees. Even with what is essentially the top talent in headline ripping Hollywood crafting this tale one last time (hopefully), there needs to be something entirely different to give it the nitrous oxide to pull ahead of the pack. “Not to worry,” Sorkin assures us as he inks his golden pen, “I’ve got a little something special for you.”

Separating the story into three compact acts, Sorkin and director Danny Boyle take us behind the scenes of three of Steve Jobs’ (Michael Fassbender) most important tech launches, The Macintosh, NeXT, and the iMac. As the arrogant puppet-master attempts to juggle technical and personal woes, he comes to bare the pitch-blackness of his soul. It ranges from his dismissive treatment of partner Steve Wozniak (Seth Rogen) to his inability to constructively collaborate with his superiors, much to the dismay of CEO John Sculley (Jeff Daniels). However, Steve’s most tragic affliction lies in his insistence that his daughter Lisa did not in fact come from him, which allows him to remove himself from the responsibility of loving her fully.

Steve Jobs‘ greatest triumph lies in it’s brilliantly unique structure, woven effortlessly by Sorkin, who proves once again here that he’s the greatest resurrector of historical figures and events since William Shakespeare. Make no mistake, this isn’t a series of drawing room conversations, but a cleverly disguised war film with the bullets being words. Every moment here feels urgent, with each new approacher of Jobs entering a lions den with a firecracker that could go off at any minute. This tension makes every scene feel sublimely dramatic, and the crackling dialogue ensures that absolutely everyone has something witty and impactful to say.

Bard-like structure aside, this effort would be all for naught if our towering tragic anti-hero wasn’t interesting. Thankfully, not only is Steve Jobs an astoundingly realized character, but Michael Fassbender brings him so vividly to life that at times it seems like the man himself was summoned by an Ouija board. Despite bearing practically no physical resemblance to Jobs, Fassbender utterly covers this gap by adjusting every little vocal tic and mannerism to embody the persona of this guy. He’s a power thirsty, cocked shot-gun of a guy who could go off any moment, but the film never tries to convey him as simply a villain. There are moments where we see how in his own sick way, Steve really cares for some of these people. Whether it’s a genuine moment of affection or even just a subtle look, Fassbender sells every single second. We don’t care about Steve because he’s cathartically mean, but because there’s that little shred of humanity just begging to come out. I will be genuinely surprised if there is a better performance this year.

The movie’s supporting cast is also uniformly strong. Not that they have much of a choice, as Sorkin’s writing demands the A plus game of even the strongest actor. Standing out the most is Jeff Daniels, who gets his meatiest role in years here as a man who does his best to hold onto Steve’s brilliance with everything he has despite utter resistance from all sides. There is scene between these two that is one of the most intense moments of any movie this year, that is so incredible that it could inspire applause on it’s own. Also strong is Seth Rogen who’s turn as the criminally man-handled and under appreciated Wozniak is chock full of pain and completely heartbreaking. Meanwhile Kate Winslet gets a lot to do as Joanna Hoffman, Jobs’ closest advisor. While she certainly has a bunch of great moments with Fassbender, her inconsistent Polish accent is a little bit distracting and keeps her still very rich character from being taken totally seriously. Even so, there isn’t one weak link here. Everybody goes above and beyond their programing to deliver.

While the writing is certainly more the star here, Danny Boyle’s stellar direction should not be discounted. He takes a more subtle, observant place than his typically more bombastic films may suggest, but he picks the perfect moments to inject some playful style into the proceedings. It could be something as heavy handed as the couple of blazing visual montages that act as transitions between the scenes, or the subtle framing choices that will have cool little visual suggestions and affectations. He perfectly inter-weaves all of the ancillary elements of the scene, something opting to play two conversations between the same two characters at the same time. While it may seem overwhelming, he builds these moments to pitch perfect crescendos that create absolutely incendiary drama. Boyle’s making sure that a little something is going on in every frame of this film, and while it’s certainly not the film where his direction shines the most, he still guides the ship with grace.

Steve Jobs is not only just as insanely ambitious as its subject, but it succeeds so monumentally that it might become just as iconic. It may not be quite as unified a story as Sorkin’s similar The Social Network, but in certain moments surpasses it by sheer intensity. Michael Fassbender delivers a performance for the ages here, perhaps the very best of his career, and Boyle ensures that the film is constantly burning along. You may have seen Steve Jobs’ story played out before, but never like this. It’s a film so good that it’ll either have you buying a new Mac or iPhone, or hurling your current one against the wall in rage at their creator.

I suppose it all depends how much you can sympathize with the Henry VIII of Silicon Valley.

You’ve Got To Check Out The Latest ‘Star Wars: The Force Awakens’ Trailer