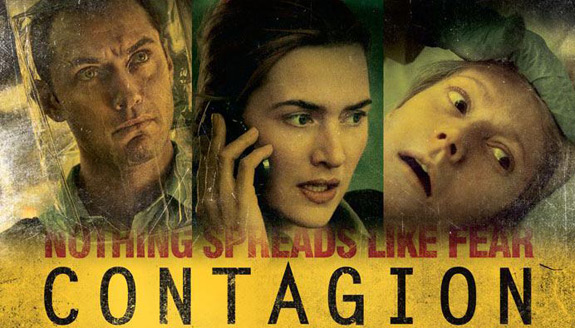 On Thursday, I posted the movie trailer for Contagion, and I was psyched to go see it the following night! Like I said, I’m a sucker for these doomsday-type movies. 28 Days Later, I Am Legend, The Road, etc.

Contagion is no joke. Futurists warn that we could potentially face an epidemic like the one portrayed in the movie, and recent outbreaks like SARS and the bird flu prove that this isn’t just Hollywood hyperbole.

So the premise of the movie is quite simple. A lethal airborne virus has been introduced to the public that’s killing people in just days. As the fast-moving epidemic grows, the worldwide medical community races to find a cure and control the panic that spreads faster than the virus itself. Where did this virus come from, and how can they fight it?

I read an article which argued that given 72 hours without electricity, running water, police or medical services, re-suppling the local grocery store, that what we think of as “civilization” would fall apart quite rapidly. That we are much closer to still being savages than we like to admit to ourselves.

Soderbergh does a great job in showing us just this in light of the outbreak. It really makes you look at things in a different light.

Overall, a pretty solid movie, one that I’d give a 3.5 out of 4. There are a lot of unanswered questions at the end, but you still get enough answers to give you some closure.

If you’ve seen it, let us know what you thought of it!

Jonah Hill Is Taking Your Calls!