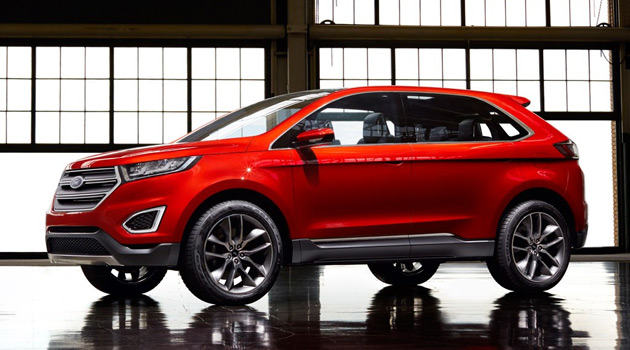 Since its introduction in 2006, the Ford Edge has stood out from other SUVs for its distinctive styling and performance. At the recent L.A. Auto Show, Ford unveiled an Edge with more to offer drivers than ever — more distinction in the styling, increased performance, and a greater level of versatility.

This concept is meant to join the Ford global utility lineup — Ford has been making a clear effort lately to enter the global market, as obvious with the newly overhauled 2015 Ford Mustang. Ford wants to make their vehicles more attractive to this market by increasing quality and technology.

It’s impossible to ignore the appearance changes in the concept for the new Ford Edge — it’s far sleeker and is meant to mimic a more athletic & agile likeness. The body lines are made to flow better and come together with a three-bar front end grille.

When you look at the concept for the Ford Edge, you’re seeing a lot more than just a dynamic SUV — technology is integrated in the exterior design as well. Technology opens and closes active grille shutters to better regulate the temperature of the engine while minimizing the impact on aerodynamics. In the past, front grille cooling systems filled the engine bay up with air and created a parachute effect on the front end of the car, impacting performance and gas mileage — this technology is meant to eliminate the lag.

Front headlights with individual LED bulbs illuminate in white for a more attractive display. Turn signals are chrome-appearing until engaged, then they become bight amber — a similar action happens when the Edge’s taillights are in use.

As a part of Ford’s effort to increase the global desire for the Edge, they took the interior of this model to a new level using a higher level of craftsmanship and premium materials. It’s made to give the driver and passengers a rolling sanctuary feeling, similar to the atmosphere of high-end luxury autos.

The interior redesign includes a premium Nubuck leather-wrapped instrument panel with hand stitching throughout, perforated leather seats, accent plating, and carbon weaved/copper accented armrests. Additionally, the steering wheel and gear shifter will get an upgrade and the sill plate will be labeled with “Edge” and illuminated.

Technologies, some still under development by Ford, will make the steering and handling of the Edge better than ever before. Their adaptive steering changes based on the driving conditions — this is a very similar technology to that used in luxury vehicles and high-end sports cars. Drivers will also get fully assisted parking aid for push button parking inside or outside of the vehicle. Additionally, a recently demonstrated obstacle avoidance technology aims to take driving safety to a whole new level.

Under the hood, you will likely find the latest in the Ford EcoBoost technology. Many believe it will come with the 2.3L engine found in the new Lincoln MKC. This will make this one of the most powerful and fuel efficient vehicles in its class.

This concept is important to both those who want to drive a new Ford Edge specifically, and for all Ford loyalist. It represents the globalization of the brand and technologies that will be integrated into all models in the future.

Interested in buying a 2015 Edge? Keep an eye on the Detroit Auto Show in January for the full reveal of the production model and expect to be able to purchase one in late 2014.