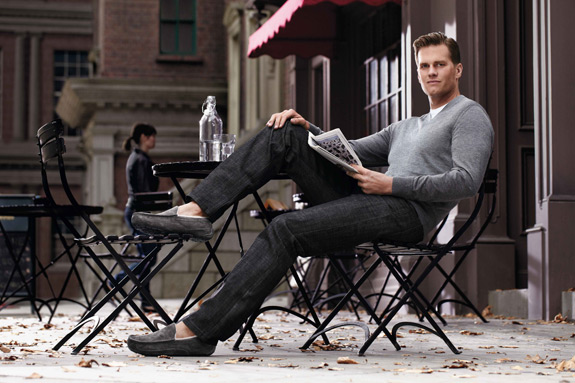 The Pink Slip holiday campaign was inspired from one of Brady’s personal anecdotes. Even before he partnered with UGG Australia, Brady had a tradition of giving fellow team members the UGG for Men “Ascot” slipper as a way to say thanks, according to the company.

The spot features a rookie player anxiously walking to his locker, worried if he made the team or not. Instead of finding the dreaded pink slip, he finds a pair of Ascot slippers in his locker. Tom shows up to congratulate him, giving the rookie the answer he had hoped for.

There seems to be a lot of confusion over this commercial, with many people comparing Tom Brady’s acting to Brad Pitt’s in that infamous Chanel No 5 ad. But with the proper backstory, it all makes perfect sense!

The Ascot is famous for its supple feel and stylish indoor/outdoor silhouette. An icon of casual elegance, cozy suede with a moisture-wicking sheepskin lining and lightweight, molded rubber outsole. The slipper retails for $110 and is available at www.uggaustralia.com, at flagship locations, and at select retailers worldwide.

NASCAR Returns To Their Roots With Dirt-Track Race