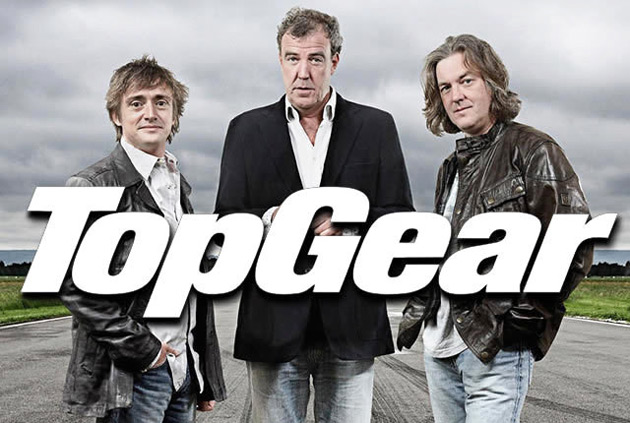 The vehicular antics of Top Gear seem to have no bounds. From turning cars into boats to traversing the jungles of Bolivia, Top Gear continually breaks the conventions of standard vehicle usage.

Despite having been put through a variety of uncomfortable and dangerous situations, the Top Gear trio show no signs of slowing down. It appears they are still willing to put themselves on the line for our entertainment, so Jess from CableTV.com decided to come up with seven ideas for what they could do for future episodes.

1. Drop a car out of a plane and land it safely.

Remember back in grade school when you would stuff an egg into a makeshift parachute and drop it from a roof to see if it would land intact? Same concept, except with cars and from 10,000 feet. This would be the ultimate test of vehicular durability.

Whether the car survives the fall or not is less important to us as seeing the look on Hammond’s face as he plummets towards the earth in a metal cage with only a parachute to save him.

There’s something really enjoyable about watching James, Hammond, and Jeremy outside of their comfort zones. That’s why we want to see them swim with sharks. For this episode, they would have to transform a car into a shark-proof cage and get dropped into the ocean.

Just to make things a little more interesting, they would have to use convertibles for their shark cages. There’s nothing like an afternoon drive at the bottom of a shark infested ocean with the top down.

3. Winterize a car in Alaska.

For this episode they would have to stay alive in the Alaskan tundra for a week using only a car as shelter. They would have to pick a car with good insulation and deck it out for survival. They could carve out trapdoors in the floor to ice fish or maybe even convert their cars into dog sleds once they run out of gas.

The twist? No heaters allowed. Let’s see them get creative to come up with a solution for staying warm inside their winter machines.

There is hardly a more unpleasant experience than moving. Let’s see the Top Gear team try to travel across England in moving vans carrying extremely fragile objects. Whoever has the most damaged goods at the end loses.

To make things more interesting, they would have to travel across the English countryside. Have you ever heard of going off-roading with moving vans? We haven’t either, but we’d like to see it.

OK, so maybe they’ve already done this, but we want to see them do it again. Last time they traveled across Bolivia to prove who could pick the most durable vehicle. Seeing them interact with natives and traverse hazardous terrain was unforgettable.

How about we see them do the same thing, but across the Australian outback or the Sahara desert? With each milestone they reach they would have objectives to accomplish or receive rewards.

6. Drive with only voice command.

This would be pretty much the same concept as riding a bike with no hands. Hands-free driving by using only voice commands to steer. They could maneuver a closed course and see who can get through in the shortest amount of time (if they can get through at all).

We want to see a special episode combining our favorite special effects specialists and car connoisseurs. The possibilities would be endless and the explosions would be extraordinary.

The challenge would be on to see which car can make the most dramatic explosion? Which commercial vehicles are the best for pulling off stunts? Which car can continue to function the longest after multiple crashes? They might have to make more than one episode of this (or maybe even make this a whole season).

What other stunts would you like to see the folks on Top Gear attempt?

Related Topics:Top Gear
Up Next

Taking A Closer Look At The New Lexus NX