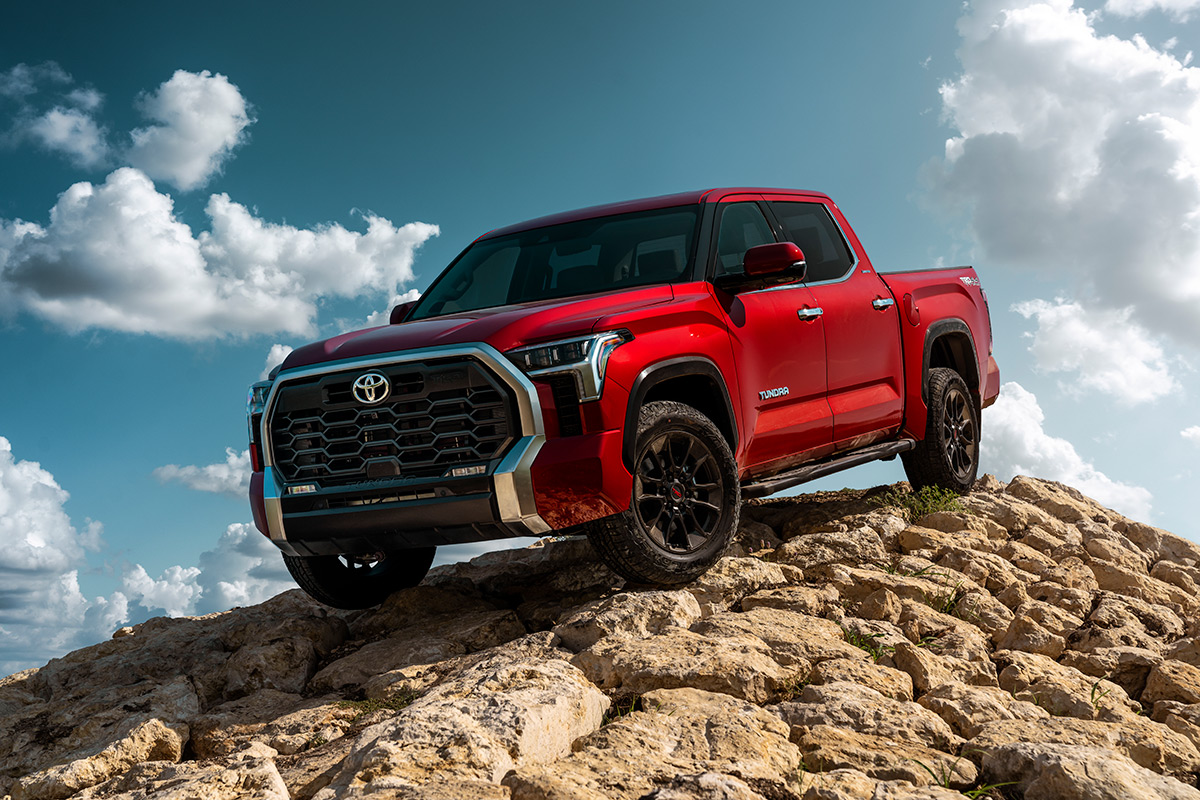 The all-new 2022 Toyota Tundra full-size pickup truck is finally here, making its world debut tonight during Sunday Night Football in an epic commercial that pays tribute to its heritage of legendary vehicles while showcasing what’s next. I seriously had goosebumps the first time I saw the spot, hats off to Toyota’s marketing team that put it together!

Now I know what you’re thinking, and you’re not wrong. The new Tundra is looooong overdue for an overhaul, seeing as how the last-generation Tundra came out back in 2007 and was last refreshed in 2014. But it looks like it was worth the wait, with Toyota delivering an absolute powerhouse of a truck that’s perfectly suited for the outdoor lifestyle crowd.

We recently flew down to Dallas to check out the all-new Tundra in person, and let me tell you, it’s a beaut Clark, with bold exterior styling that is sure to turn heads wherever you go. Toyota designers aimed to “create a muscular, chiseled and athletic design that also looks like it could handle the toughest towing demands,” and they totally nailed it. Yeah, some of the grilles are a bit over-the-top, but you’ve got options. 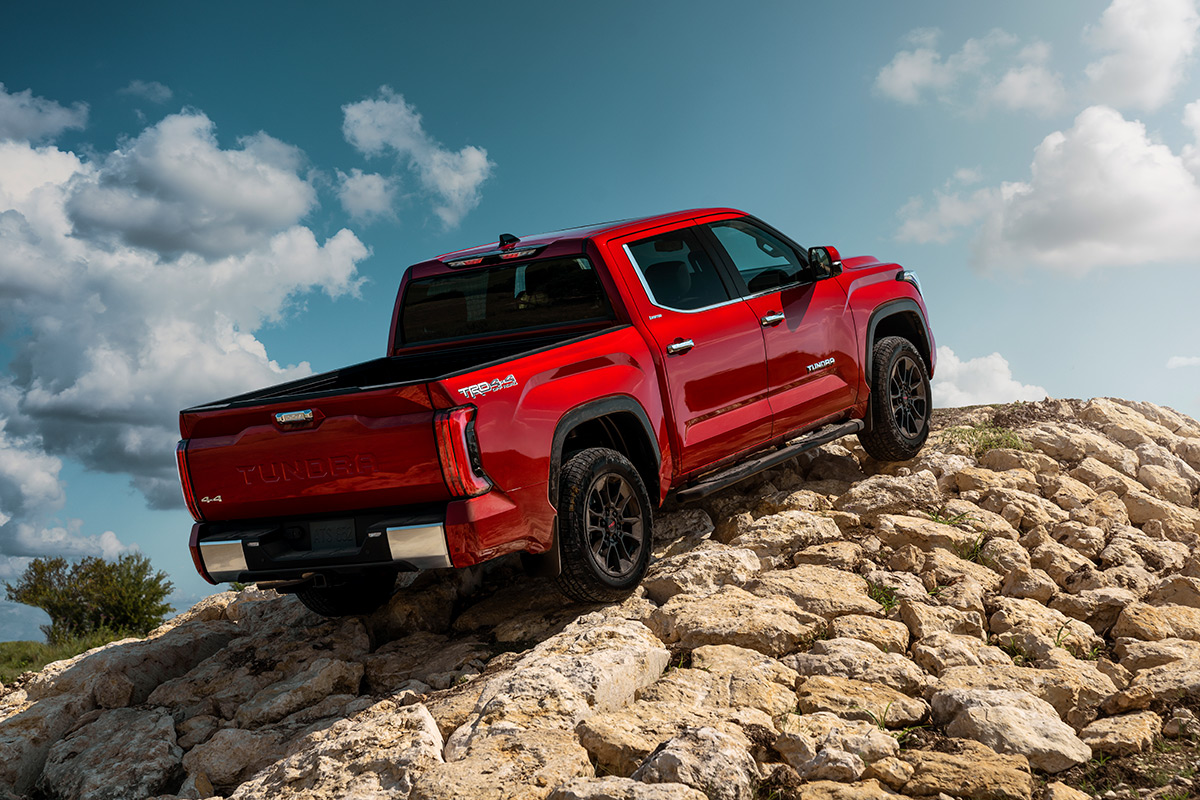 But the Tundra is more than just a rugged exterior, with the full-size pickup truck redesigned from the ground up, with the engineers improving upon everything – performance, capability, multimedia, creature comforts and more, while continuing to deliver the quality, durability, and reliability that they’re known for (many old Tundras have passed the million-mile mark).

Designed, engineered, and assembled in the U.S., there’s no question this is the toughest, most capable, most advanced Tundra yet. Improvements and enhancements include its new high-strength boxed, steel-ladder frame, aluminum-reinforced composite bed, and fully redesigned multi-link rear suspension. As a result, the the Tundra boasts an impressive maximum towing capacity of up to 12,000 pounds and a max payload capacity of 1,940 pounds.

The Tundra rides on an all-new chassis (taking the best of three other platforms from Toyota’s truck line-up), which necessitated a fresh approach to suspension. The new multi-link rear suspension ditches leaf springs in favor of coil springs, delivering better ride comfort, straight-line stability and overall handling dynamics. There’s even more happening on the suspension front (especially in TRD Pro grades), but we’ll save that talk until we actually drive the Tundra on (and off) the road and can experience these changes for ourselves. 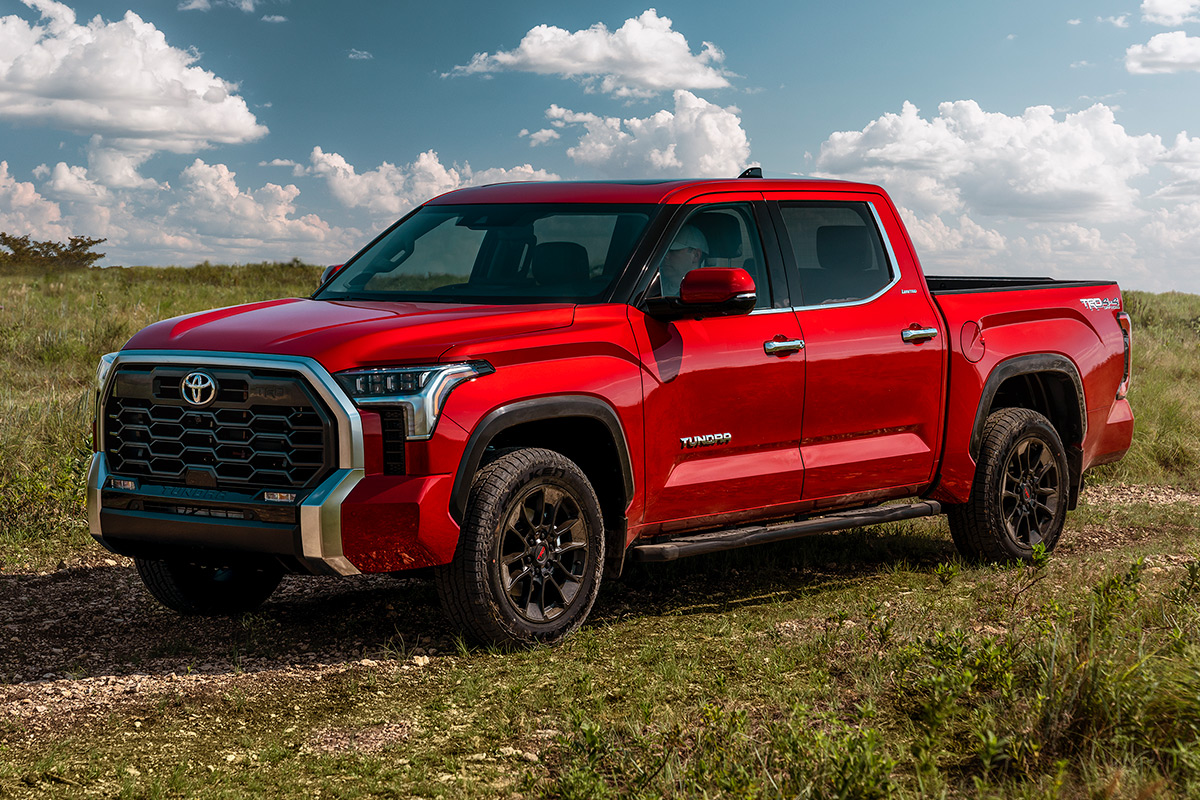 Buyers can choose from two different powerplants for the 2022 Tundra. The “base” engine is a new twin-turbo 3.5-liter V6 engine that delivers 389 horsepower and 479 lb-ft of torque. That is significantly more powerful (and more fuel efficient) than the outgoing 5.7-liter V8 engine. But the real showstopper for Tundra is their i-FORCE MAX powertrain, a hybrid twin-turbo V6 that puts out a whopping 437 horsepower and 583 lb-ft of torque. Seriously, who said being green can’t be fun? Both configurations are mated to a new 10-speed automatic transmission that features a sequential shift mode, uphill/downhill shift logic, and tow/haul driving modes.

Inside, you’ll find a new interior that’s quite the upgrade from the outgoing model, with a host of creature comforts for driver and passenger alike, including heated/ventilated front seats, an available panoramic roof, rear sunshade, heated steering wheel and more. The interior is very well thought out, with an emphasis of functionality over flash. The Tundra also gets a host of new tech features, including an all-new multimedia system with an available 14″ touchscreen that supports wireless Apple CarPlay and Android Auto, a virtual Intelligent Assistant, a cloud-based native navigation system, over-the-air updates, and more. Premium trim levels are downright plush with supple leather and wood, while the TRD Pro trim is properly agro, complete with camo seats.

And of course, Toyota has equipped the Tundra with a plethora of safety features. Unlike some truck manufacturers that might require buyers to move up a few grades into the lineup before getting standard active safety, every Tundra comes standard with Toyota Safety Sense 2.5 – an all-encompassing safety suite that includes features like Pre-Collision System with Pedestrian Detection, Dynamic Radar Cruise Control, Lane Departure Alert, Lane Tracing Assist, Blind Spot Monitor, Rear Cross Traffic Alert, and more. 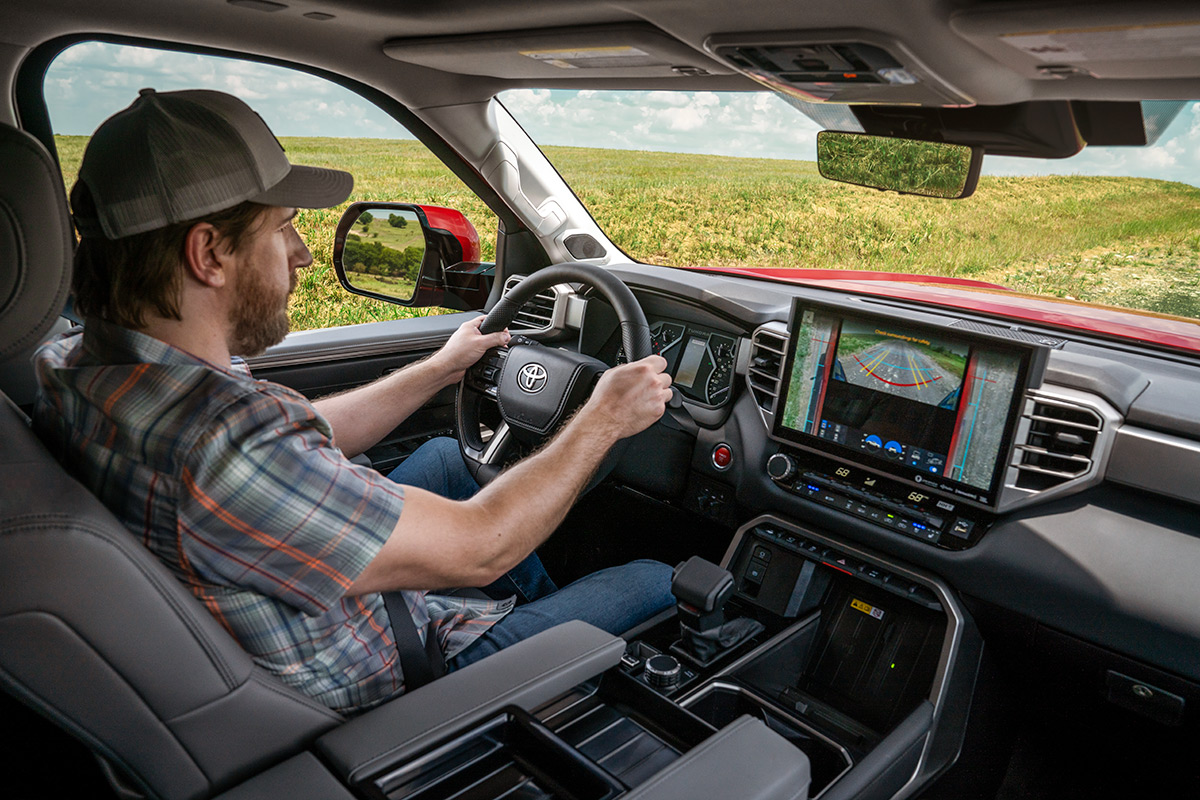 Given that most Tundra owners use their trucks for recreational pursuits, Toyota has bolstered their towing features, with additional cameras and exterior angle views, power extending and folding tow mirrors, Trailer Back Guidance, Straight Path Assist, and more. How about a self-backing feature to launch your boat? If you’ve seen any of the boat ramp launch fail videos on YouTube, you know how much people need a feature like this. Absolutely genius! 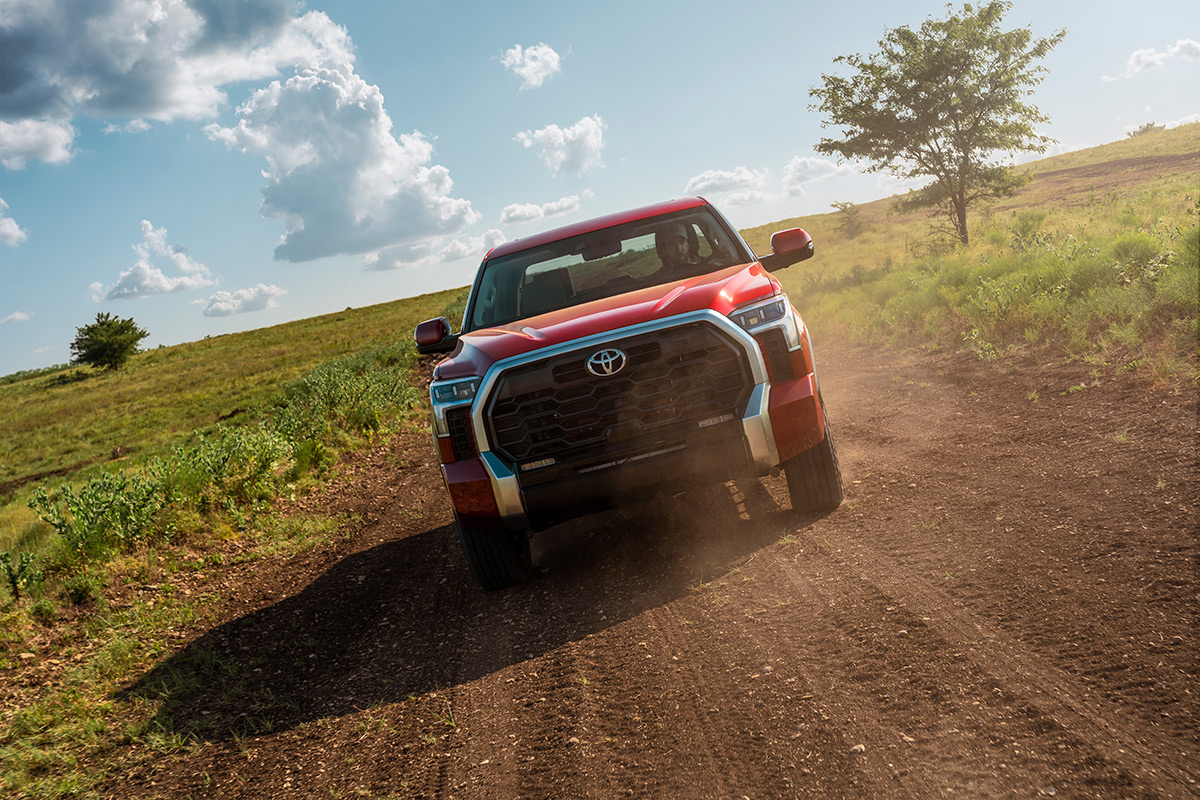 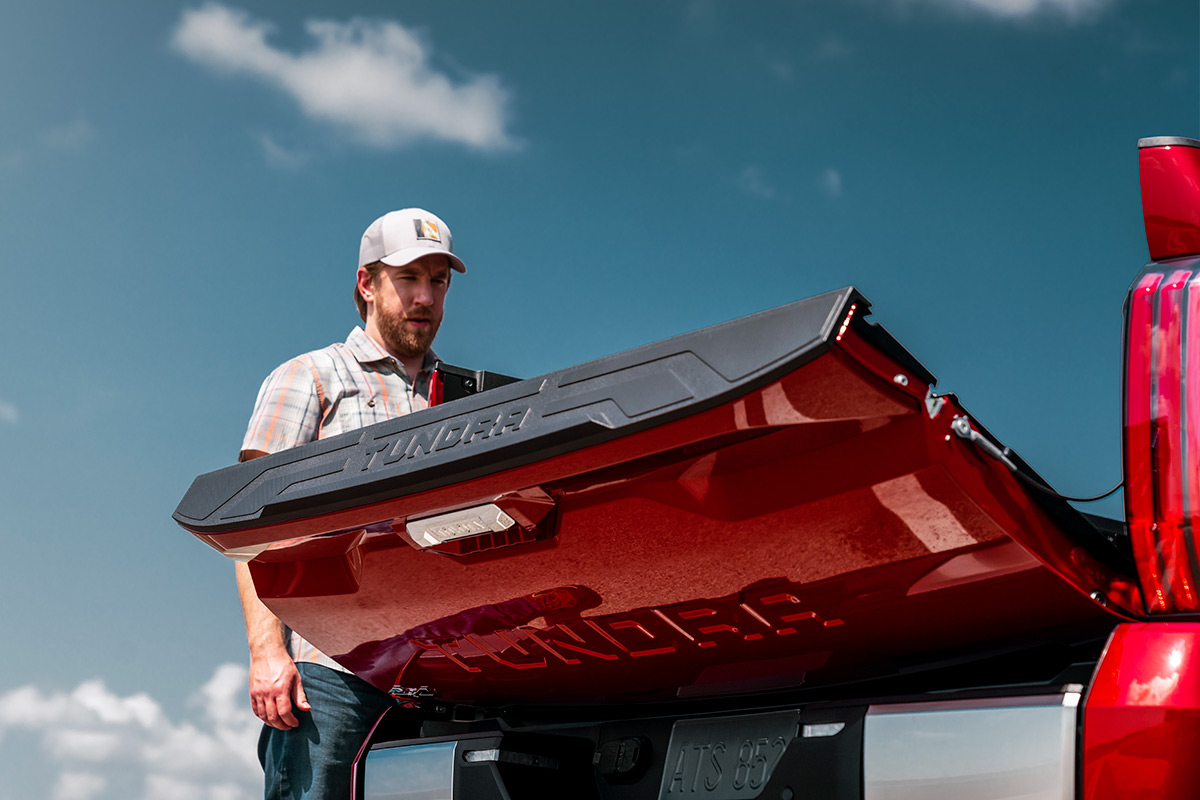 We’re excited to get time behind the wheel of these bad boys next month and really put them to the test, while getting them properly dirty. So if there’s anything specific that you want to learn more about during our time with them, be sure to leave a comment below, and we’ll be sure to make a note of it.

The all-new 2022 Toyota Tundra will go on sale later this year, with pricing to be announced closer to the on-sale date.

What do you guys think of the all-new 2022 Toyota Tundra?