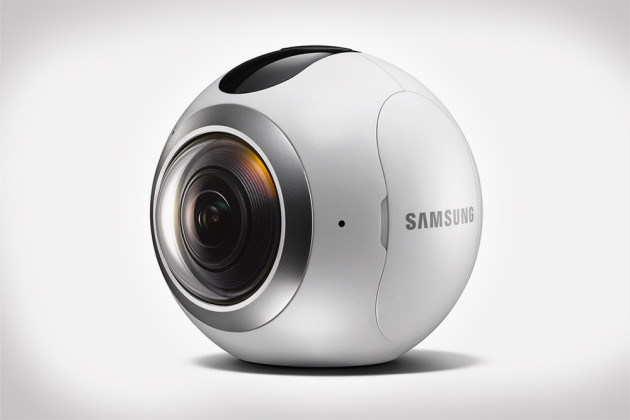 Over the past few months, you’ve likely come across a few 360° videos on YouTube or Facebook where you get a complete 360-degree field of view. Whether you are watching an action sport video (skiing, surfing, etc) or a scenic drone videos, being able to see ALL of the action and not just what’s right in front of the camera is a real game changer.

Naturally, numerous companies are scrambling to bring their 360° cameras to market. So which one should you choose? Based on what we’ve seen so far, the Samsung Gear 360 looks like a solid offering.

The Samsung Gear 360 uses dual F2.0 fisheye lenses, attached to a dual CMOS 15-megapixel sensor. The front and rear lenses each capture 180 degrees horizontally and vertically, creating a seamless and complete 360-degree field of view at resolutions up to 3840×1920 (30 fps) for video or 7776×3888 (30M) for still shots. The camera is “outdoor-friendly”, meaning that it’s dust and splash resistant. And you can pair it up to your Galaxy smartphone via Bluetooth to transform its large screen into a very handy remote viewfinder and to transfer files in one simple move.

As you can see in the video below, the results are pretty impressive:

The Samsung Gear 360 is set to be released in the second quarter of 2016, with pricing to be released at a later date. Assuming it comes in at the right price, this might just become the de facto VR capture camera for consumers. We’ll just have to wait and see.

You can learn more about the Samsung Gear 360 at Samsung.com.

Related Topics:cameraSamsung Gear 360video
Up Next

Netflix Wants To Pay You $2,000 A Week To Travel The World And Take Photos

GoPro HERO4 Session Is Smaller & Lighter, But Comes At A Cost