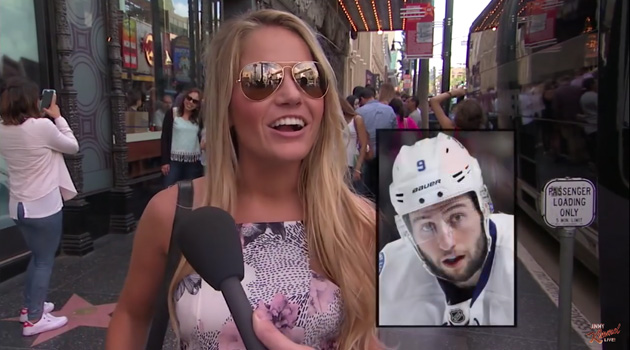 After a few boring interviews, they came across this chick who was most proud of the fact that she’d cheated on her ex-boyfriend (sorry Ben) with an NHL player and not having him find out. Yes, this sloot was all smiles as she talked about spreading her legs on national TV.. A classy chick indeed.

But it gets better. When pressed for details about the famous athelete, she tells the interviewer that his initials were TJ, and that he played hockey in Tampa Bay. It didn’t take long for the interview to figure out that she was talking about Lightning center Tyler Johnson, at which point she got visibly flustered and rushed away.

Word eventually got back to Johnson, who outright denied the story. “I have no idea who she is or why what was said was said. People can talk but (that) doesn’t mean it’s true.”

If it’s true, at least Ben can say that he’s eskimo brothers with Tyler Johnson. 🙂

How To Really Measure Which NFL Team Has The Best Fans