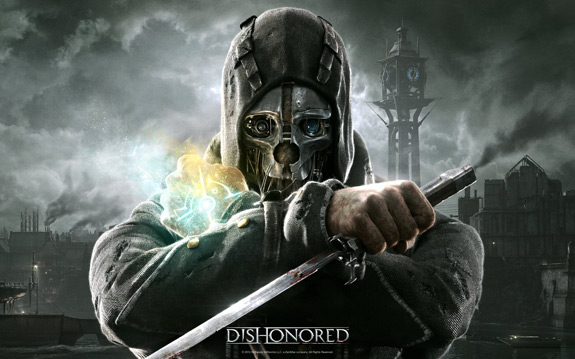 In a few weeks, Bethesda will be releasing a new game. You know, the company that published Fallout, and Skyrim, and many other great RPGs. Well on October 9th, Bethesda is releasing a game from Arkane Studios that will define what you expect from a shooter. This game is Dishonored.

With all the shooters out there, it is hard to find one that is really unique. Portal was great because it was a puzzle game, while the Bioshock series has relied on unique locations and augmented abilities. Other games have tried to add some flair to the tired old genre like Timeshift, but all these games have a common flaw. They all rely on one unique factor. Imagine if you could take all the great features of these games and create one enhanced experience. This is the crux of Dishonored.

In Dishonored you have the freedom to devise elaborate plans to eliminate enemies using nearly any means your imagination can devise. Imagine freezing time after an enemy fires a shot, you could then move them into the path of the bullet. When time restarts they have effectively shot themselves. You could theoretically complete an entire FPS without ever firing a single bullet.

The above example was only one way in which to complete an objective. If you would like to see more ways to decimate enemies in creative and unique ways check out the video below.

One thing is certain, Dishonored is trying t change the way games are played, and it has quickly moved to the top of our “must-have” list for this fall.

Related Topics:BethesdaDishonoredFall 2012Gaming
Up Next

Symantec Norton – It’s For Everyone