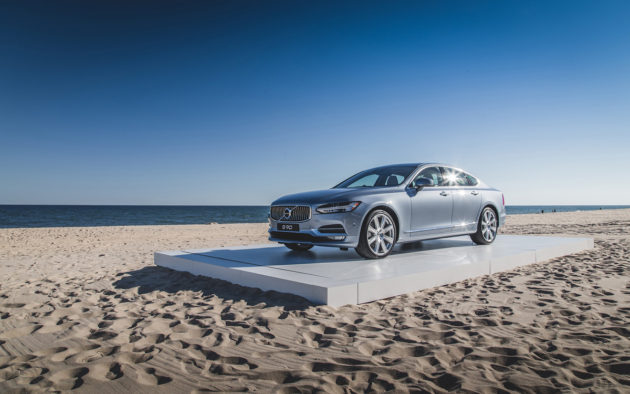 The Volvo S80 is almost on its way out after spanning two generations, with the current generation lasting an entire decade. That’s like the near equivalent to the age of 100 in human years, meaning the S80 is beyond obsolete by now. But unlike many other cars, the second generation S80 continues to age well, serving up a uniquely contemporary European take on luxury in Swedish fashion.

Taking the S80’s place is the all-new 2017 Volvo S90. Revealed at the 2016 Detroit Auto Show earlier this year, the S90 is Volvo’s second newest car in its latest generational product offensive. That’s a big deal in a variety of ways.

The Volvo S90 is the company’s second new car developed after Chinese auto conglomerate Zhejiang Geely Holding Group acquired Volvo from Ford during the 2008 American auto industry meltdown. The first new “Geely Volvo” was the XC90. This exchange in ownership also ushers in a new era, making these the first new Volvos to be developed under the Geely ownership. 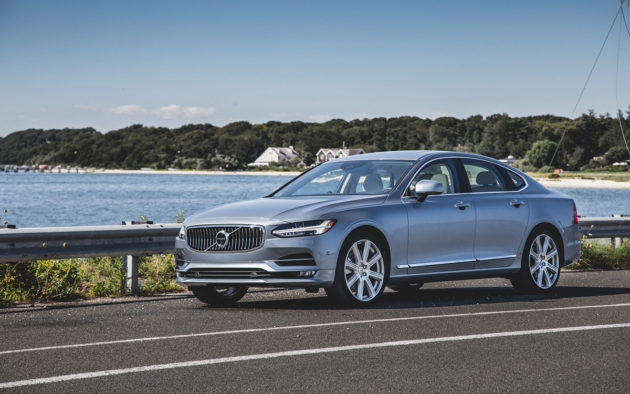 This change in ownership raises plenty of questions since China’s auto industry lacks a positive reputation, especially in the areas of quality control and the protection of intellectual property. Will the new Volvos be cheaply built? Will they continue to be safe as Volvos expectedly are? But mostly, is it still, a Volvo?

In short, the answers to all those questions are: no, yes, and yes.

Because the Volvo S90 rides on the same Scalable Product Architecture as the XC90, it is not surprising the S90 looks like an XC90, but remolded in full-size sedan form. That’s a great thing since both the XC90 and S90 are respectably excellent looking vehicles. The S90 utilizes the same front-end design as the XC90, thus establishing a “signature” aesthetic quality to keep unknowing eyes from mistaking it as something else. 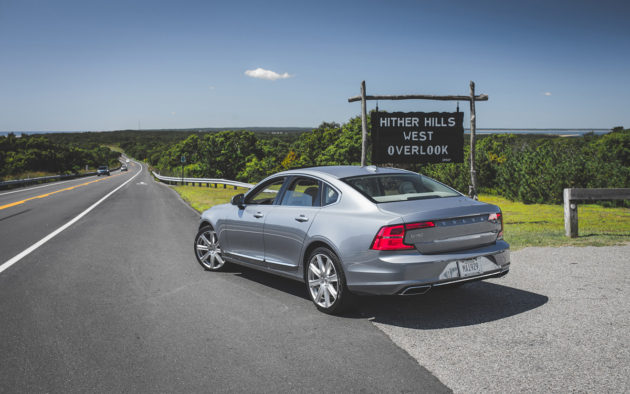 The same “Thor-like” hammer daytime running lights as the XC90 and the preceding Volvo concepts, like the XC Coupe and the Estate Concept, are found on the S90. As is the concaved grille. In every sense, the S90 looks uniquely like a Volvo should in this day and age.

The same sentiments of the S90 being an XC90 in full-size sedan form continues for the interior. Plenty of rich creamy white leather spans throughout, with lots of wood and brushed metal trim on the doors and dashboard. All of the 2017 Volvo S90 T6 Inscription models available for trial featured the same Mussel Blue Metallic and Blond Perforated Nappa Leather hue.

Though the best features of the S90’s interior are in the details. For instance, instead of the average push-button start or even the traditional key, Volvo utilizes a remote fob and a slick center console-mounted rocker knob. It’s ironically reminiscent of the center console-mounted key tumbler location utilized by Volvo’s now defunct rival, Saab. 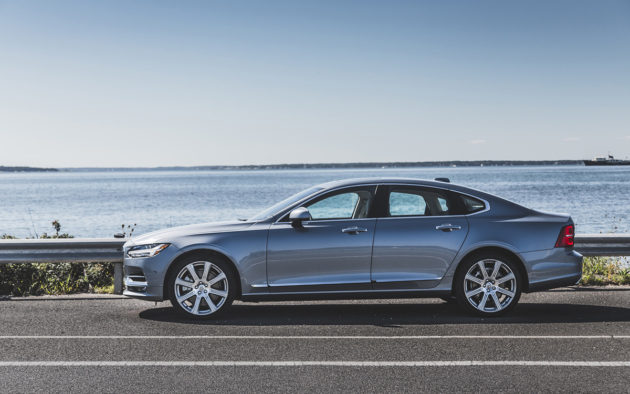 The center control stack features a Tesla- and iPad-like infotainment screen similarly to the XC90. Despite a very techy-appearance, the Sensus Connect touchscreen system is surprisingly a lot simpler to use than it appears. Physical buttons still exist for major controls such as air conditioning temperature and radio volume.

With this clean, simple, and logical layout, the S90 does well to hide all of the complicated technology that it comes chock filled with. The result is that the driver still gets to focus on being the driver, without being overwhelmed and confused by the car’s features. The radio is fantastic too, being a top-of-the-line Bowers & Wilkins 19-speaker sound.

The laundry list of technological highlights live well up to the prowess of safety that Volvo is known for. The S90 boasts lots of standard features that are otherwise optional with the competition, like a world’s first Large Animal Detection system with Auto Brake. It’s designed to bring the car to a halt should one encounter a large deer—obligatory for a country where elk and moose are common road hazards. 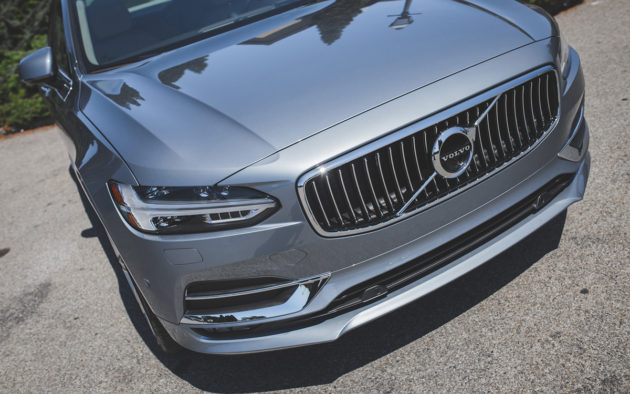 Another world first is the S90’s standardization of semi-autonomous driving tech across all models. It’s called Pilot Assist II and although the S90 isn’t the first with semi-autonomous driving capabilities, it is the first car to make them standard. It can maintain a vehicle’s path of travel on highways at speeds of up to 80 miles per hour and is adaptive to road conditions and hazards. Volvo admits Pilot Assist II is best suited for stop-and-go highway commuting.

Lastly, the S90 incorporates a new and additional world first, featuring Road Edge Detection and Run-Off Road protection. Those systems prevent the drivers from veering off the road for whatever reason.

Naturally, you have the typical arrangement of Apple CarPlay, Bluetooth wireless and traditionally wired connectivity for the radio, Blind Spot Information System, and lane departure warning. 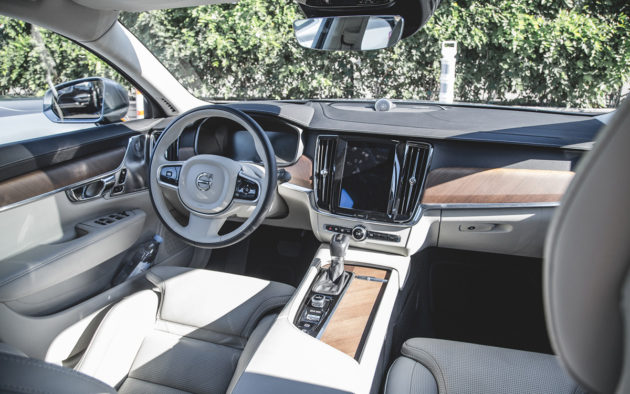 The only interior downside: some of the plastics and materials don’t exude durability. And the white leather, although beautiful to look at, is likely to lose against wear and tear.

At launch, the 2017 Volvo S90 will be available in two forms to start: T5 front-wheel drive and T6 all-wheel drive. Both come with a 2.0-liter four-banger from the latest line of Drive-E mills. The T5 variant on the other hand is turbocharged only, producing 250 horsepower and 258 pound-feet of torque. The more powerful T6 mill is the same 2.0L Drive-F four-pot but with both turbocharging and supercharging to twist out 316 horsepower and 295 lb-ft. The S90 T5 sprints to sixty in just 6.5 seconds while the T6 needs 5.7, both very commendable times. Sitting at the transaxle is a Aisin-sourced eight-speed automatic for both. 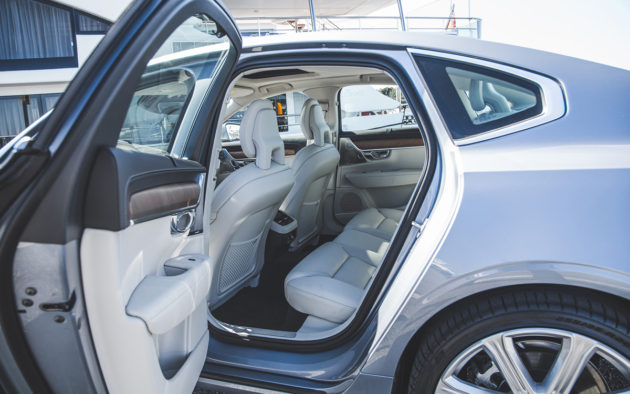 The Volvo S90 cruised around the affluent towns that make up the Hamptons in Long Island, NY. Despite elegant but sedated aesthetics, the S90 garndered many looks from bystanders. It meshed into the wealthy and ritzy parts of town, looking as classy as any BMW, Audi, or Mercedes would. The S90’s on-road behavior is as comfortable as you would expect a European luxury sedan to be. But the absorbent ride did little to compromise level body control and composed handling, thanks in part by the optional rear adaptive air suspension as standard. Interesting side note, despite the clever rear load-leveling suspension, it still utilizes leaf springs, similarly to the current Chevrolet Corvette.

In other words, don’t think the S90 is a tire-roasting 5-Series or Audi A6 competitor because it’s far from it. Instead, think of the S90 as a quiet, competent, and comforting alternative to the status quo, offering a Swedish take on luxury sedans that we’ve come to expect from the Scandinavian country.

Considering a luxury sedan is often a fairly easy process. By default, it’s quite easy to look in the direction of the Germans, Japanese, or the Americans to acquire a luxury sedan. But with the 2017 Volvo S90, buyers once again gain another choice for a luxury sedan with unique flavor. 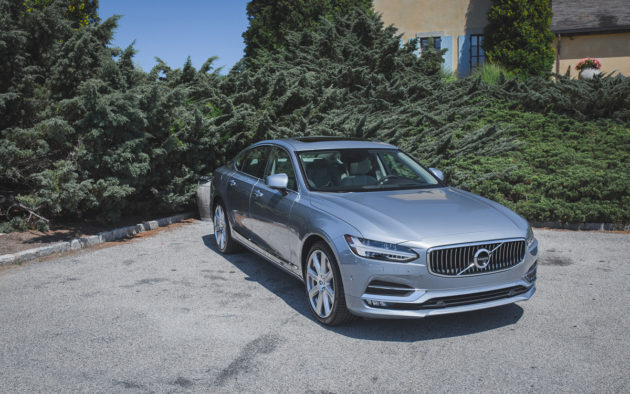 The 2017 Volvo S90 starts at $46,950 without the standard $995 destination fee. The top-spec T6 Inscription model at launch, as tested here, rings up the invoice to $56,250. This puts the S90 right at the frontline with major midsize luxury staples. The list includes the Lexus GS, Jaguar XF, Audi A6, Cadillac CTS, and even the BMW 5-Series and Mercedes E-Class.

With a battlefield like that, the Volvo S90 still faces rigid competition.

Related Topics:2017 Volvo S90Volvo
Up Next