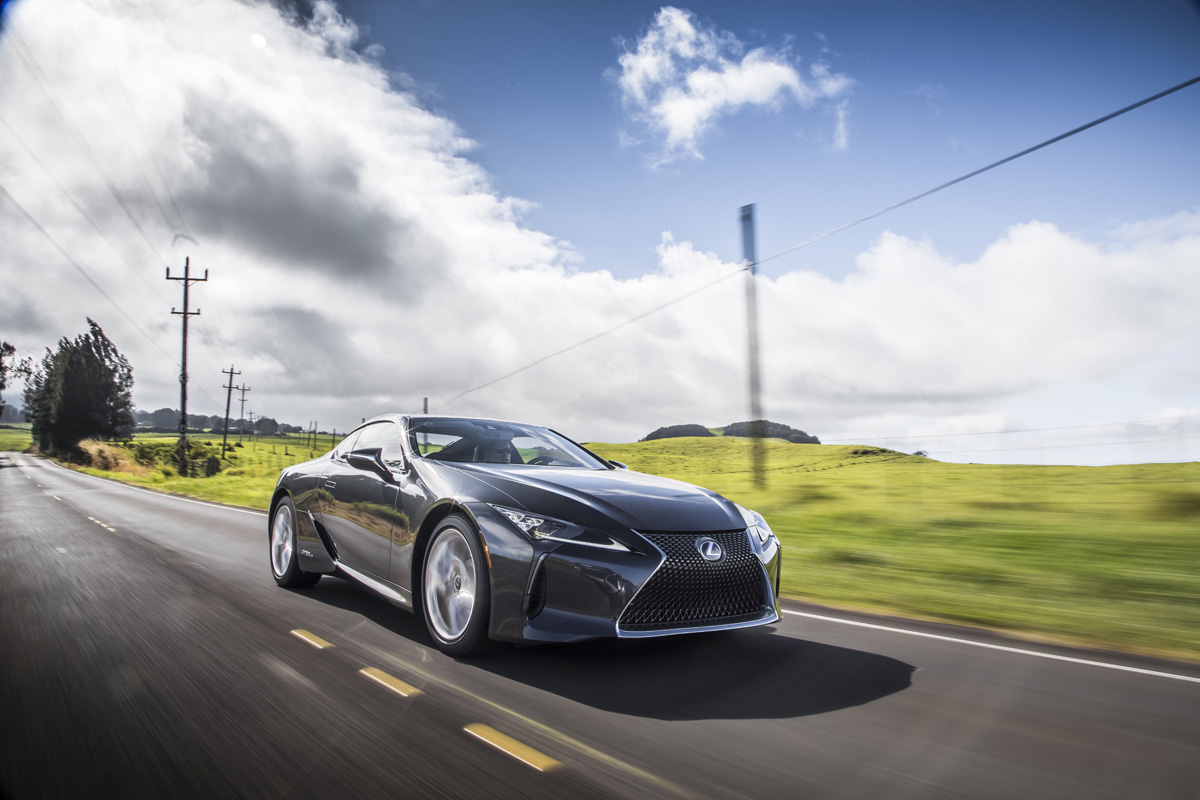 Lexus recently flew me out to the Big Island of Hawaii to drive the company’s new flagship sports coupe, the 2018 Lexus LC 500. And while I was pretty beat after 13-hours of travel, I was all smiles when we pulled up to the Four Seasons Hualalai and saw a fleet of shimmering LC’s parked at the ready.

The LC’s story began five years ago, when the Lexus LF-LC Concept debuted at the 2012 Detroit Auto Show. With arresting styling and dramatic proportions, the concept had the press, customers and enthusiasts and clamoring for a production version, while staying true to the original concept’s design. Lexus accepted the challenge, and as you can see, the results are nothing short of remarkable.

For years, Lexus had a reputation for putting out reliable but “boring” cars. But the past 5 years has seen the brand evolve rapidly, with exciting new models like the NX, RC and IS pushing the envelope with emotional styling and dynamic driving characteristics. The LC 500 is the culmination of this process, and based on the reactions this car got from the locals (every time we stopped, people flocked to us asking questions, taking pictures, and asking us to rev the engine), they’ve got a real hit on their hands. 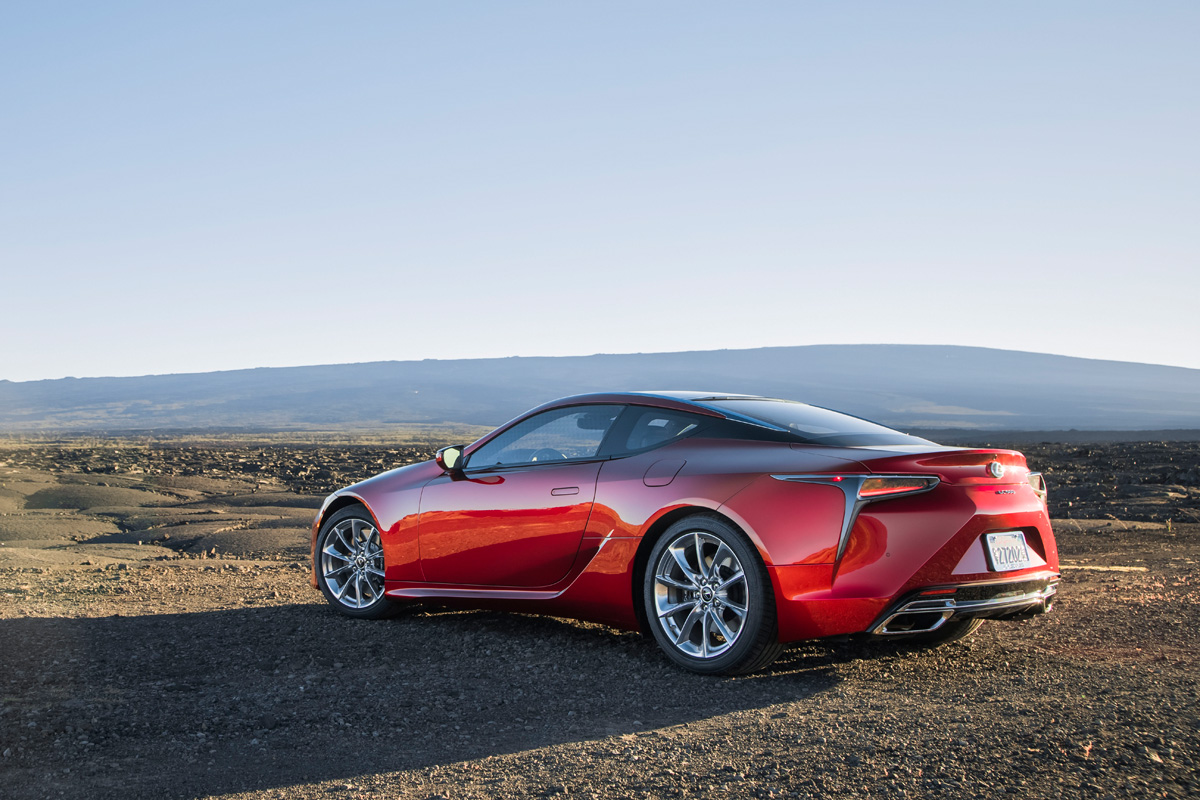 Immediately identifiable as a Lexus thanks to its hallmark spindle grille and dynamic character lines, the 2018 LC 500 represents the most passionate expression of the brand’s design direction. While the spindle grille has been controversial since it’s introduction in the IS, it really works on the LC, with a radical new 3D mesh design that changes visual tension as it spreads across the front of the car. L-shaped daytime running lights beneath new ultra-compact Triple LED headlamps create the distinctive LC front lighting signature.

The combination of a large glass panel (a carbon fiber roof is optional) and blacked-out rear pillars creates a floating roof appearance. The body’s substantial, “planted” look stems from prominent quarter panels that flare away from the center of the car and door panels that are pulled inward. The sweeping roofline tapers rearward between muscular, sloping fender tops, underscoring the car’s wide and stable stance, and the spindle shape is repeated in the rear fascia. Large ducts feed air into the rear wheel arches, the airstream exiting smoothly across the tire sidewall to bolster straight-line stability and steering responsiveness.

Overall, I think the Lexus designers knocked it out of the park with the styling of the LC. There is no question about it, it’s one of the sexiest cars on the market today, standing out from the crowd of boring-looking grand tourers in a big way. After all, if you’re spending $90K+ on a car, don’t you want it to turn a few heads? 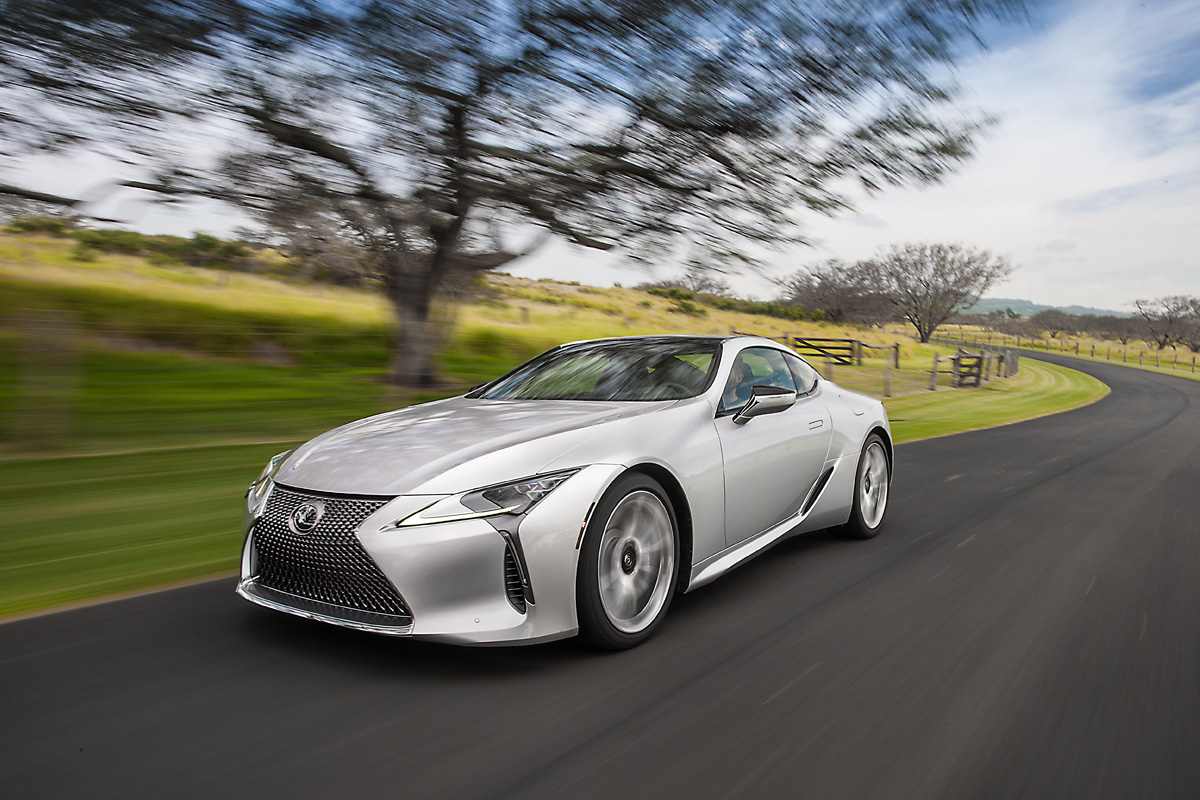 Under acceleration, the LC 500 V8 reveals its character in a continuously rising power curve, with the 471 HP developed at 7,100 rpm and the torque peak sustained from 4,800-5,600 rpm. The engine is happiest when you wring it out to redline, and you’re rewarded with a stunning soundtrack, with the standard Active Exhaust rumbling and roaring like a high-performance GT should. The competition just can’t compare aurally with their smaller, turbocharged engines, as there’s simply no replacement for displacement!

Power is routed to the rear wheels through a 10-speed automatic transmission, a first-ever in a luxury vehicle. Smaller and lighter than some 8-speed units, this new transmission executes shifts at speeds rivaling dual-clutch transmissions, yet with the seamless performance and smoothness of a torque converter automatic. Paddle shifters allow you to take control, but the system is so good that we didn’t really bother with it. And to dial up the excitement to 11, switch into SPORT S+ mode, which extracts the most from the powertrain and transmission shifts and also fully opens the baffles in the Active Exhaust under acceleration. 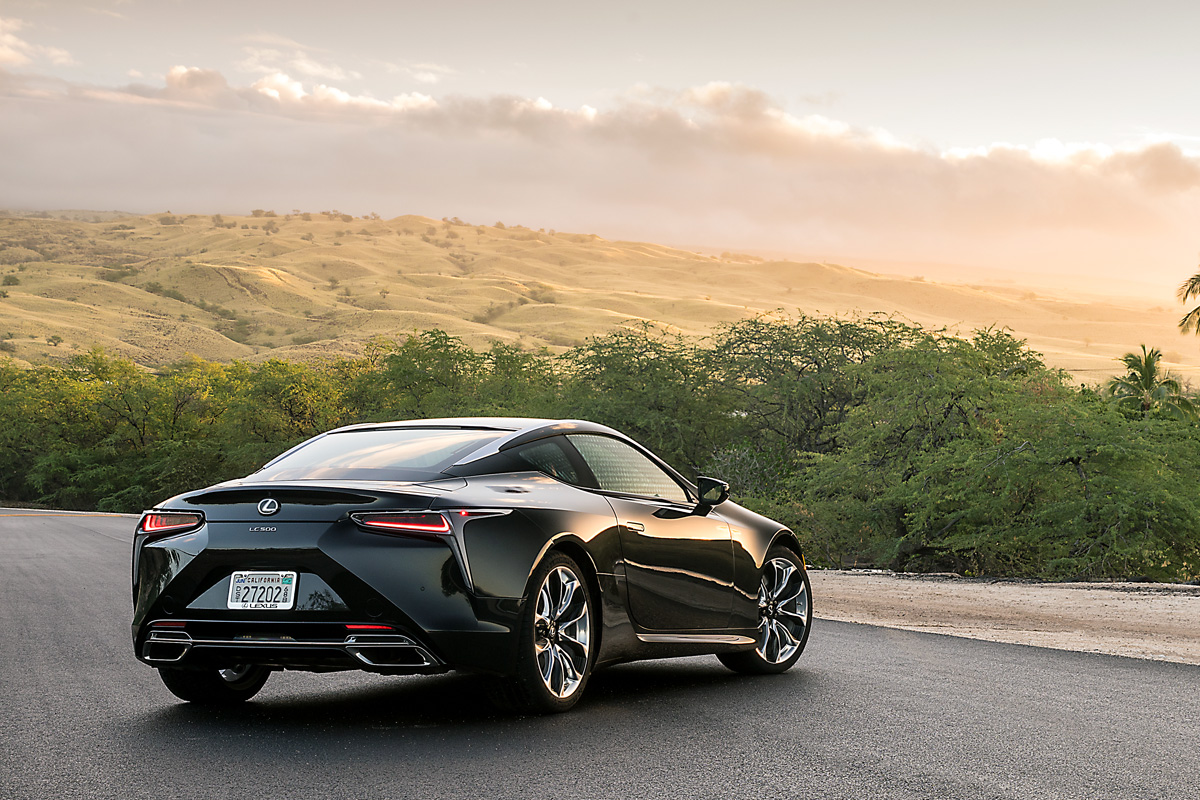 The LC 500 is the first Lexus to use their all-new, premium rear-wheel-drive luxury platform (GA-L), which will also underpin the new LS sedan, and we were suitable impressed with it. Despite the car weighing a not-so-insignificant 4,280-pounds (4,435 lbs. for the hybrid) and a less than ideal 54/46 weight distribution, the car felt downright nimble in the twisties. How’d they pull that off?

According to Lexus engineers, rather than reducing weight they instead opted to arrange the bulk of the mass (including the engine and the occupants) in a position more centralized and lower in the chassis to improve the center of gravity. Couple that with the stiffest unibody the brand has ever produced, along with the LC’s multilink suspension system, and you’ve got a car that exhibits razor-sharp reflexes, exceptional handling balance and rock-solid stability. 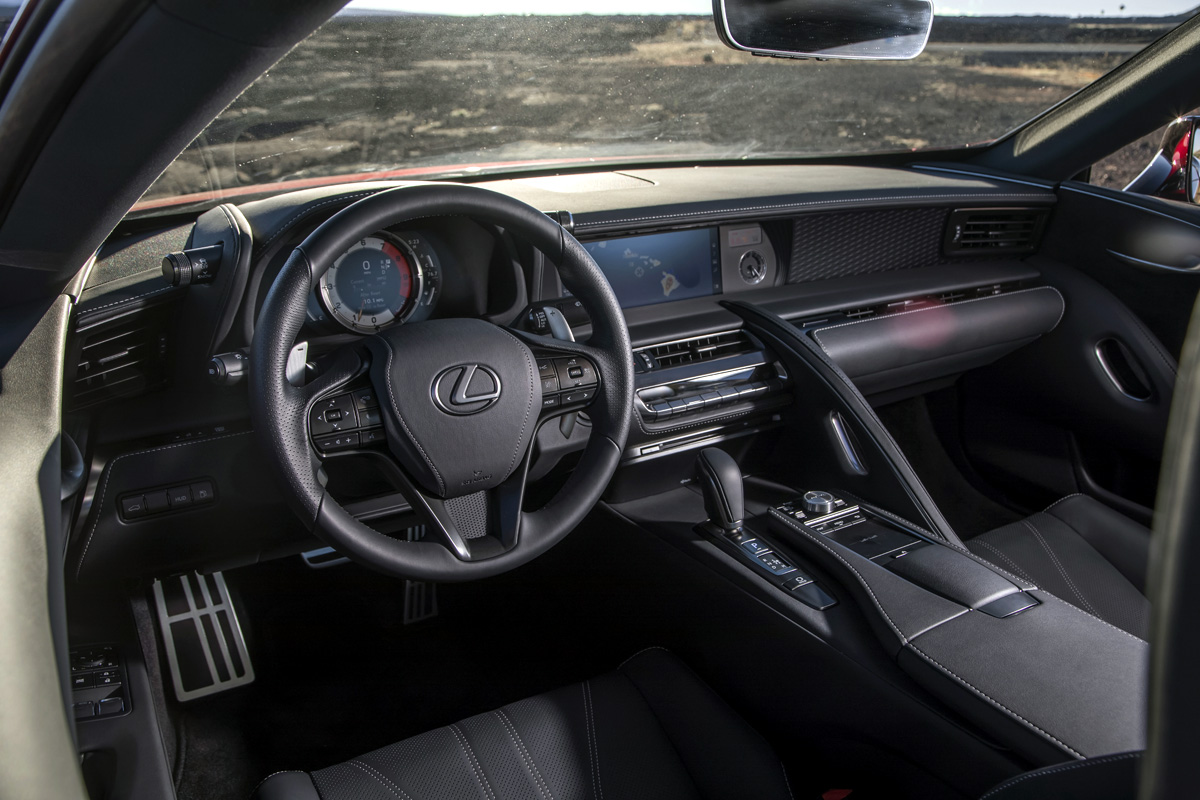 The interior of the LC is a step above anything the carmaker has done before, and strikes a suitable balance between function and comfort, sporting intent and luxury. The leather-wrapped, three-spoke steering wheel (with magnesium alloy paddle shifters), the hand-trimmed leather shift knob, the suede-covered doors, and the sumptuously curved passenger grab handle, the LC 500 has all the premium details you would expect in a high-end luxury coupe.

The front seats offer excellent support and comfort for long drives while available sport seats offer additional bolstering and lateral support during cornering. As for the back seats, they’re best left for small children (or a briefcase), as that sloping roof makes it a bit claustrophobic.

The LC 500 also comes loaded with audio, navigation and connectivity technologies. We loved the 10.3-inch NAV screen on the dash, though the latest version of its Remote Touch Interface touchpad control still isn’t all that easy to use, especially while driving. Audiophiles will love the optional Mark Levinson 13-speaker sound system, which sounds insane. And the Lexus Safety System+, an array of active safety features that can help the driver avoid an accident, or help lessen the consequences of a collision, comes standard. 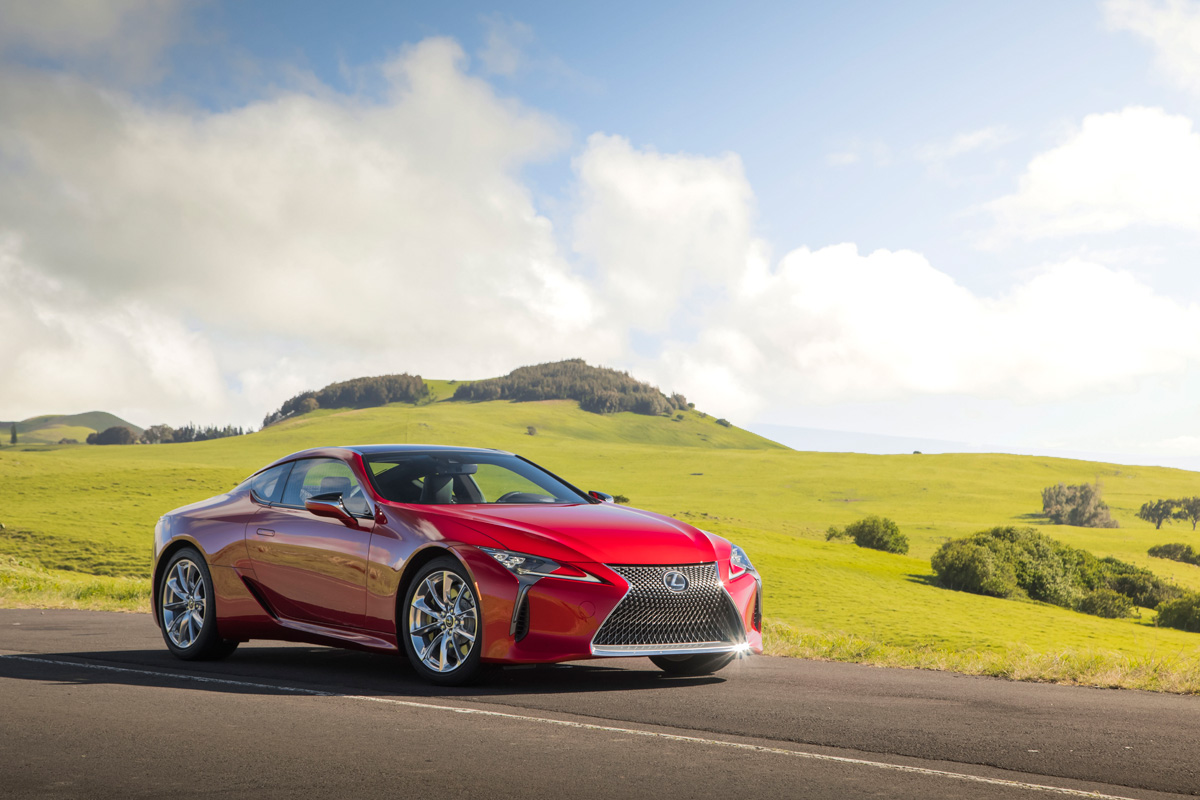 All in all, I think Lexus absolutely nailed it with the LC 500/500h, delivering a halo car that combines stunning design, scintillating performance, long-distance comfort and premium craftsmanship. In my opinion, the LC is a total segment buster, and the BMW 650i, Jaguar F-TYPE, and Mercedes S550 Coupe all better watch out.

Behold The 2018 Camaro ZL1 1LE, The Most Track-Capable Camaro Ever