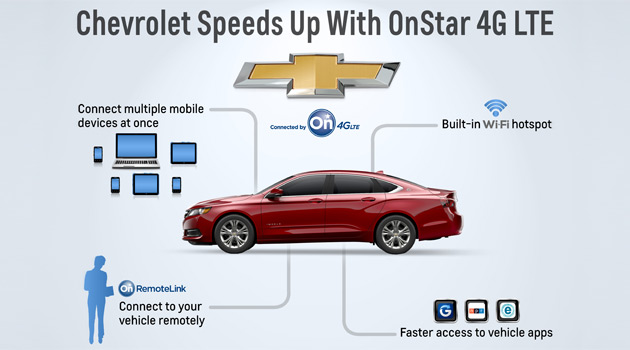 General Motors has announced that OnStar users will soon be able to access sites like GuysGab.com from their vehicles, thanks to in-vehicle 4G LTE connections. The new tech launches with a trial period that lasts three months or three gigabytes, whichever comes first, and will make your car a WiFi hotspot that you can use to access the Interwebz on the go.

The first car to receive the new 4G LTE connectivity will be the Chevrolet Malibu, followed by more than thirty other vehicles in the GM brands of Chevy, Buick, Cadillac, and GMC by the end of the year. This will be the auto industry’s broadest deployment of in-vehicle 4G. The setup will allow those who opt for it to allow up to seven devices to access the Internet via WiFi through a vehicle hotspot system controlled through the infotainment screen.

“Chevrolet, Buick, GMC and Cadillac will be the first vehicle brands to market with 4G LTE connectivity offered on such a broad scale, and we’re excited to give millions of customers an opportunity to explore the technology without paying extra for a data plan for three months or three gigabytes,” said OnStar President Mary Chan. “Later this year, we will begin to offer data plans and our customers will be able to connect for as little as $5 per month.”

Yeah, you read that right. For only five bucks a month, you can read Guys Gab from anywhere through your car. How cool is that? Even better, the antenna on the car is more powerful than the one in your phone, so it has better reception and is more likely to get a connection where your phone cannot.

Pricing is actually fairly good, considering it means 24/7 access to our site. OnStar subscribers can add 200 megabytes of access per month for just five dollars, a gigabyte for fifteen, three gigs for thirty and five GB for fifty. Those who don’t subscribe to OnStar can have the same access for $10, $20, $30 and $50 respectively. GM also says they’ll be rolling out one-time purchase packages for those who just need it for a family road trip or similar short-term use, with daily subscriptions available at $5 for 250 MB or an annual subscription of 10 GB over twelve months at $150 ($5 and $200 respectively for non-subscribers).

“OnStar with 4G LTE is embedded into the vehicle, meaning customers get simple connectivity for not only a Wi-Fi hotspot, but also improved access to traditional OnStar services like vehicle diagnostics, remote vehicle access, and others,” said Chan. “Our customers will also have easy-to-understand data plans to let them tailor a connected car experience around each owner’s lifestyle.”

For those wondering, the coverage for OnStar systems is through AT&T. This may or may not affect your decision to buy.

Nissan Rogue and Amazon Team Up For #GiantLocker