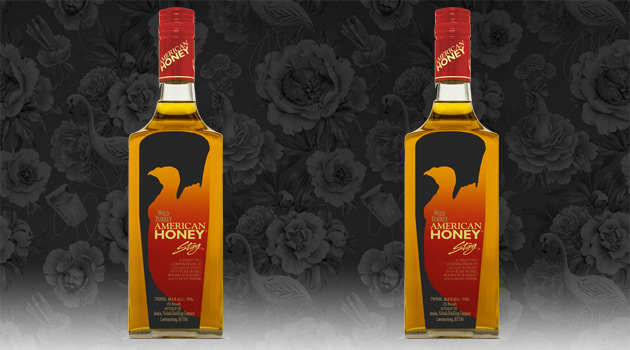 Wild Turkey is releasing a limited edition bourbon this fall, one that packs quite a punch with it’s sweet heat!

American Honey Sting is a tantalizing combination of Kentucky Straight Bourbon Whiskey and pure honey with the kick of one of the world’s hottest chili peppers. While the Ghost Pepper packs a punch that is 400 times spicier than Tabasco, American Honey Sting perfectly balances the heat with the sweetness of honey for a unique flavor that is unexpectedly smooth. Intended for shot occasions, American Honey Sting hails from the highly-esteemed whiskey brand that revolutionized the honey Bourbon category back in the 1970’s.

“I think people are going to get a kick out of how well the heat of the Ghost Peppers goes with the honey flavor. When you take a shot, you get the forward flavor sweetness and citrus of American Honey on your tongue first, followed by the Ghost Pepper that has a subtle heat to it,” said Wild Turkey’s Jimmy Russell, the longest-tenured, active Master Distiller in the world.

Whereas American Honey was originally created to help Bourbon reach a wider audience, with Sting, they’re speaking to a generation of Bourbon-loving legal drinking age Millennials who are looking for new flavors and more spice. In other words, they’ve going after the Fireball crowd!

Wild Turkey American Honey Sting will be available starting in October and comes in 750ml and 50ml bottles, with a 750ml bottle retailing for $22.99. American Honey recommends serving Sting as a chilled shot.

This Fall, It’s All About Sour.. SMIRNOFF Sours!