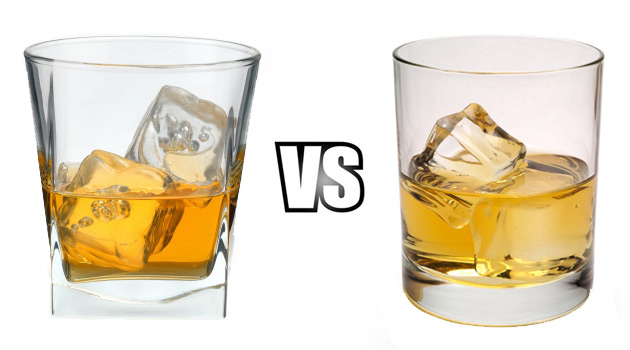 You might wonder what fighting has to do with a good liquor. It’s fairly obvious.

We’re not advocating you go get drunk and get into a fist fight. Instead we’re pitting whiskey vs. bourbon in the ultimate alcohol roustabout. In the end the two are similar enough to love them both, but these two liquors are such a unique part of savoring liquor that they deem investigation.

Have you ever been at the bar arguing with friends over whether you’re drinking a whiskey or a bourbon? Typical Kentucky bourbon is made from corn and aged in barrel, and it is unique to America. The actual legal classification of bourbon includes a grain mixture that is 51% corn, aged in oak barrels, and distilled to no more than 160 proof.

There are basically two types of whiskey: malt and grain. Malt whiskey is made almost exclusively from malted barley. Barley is run through water and made to germinate, then the process is abruptly halted with hot air that dries out the grains. Single malt whiskeys all come from the same type of grain, but may be aged to different years and blended for a unique taste. Blended malt whiskeys are different single malts mixed together.

The result is bliss no matter how you slice it.

Whiskey and bourbon are both complex liquors, and tasting either one is a process.

First, you need the proper glass. Typically a tumbler will work, but a narrow glass akin to a wine glass will also work. What you want is something you can put your nose into. You want to be able to inhale the aroma as you drink, letting the scents color the whiskey. As you take it into your mouth, swish it around your tongue and let it coat your palate.

Swallow the drink let the burn fade. After all of that, you’re tasting whiskey or bourbon.

Just what makes whiskey and bourbon so timeless? There is something mystical about whiskey and bourbon. Something almost untouchable. These aren’t your college student’s drink of choice, these are beverages you mature into. Like wine, you learn to love a particular brand because of its taste or its history. You can visit distilleries and learn more about how the whiskey is made. They are liquors that you bond over, and the industry understands that.

And if you think whiskey and bourbon are men only, think again. A growing number of women are joining the club, so think about that next time you’re picking up on a girl.

So what’s hip for whiskey and bourbon drinkers? What can you order that won’t get you laughed out of a bar, but won’t be something you can’t handle. First off, be prepared to try new things. Before hitting the bar, invite a couple of buddies over, grab a copy of Chinatown and try a few different brands. Here’s how you order:

A good cigar goes well with bourbon and whiskey, but you can have either with a steak too. The smoky flavor compliments many sweet and salty things, so chocolate also works. However you have it, may whiskey and bourbon serve you well.

Tomorrow Is National Vodka Day, How Are You Celebrating It?