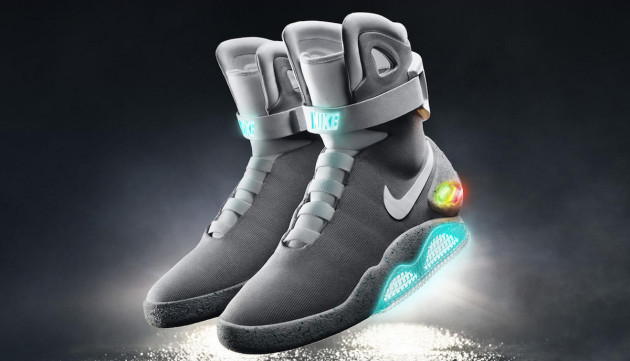 Almost 30 years ago, Nike was asked to collaborate on the iconic movie Back To The Future II, a movie that would feature scenes set in the futuristic world of 2015. They were challenged to imagine sneakers suitable for the inhabitants of the advanced era, and the result was a pair of self-lacing Nike sneakers that became the object of desire for every teenaged boy who saw it, present company included.

In 2011, Nike released a limited-edition Nike Mag, of which only 150 were made available. They were pretty awesome, but the one thing that was missing was that self-lacing feature.

But today, Nike introduced a new Nike Mag, complete with the “power laces” that were missing the last time around. And it seemed only fitting that the first pair went to Michael J. Fox, on Back To The Future Day!

This innovation advances what was coined the Nike Mag’s “power laces,” combining the archetype invention with digital technology. The result is an individually responsive system that senses the wearer’s motion to provide adaptive on-demand comfort and support. But this is just the first iteration.

“By imagining the future, we create it. Product that comes alive, with on-demand comfort and support when you need, product that senses you and adapts to you is right around the corner,” said Nike President and Chief Executive Officer Mark Parker.

If you want a pair of 2015 Nike Mags, it’s not going to be cheap! There are only a limited number of shoes being produced, and they will only be available via auction, with all of the proceeds going to the Michael J. Fox Foundation for Parkinson’s Research. The specific details on the auctions will be posted to Nike News and via Twitter @Nike in Spring 2016.

Learn How To Speed-Tie Your Shoes