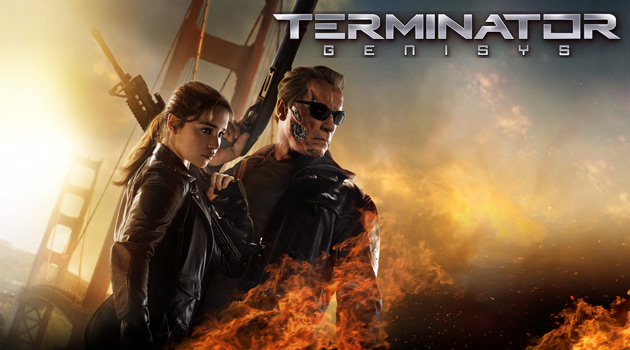 There are some franchises in Hollywood that are well taken care of like gorgeous old cars. They’re taken out rarely, and when they are, they run just as well as ever and are driven with caution and pride. Unfortunately, the Terminator series is more like a really expensive ride that at one time was the best running machine in town until the owner’s son slammed it into a wall. Since then, it finds itself sold to some easily swayed dope who takes it out for a spin, and slams it into yet another wall, or maybe a ravine, so they can say they’re being creative. Yes, for over a decade now we’ve been treated to diminishing returns from James Cameron’s once fantastically original science fiction franchise. In what seems like a last ditch effort to salvage things, the creators of Terminator Genisys have opted to go back to the franchise’s roots in order to give it a fresh start. It’s a novel idea, but unfortunately, some novels should just remain on the shelf.

We open once again in the near future, as a human resistance lead by John Connor (Jason Clarke) fights against the last pockets of the all powerful artificial intelligence called Skynet. In the final battle of this years long war, the humans find themselves victorious, but with a bit of a catch. Skynet has sent a terminator back in time to kill John’s mother Sarah (Emilia Clarke), and in order to stop it, John sends back Kyle Reese (Jai Courtney) to protect her, and outside of Kyle’s knowledge, father him. However, when he travels back in time, an unforeseen ripple creates a new timeline, and instead of the scared waitress Kyle is told he will find, he’s met by a battle-ready Sarah who already has full knowledge of what she has to do thanks to a guardian Terminator called Pops (Arnold Schwarzenegger) who has raised her since her parents were murdered when she was nine.

Terminator Genisys tries to have it’s cake and eat it too by re-hashing the plot of the original Terminator while creating this alternate timeline to allegedly play in. All of that is well in good in theory, however it seems as though nobody involved with the writing of the film actually knew what the word “play” means. If this movie were to make more nods to the original films, it would break it’s neck. Despite having every opportunity to do something different with the mythology of this world, we get the same “mean metal guys chase the good people and their friendly robot” movie that has already been done a few times before, without the flair that made the first two films in the franchise so great. Even the supposed twists (which have almost entirely been spoiled by the trailers) feel milk-tossed, acting more as lazy attempts by the filmmakers to blind the audience to the fact that they are still telling the exact same story. Themes that were once so powerful, particularly those involving the flexibility of the future depending on the will of those in the present, now play more like set-ups for further sequels than anything else, since we know that is exactly what is being planned.

Meanwhile, every single actor in the movie suffers under the weight of a plodding script and borderline non-existent direction from Alan Taylor (Thor: The Dark World). Starting off with the worst, Courtney is absolute poison as Kyle Reese, unable to sell either the dramatic heft nor the supposed comedic side of his character. See, the script would really like us to think that this guy has charisma, as he keeps making jokes, but none of them are funny. Every line out of his mouth sounds so much like cardboard that he might as well spit packing peanuts. Jason Clarke isn’t given much of a chance to characterize John Connor beyond a couple of generic “oo rah” speeches before his character takes the aforementioned brutally spoiled villainous turn. Although he certainly seems to be having fun, he just never quite clicks with it, and is never particularly threatening. On the slightly more positive end, Emilia Clarke makes for a solid Sarah Connor, with both heart and brawn to spare. However, even she struggles with making some of this dialogue sound good, especially when she is forced to attempt chemistry with Courtney. Meanwhile, Schwarzenegger is as loveable a ham as ever, but his character lacks the presence that he had before, almost feeling like a non-entity. His relationship with Sarah is the only slightly interesting thing about him, and that is not explored nearly enough to make an impact.

If there’s anything all of the Terminator movies have excelled at, it’s been the crafting of spectacular action. Well, Genisys certainly distinguishes itself here, with what are by far the worst combat sequences the series have seen. Not only are the same robotic effects and fighting styles recycled from previous entries, but they’re brought to life with the flair of a tumbleweed. It just feels like hallow CGI objects hitting and shooting at each other, especially considering that the visual effects are some of the worst that have been in a big budget movie in quite some time. If this thing were to air on SyFy, it would not be out of place, some of the bigger set-pieces resembling PlayStation 2 games from 2004 more than anything we’re used to in this day and age.

Sure, it’s one thing for a film like this to be bad, but Terminator Genisys stretches beyond that into borderline insulting territory. The sheer laziness of just about every aspect of this story is simply astounding, the filmmakers seemingly thinking that if one or two tiny spots are freshly washed on an old windshield, we will just happily drive off none the wiser. We won’t. Perhaps next time, a T-1000 should take the form of a dead horse, just so when Arnold goes to fight it, at least those involved will show some honesty.

London Has Fallen In The First Trailer For The Action Sequel

How To Skip The Annoying DVD Trailers and Warnings