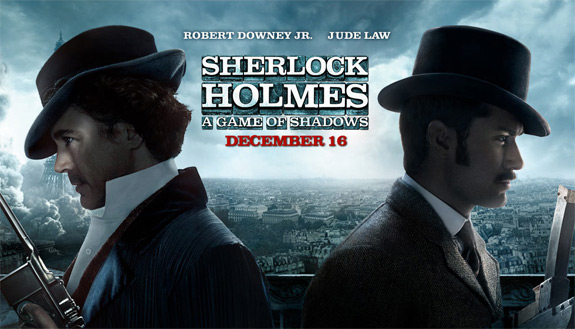 Robert Downey Jr. reprises his role as the world’s most famous detective, Sherlock Holmes, and Jude Law returns as his formidable colleague, Dr. Watson, in Sherlock Holmes: A Game of Shadows.

Sherlock Holmes has always been the smartest man in the room.. Until now. There is a new criminal mastermind at large–Professor Moriarty (Jared Harris)–and not only is he Holmes’ intellectual equal, but his capacity for evil, coupled with a complete lack of conscience, may actually give him an advantage over the renowned detective.

And here’s the original trailer from back in July:

Sherlock Holmes: A Game of Shadows comes out in theaters on December 16th.