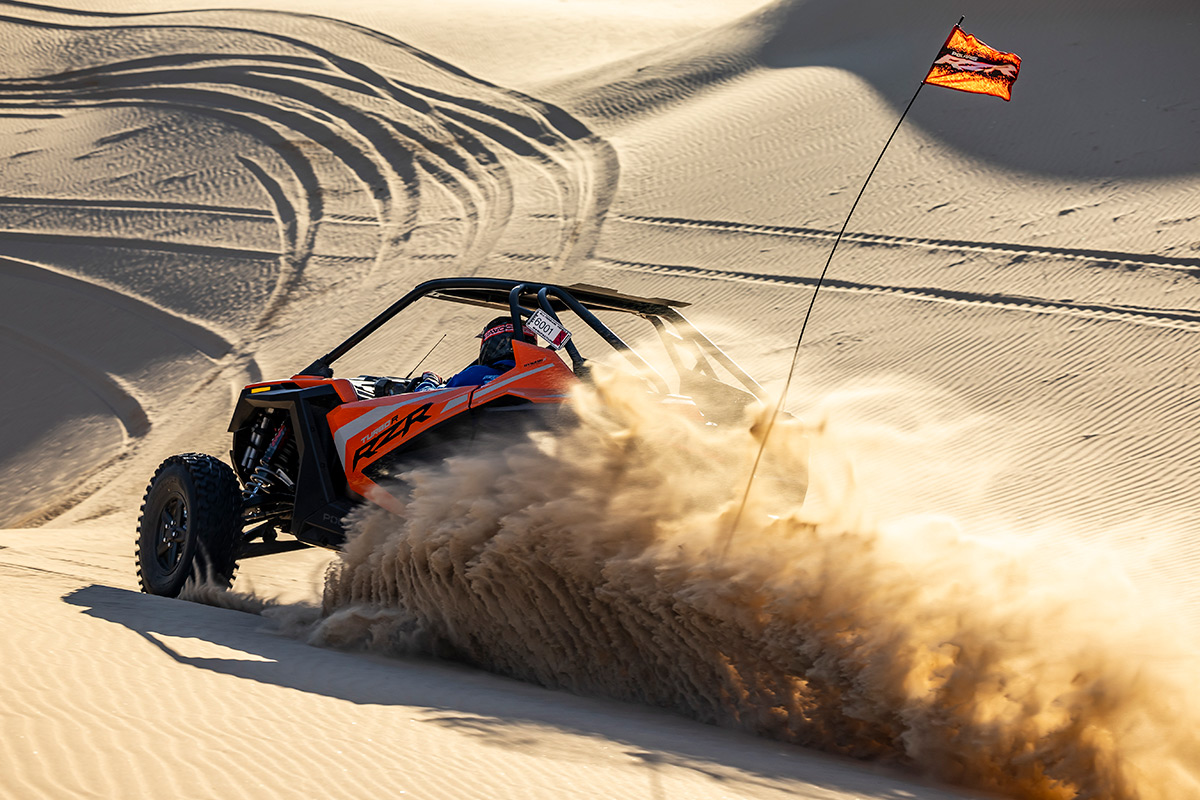 If you’re someone who is into UTVs, you’ve likely heard of Camp RZR, an epic weekend-long celebration that Polaris hosts annually at the Glamis Imperial Sand Dunes, one of the world’s most renowned off-roading destinations. Started back in 2012 as a way to say thank you to the side-by-side community, it has grown considerably over the years, with over 100,000 people in attendance this year, eager to hit the dunes after a two-year hiatus due to the pandemic.

For years now, I’ve watched footage of sweet ATVs, UTVs, and off-road vehicles ripping around the sand dunes of Glamis, wishing that I could try that for myself, as my experience with UTVs have been mainly limited to dirt and muddy trails. Sand? That sounded like a whole lot of fun for a thrill seeker like myself. So when the folks at Polaris asked if I would like to attend Camp RZR 2022 as their guest, it took me exactly 0.05 seconds to say “Hell yeah!”

A few weeks later, and I was beginning to second-guess my decision. Here I was strapped into a Polaris RZR Turbo R at the crack of dawn, staring up at an imposing 400+ foot-tall sand dune called China Wall, and being told to floor it, follow the tracks of the UTV in front of me, and trust the vehicle to make it up this massive mountain of sand. Oh yeah, and don’t stop along the way, because you could end up rolling it. What the heck had I gotten myself into?! 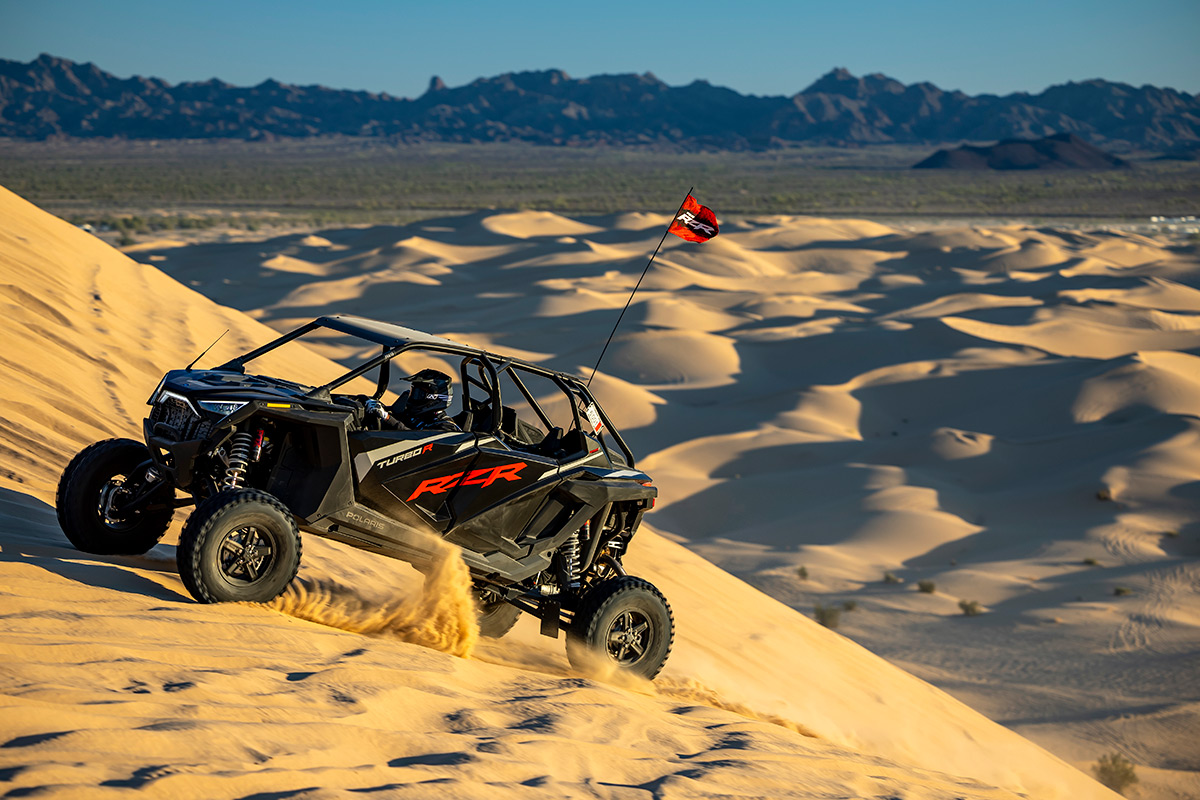 But there was no time to think about this. Soon I was getting the signal to go, so I said a quick prayer, mashed the pedal to the floor, and hung on for dear life. Amazingly, the RZR raced up this impossibly steep dune with ease, and before I knew it, I was at the top, grinning from ear to ear. We made our way back down to the bottom (an equally hair-raising experience) and did the hill climb a few more times, at which point I was screaming with excitement.

THIS is what Camp RZR is all about, giving off-roading enthusiasts a weekend that they won’t soon forget, allowing them to shred sand on their two or four-wheeler of choice. That’s right, while Polaris might be putting on the event, its open to anyone and everyone who wants to attend, regardless of their preferred choice of wheels for the dunes. Of course, their hope is probably that after seeing so many sweet RZRs, you may want to trade in your ride for one.

Not only that, but Polaris knows that mechanical failures can happen, especially when you’re hooning around the dunes, as it’s a rough environment. So they set up on-site service bays that offer free parts and service, so that you can get your RZR back out onto the dunes, rather than having your weekend come to an end early. It’s not uncommon for the repair crews to service 400-500 UTVs throughout the weekend. Now that’s pretty amazing, right? 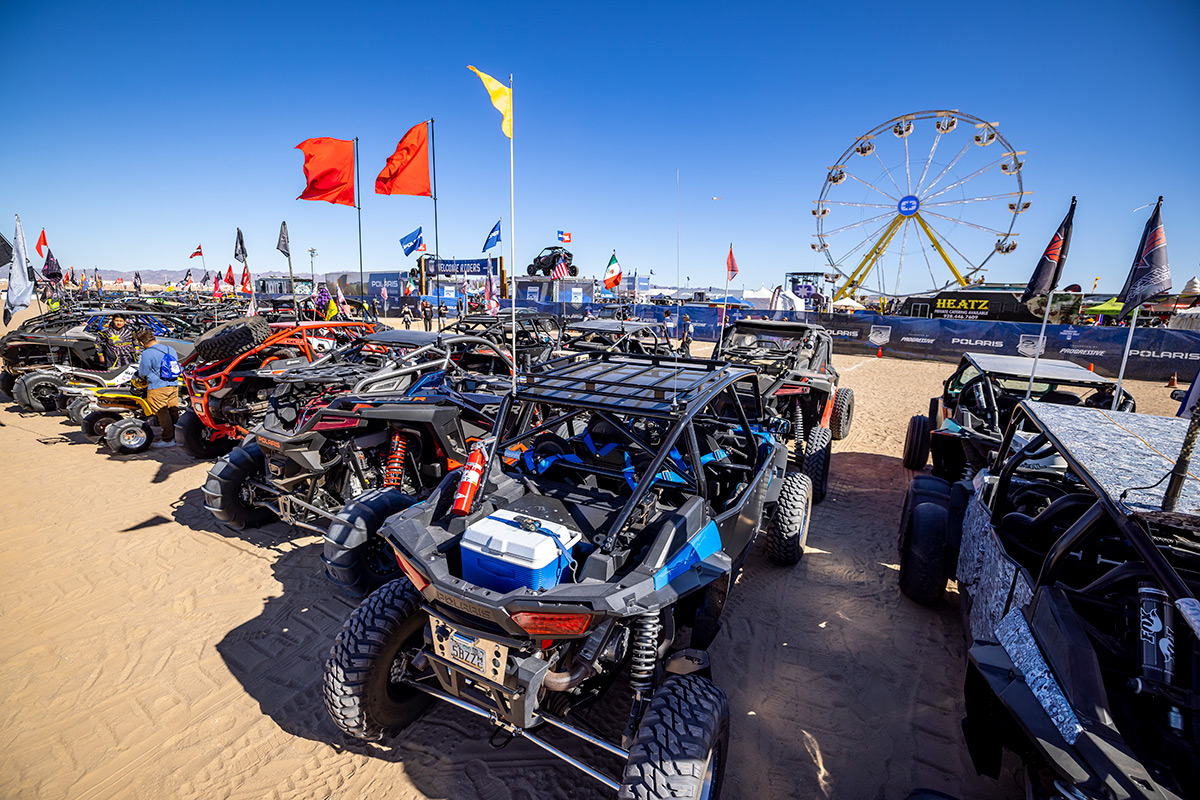 It’s also pretty awesome to see the camaraderie amongst the riders. At one point during our ride, we saw someone who got their rig REALLY stuck, and people from far and wide rushed to their aid, working tirelessly until they freed his vehicle from the sand. Traffic can also get a bit crazy as the day goes on (which is why we got an early start while most folks were still asleep), but everyone’s pretty mindful of one another to avoid potential accidents.

Glamis itself exceeded my wildest expectations. The Imperial Sand Dunes Recreation Area is the largest off-highway vehicle recreation area for sand dunes in the U.S., with golden sand as far as the eye can see, stretching over 118,000 acres and offering clear views into neighboring Mexico and Arizona. The constantly shifting winds of the valley make for ever-changing slopes and bowls, so you always want to keep looking ahead for what’s coming next. Needless to say, riding the dunes is quite an adrenaline rush.. and really sandy. 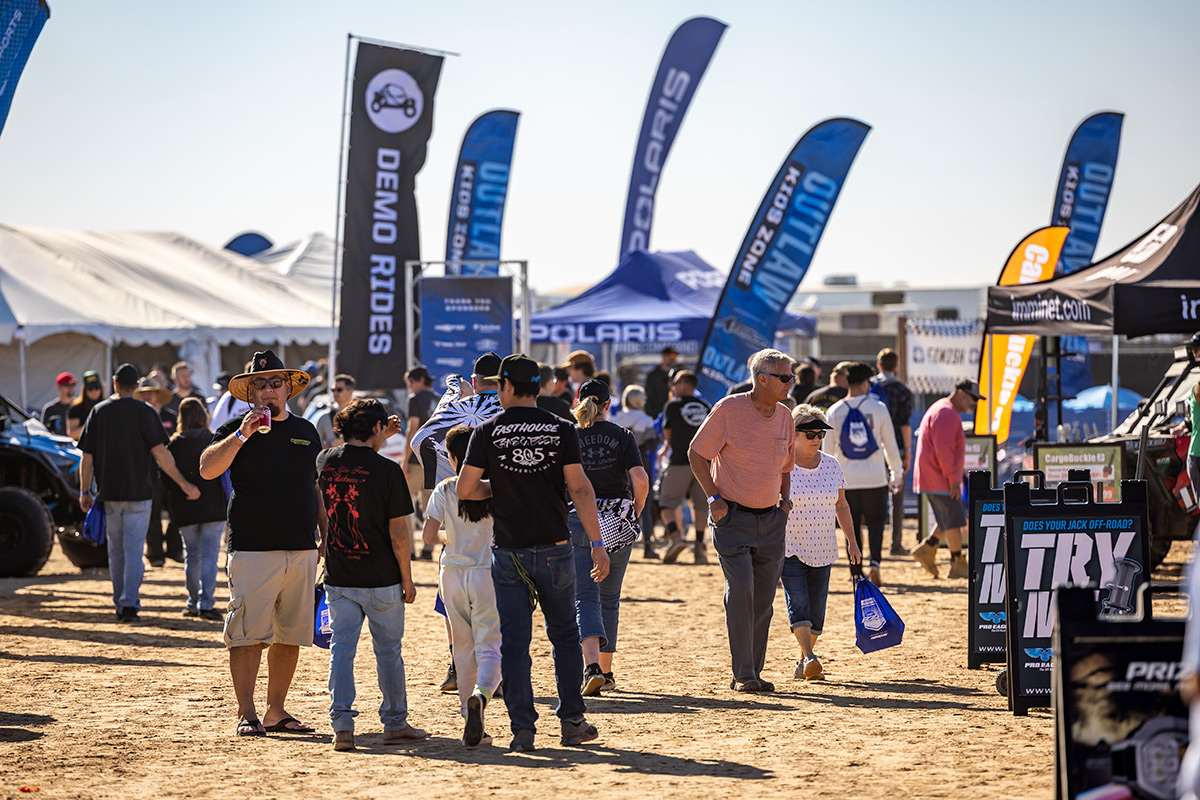 When you’re ready to take a break from riding the dunes, RZR’s Vendor Village Camp offers a plethora of things to see and do. We’re talking food trucks, vendor booths, aftermarket parts, customized rides, technology displays, demo rides of RZR Pro R and RZR Turbo R, a kids zone, along with a massive Ferris wheel that can be seen from miles around. At night, they had live musical performances from Pennywise and Face to Face, which was very cool.

Guests also have the opportunity to meet top Polaris RZR racers and ambassadors, including Tanner Foust, RJ Anderson, Casey Currie, Blake Wilkey, and Heavy D Sparks of Diesel Brothers fame. I actually got a chance to sit down and talk with Tanner Foust about Camp RZR, and he loves what it’s all about, and especially how it’s become a family affair, with kids taking part in the weekend and carrying on the love of the sport for the next generation. Casey Currie also took me and a few other media guests for a ride-along, which was pretty surreal. 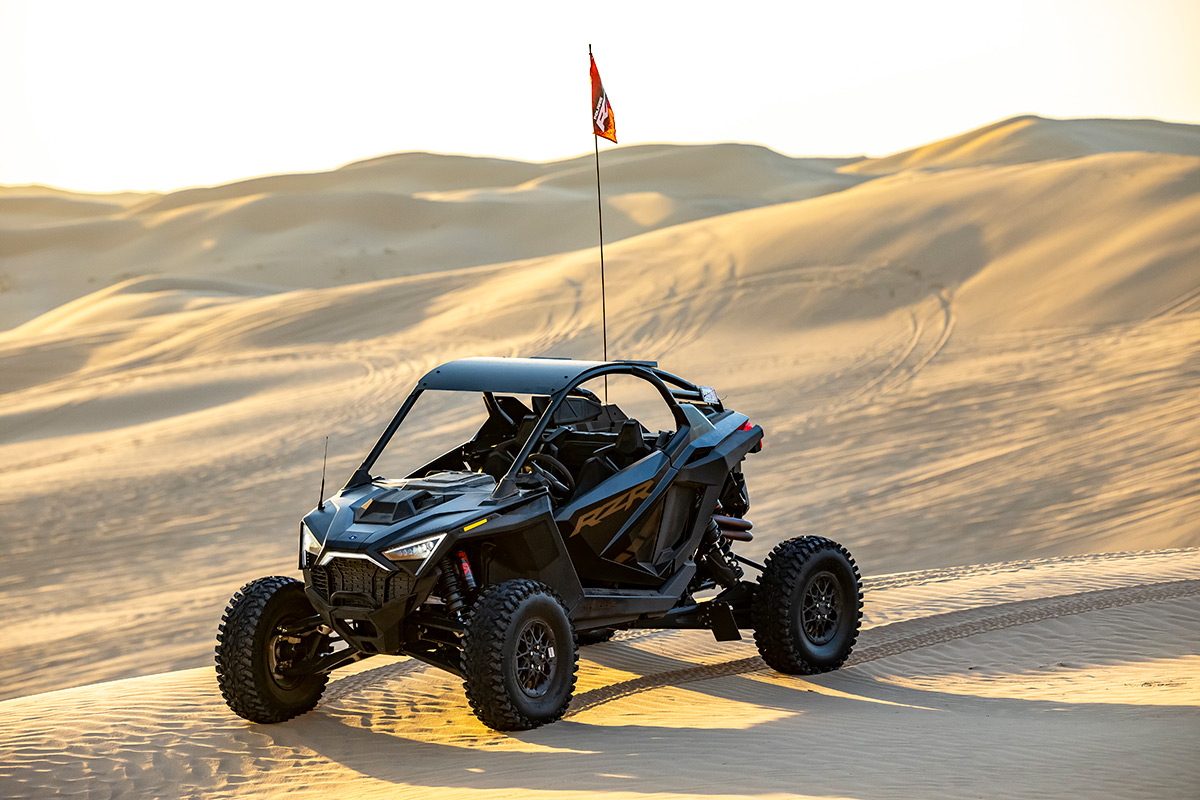 As I said, I’m no stranger to UTVs, having ridden quite a few of them in the past. But this was my first time riding dunes, and it was quite a unique experience. Off-roading in sand isn’t like regular terrain. The best way I can describe it is like how when you’re walking in fresh, deep snow and how your leg sinks down deep. The same holds true for sand, so momentum is your friend. Stop in the wrong place (going up a hill, in deep sand, etc), and you could get stuck.

Steering in sand is more like sliding than turning, similar to rally racing, so you always want to be looking ahead. Dunes also come riddled with hazards, including unexpected holes called “witch’s eyes” and steep drop-offs. The best way to navigate these is to angle your way up the dunes to scope out the far side rather than driving straight up them, so you don’t end up going over nose first and taking a header. 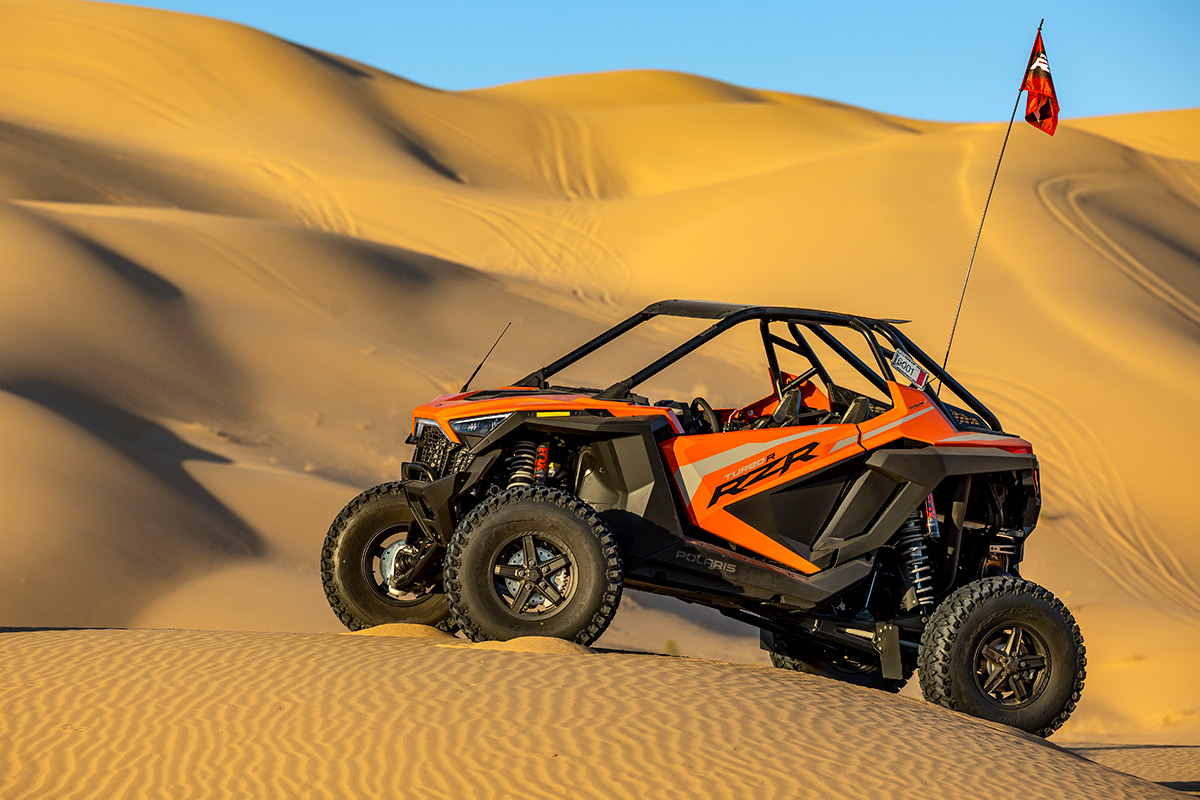 Riding in groups is also a must, because it’s very easy to get turned around in the dunes and lose your way, especially when you’re surrounded by endless miles of sand. I actually had that happen on my last run, as I was giving the person in front of me some room, as I was getting pelted by sand, and before I knew it he had raced off and I lost sight of him. Thankfully, RIDE COMMAND+ allowed me to see where they had gotten to, and I was able to find my way back to the group.

Proper gear is also essential when riding the dunes, as sand is not forgiving in the least. A full-face helmet, goggles, neck gaiter, gloves, and a long-sleeved shirt or jacket will keep you safe from the elements for the most part. Even with all of that, sand still managed to find a strip of my forehead that wasn’t fully covered, and I ended up with some irritated skin afterwards. Yes, it’s no fun being all covered up in the desert heat, but the alternative is even worse. 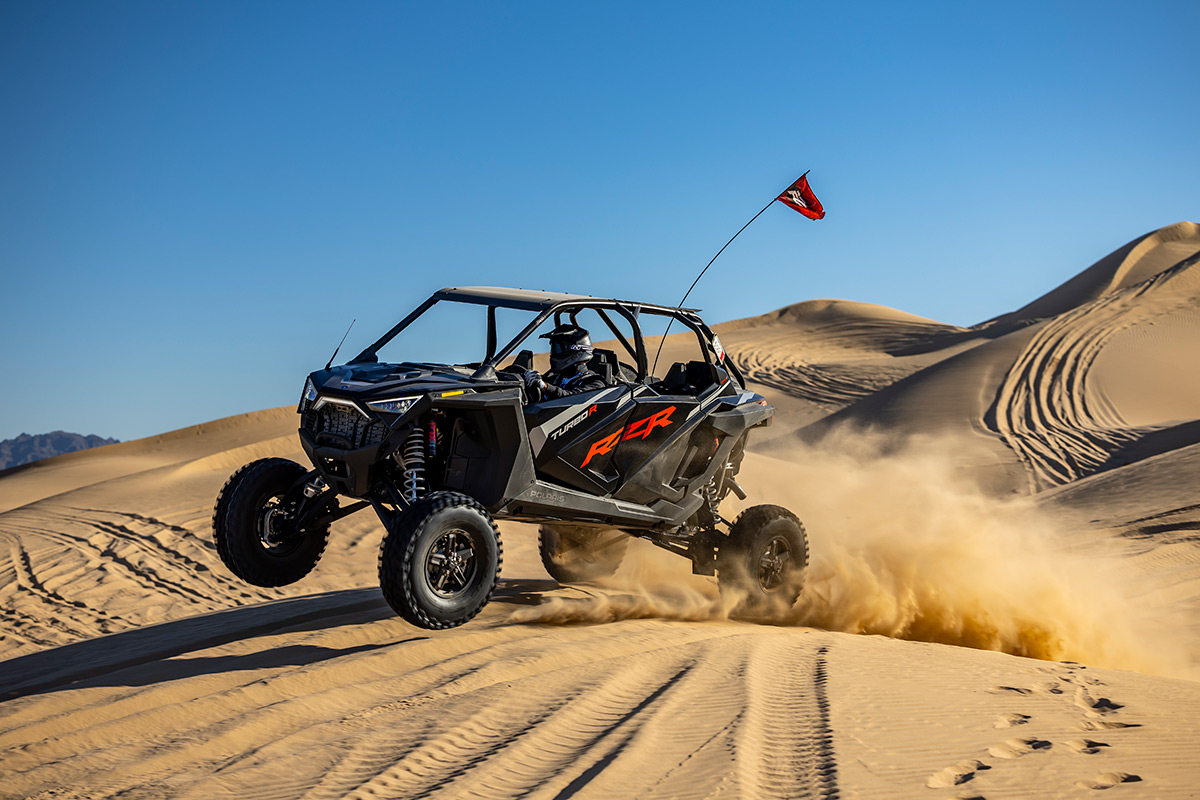 I spent most of my time on the dunes behind the wheel of a Polaris RZR Turbo R 4, and it’s by far the best UTV that I’ve ever driven. Powered by a 181-HP turbocharged engine combined with a wide 74″ stance and big 28″ suspension, this bad boy delivers eye-opening acceleration with unbelievable stability so you can tackle big terrain.

Taking on the most challenging off-road conditions requires extreme durability, and the Turbo R 4 delivers with a rigid one-piece chassis with a boxed and stamped-steel suspension. And from the innovative geometry upfront to the game-changing travel in back, the Turbo R 4 has impressive suspension giving you the confidence to chase bigger thrills. 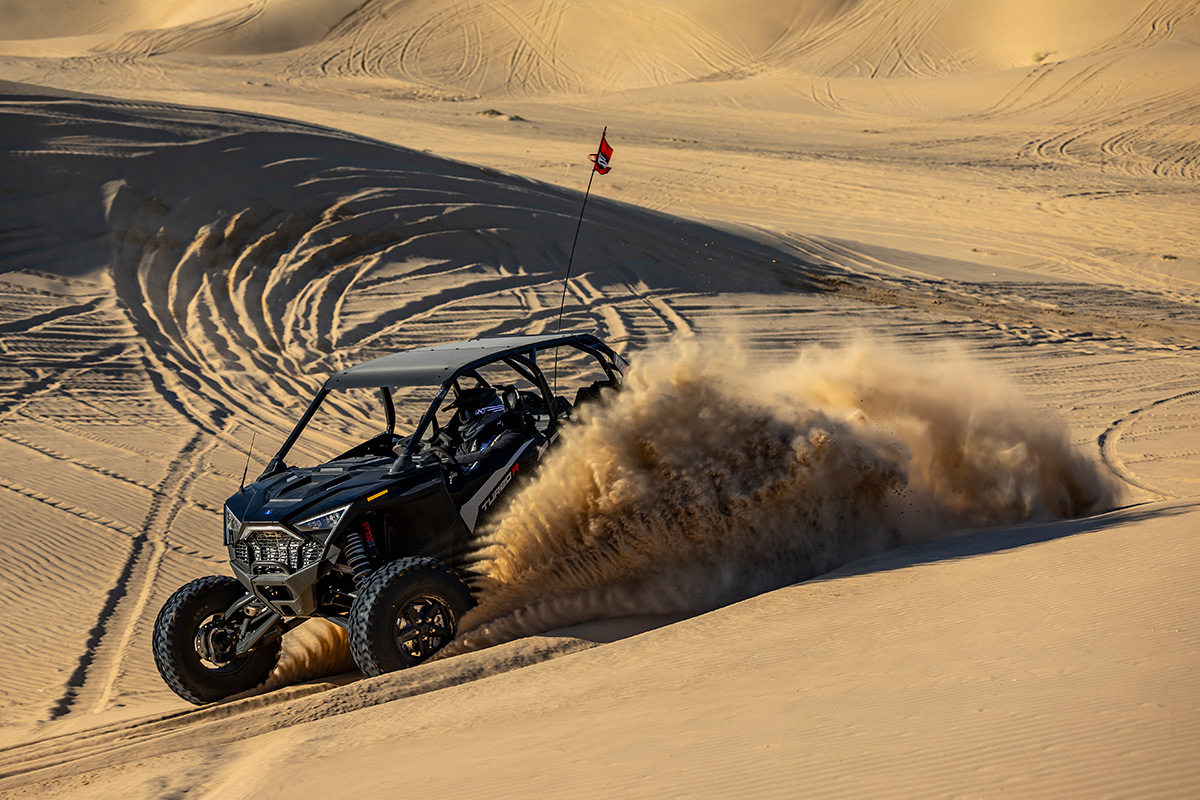 While the two-seat Turbo R is a bit more nimble and easier to get airborne when hitting sweet jumps due to its smaller size and weight, I actually preferred the stability that the four-seater offers, especially on uneven terrain like this. Plus, if you’ve got a family, you can take everyone out for a ride, which is a lot more fun.

Pricing for the RZR Turbo R 4 starts at $31,999, while a loaded Ultimate model tips the scales at right around $40K. Not exactly cheap, but you get a lot of bang for your buck. 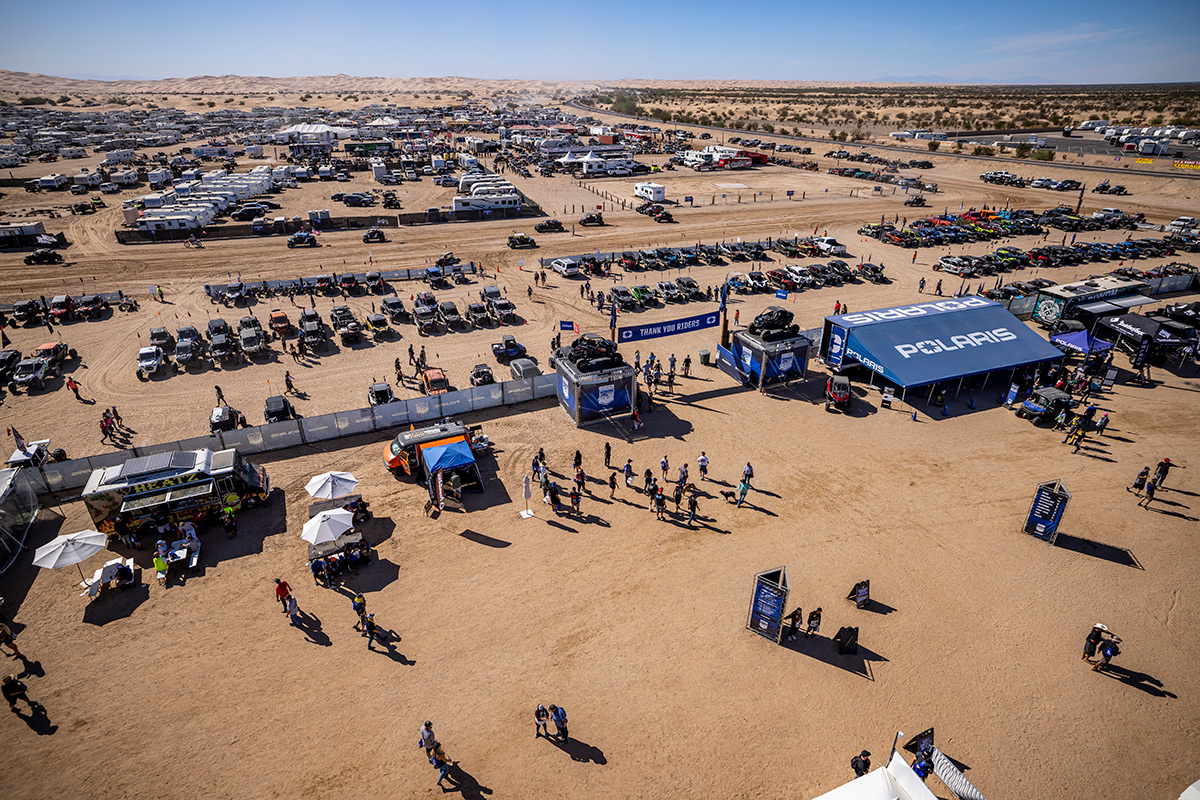 There’s no doubt about it, Camp RZR was an incredibly fun and memorable event, one that I won’t soon forget. And I was really impressed by how well organized it was, as putting together something of this scale is no easy task. Needless to say, if you’re into OHVs, Camp RZR should definitely be on your bucket list, especially if you’re local and have your own ride. And even if you’re not, you always fly in and rent something to ride for the weekend.

Camp RZR is one of the largest gatherings of off-road UTV enthusiasts in the world, and after spending a few days in Glamis, I can totally see why. And the fact that it’s completely free to the public as a way to give back to the powersports community? Pretty amazing. 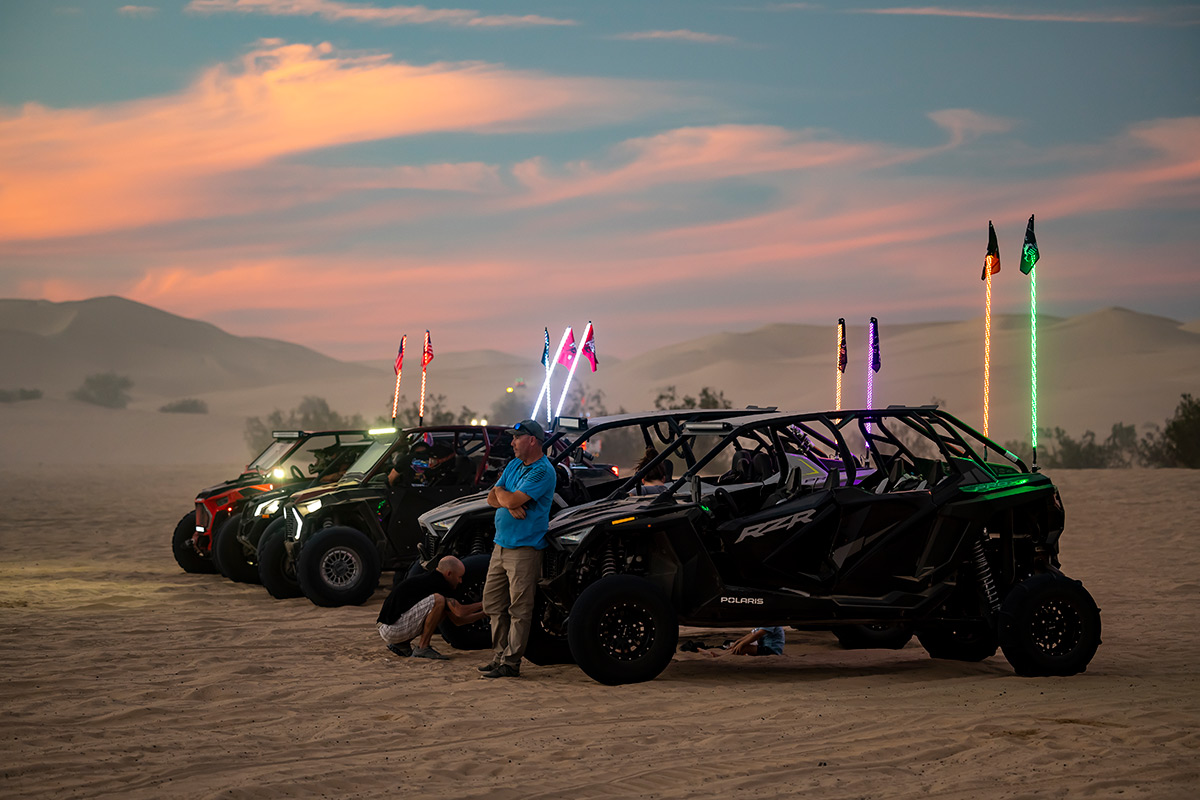 Looking For Good Mileage: 7 Most Fuel-Efficient Diesel Trucks To Consider