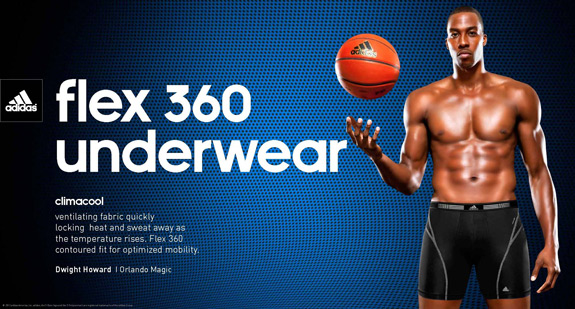 I sweat like a mofo and usually have a bad case of swamp ass after playing basketball, so I figured I’d try out the FLEX 360 and see how they fared. If Dwight Howard swears by them, that’s good enough for me.

I normally wear loose boxers, so wearing compression-style boxer briefs was a little confining at first.. Not a lot of room for the boys to breathe.

But once I got used to that, I found that the FLEX 360 delivered as advertised, keeping my nether regions cool and comfortable throughout the entire game! Another benefit was that I didn’t have any chafing, which is sometimes a problem when I’m really active.

The FLEX 360 costs $20, which isn’t cheap by any means. But it’s well worth the money, especially if you’re active and looking to keep cool “down there”.

You can pick up a pair from adidas.com or Dick’s Sporting Goods.