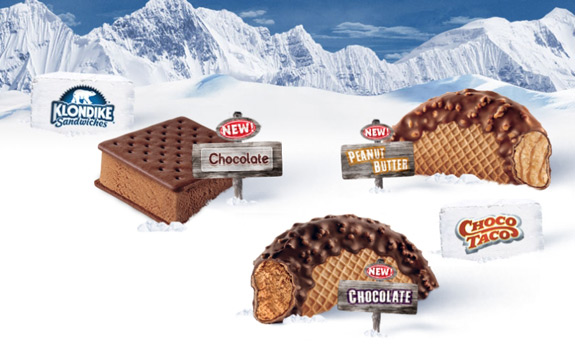 When you think of Klondike, you probably think of those old commercials from the 80s..

“What would you do-o-o for a Klondike bar?”

But the brand continues to expand it’s ice cream offering. Last year, I couldn’t get enough of the What The Fudge? Brownie Sandwiches and the Oreo Cookie Ice Cream Sandwiches.

Now I’ve found my new favorite treat – The Klondike Chocolate Choco Taco! It’s much like the old Choco Taco (which features ice cream in a sugar taco with a dark-chocolate-flavored coating and crispy rice). But instead of having vanilla ice cream, you get chocolate ice cream.

It’s awesome, trust me. I’ve been eating Choco Tacos since I was a kid, and they’re one of the few things that’s gotten better with age. The addition of chocolate ice cream takes this treat to the next level!

The next time I’m at the supermarket, I might have to try Klondike’s new chocolate ice cream sandwich, as that looks pretty yummy as well. 🙂

Hooters Girl Shows You How To De-Bone A Chicken Wing