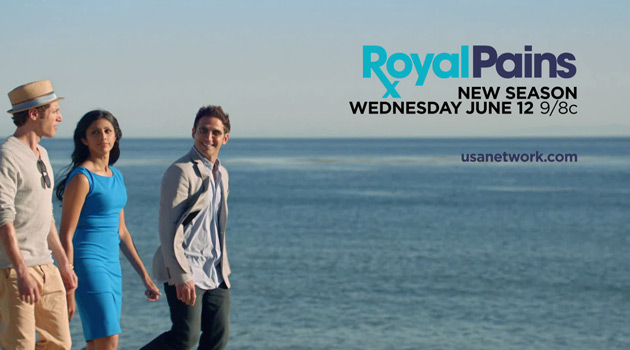 Summer isn’t in full swing until Royal Pains starts again on USA Network. And thankfully, you don’t have much longer to wait – Season 5 premieres on Wednesday, June 12th at 9/8c!

When we last left off, Evan and Paige were in the midst of their “royal” wedding, but Hank’s health left the gang worried.. Here’s a sneak peek at the new season:

To celebrate the kickoff of the new season, we’re giving away a Royal Pains Prize Pack to one lucky reader. The winner will receive a Royal Pains Bocce Ball Set, a Royal Pains Canvas Bag, and a Season 1 DVD!

Want to be entered to win? E-mail us and put “I love Royal Pains, pick me!” in the body of your e-mail. We’ll pick a winner at random on Friday June 14th.

The prize was provided by USA Network, but USA Network is not a sponsor, administrator, or involved in any other way with this giveaway. Contest open to US residents only.