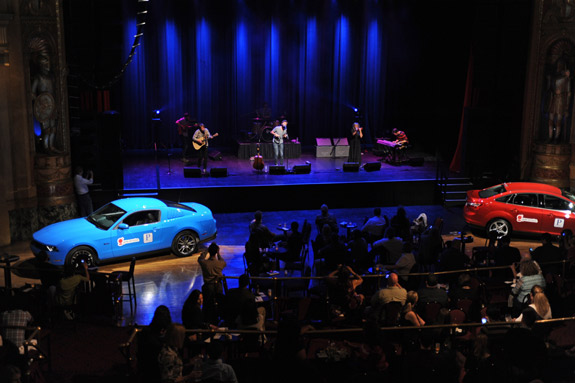 On the second night of Forward With Ford, we went downtown to The Fillmore, where Ford had setup a special concert event for us. I was cautiously optimistic, as I had never heard of The Head and the Heart, the band performing that night.

Google said they were folk-indie-pop-rock. Stylistically, think a folksy Beatles or Crosby Stills Nash & Young with more instrumental force. Catchy piano melodies stand side by side with a tight trio of harmonies, and solid minimalist drums, groovin bass, and plenty of hand percussion and foot stomps make the live show inspiring and really goddamn fun.

I listened to the two tracks on their website beforehand and wasn’t impressed. But I’m here to tell you that those tracks don’t do them justice, because in person they’re amazing!

Some bands are just better live, and The Head and the Heart is definitely one of those bands! I wasn’t able to record their session that night, but I found a great video on YouTube from a live session in the KEXP studios last year:

Everyone had a great time, and I’ll definitely go see them in concert the next time they come through town!

Related Topics:The Head and the Heart
Up Next