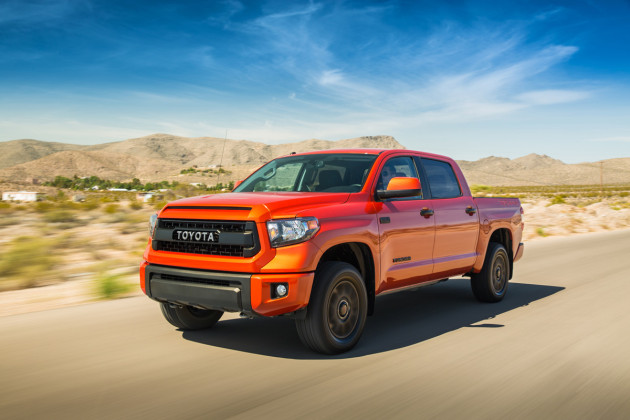 In the arena of full-sized, half-ton pickup trucks with extreme off-road capability, the go-to option has been the Ford Raptor and now the Ram Rebel. Those capable off-road trucks, though, have a serious contender in the Toyota Tundra TRD Pro. We spent a week in this truck and loved it. We drove it on highways, freeways, and then on back roads, dirt roads, and finally where there were no roads at all. And in every situation, the Tundra TRD Pro was ready for the job.

To start, our press loaner for the Tundra TRD Pro was in the best color there is for this truck: Inferno Orange. From there, it just got better. The double cab configuration has a much larger back seat than expected (we hauled adults in it), but leaves the length of the truck short enough to still have good climbing characteristics and ground clearance between the axles. This is an often-overlooked but very important part of off-roading. If the wheelbase is too long, the clearance between wheels lowers in relation to that length since no surface you’re likely to be driving on, off pavement, is going to be perfectly flat. 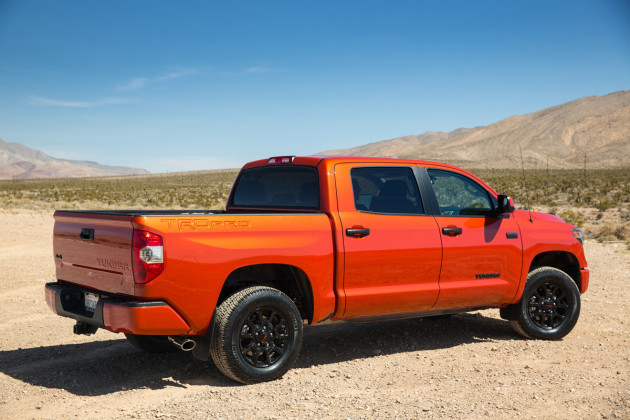 For a power plant, the Toyota Tundra TRD Pro utilizes the 5.7L V8 that is popular in the Tundra lineup. This engine outputs 381HP, 401 pound-feet of torque, and runs through a six-speed automatic transmission. Four-wheel drive is, obviously, standard, as is a towing package (capacity is around 10,000 pounds) and the EPA rates the Tundra 4×4 at 15 mpg combined.

What is not shown in those numbers are the exhaust changes that come with the new 2015 Tundra and that are accentuated in the TRD Pro package. These make it a bit speedier, with 0-60 mph times in the 7-second range, but also much more engaging to drive. Pressing the throttle makes the Tundra TRD Pro sound like a muscle car as it downshifts, accelerates, and rumbles loudly down the road. The exhaust makes a little more vibration under this scenario as well, giving a powerful feeling to the truck’s occupants. 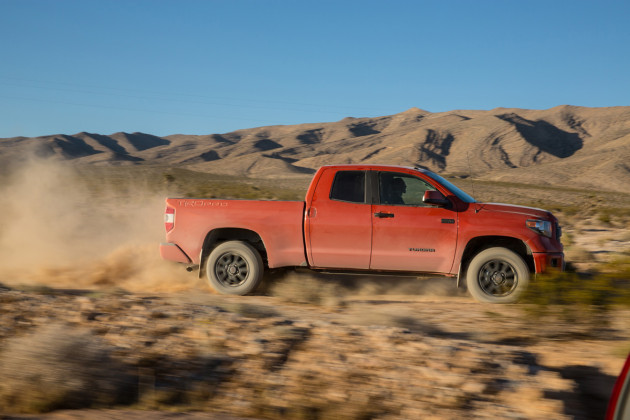 Off the road, though, is where the Tundra TRD Pro is happiest. We were a little surprised at how astute this truck is, despite its bulk, when off the pavement. It climbs, crawls, digs, and fords very well. We were more impressed with the little Tacoma TRD Pro, but it has inherent advantages off pavement, like its thinner track width, smaller size, and better wheel articulation. All things that the Tundra cannot have because it’s a full-sized truck and must retain the capabilities of a full-sized truck. Still, it’s very well-made for off-roading and I found little it couldn’t do. Add in those full-sized truck capabilities and you can see the kind of appeal the Tundra TRD Pro has.

The Toyota Tundra TRD Pro is a great truck and one of the best packages for this pickup we’ve seen so far. The off-road capability is touts is not for show, it’s there and in spades. This truck is a great option for the pavement optional enthusiast. 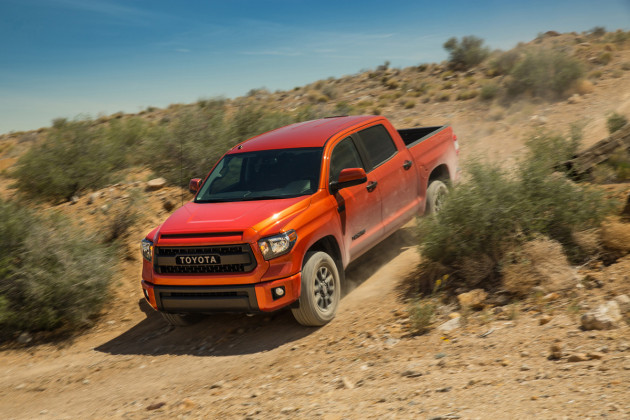