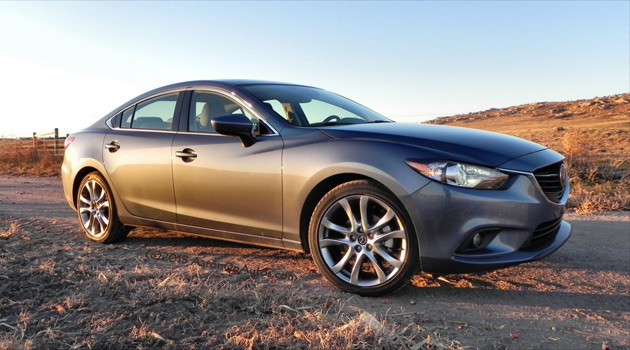 The 2014 Mazda6 is a complete overhaul of this popular, if nichey, midsize sedan. As the carmaker’s flagship model, though, it is a showcase of both their commitment to the Zoom Zoom philosophy and a display of the new SKYACTIV technology suite. The 2014 Mazda6 is beautifully designed, a joy to drive, and in our iGrand Touring test model, extremely fuel efficient.

The base price for the 2014 Mazda6 is in the $22,000 range, but for the top-fit Mazda6 iGrand Touring package we drove, the MSRP starts at a more robust $29,695. That may seem steep until you realize what is included with that. Not just a lot of bells and whistles for interior technology and refinement, which it has, but also the i-ELOOP mild hybrid technology. Hence the “i” in the iGrand Touring.

That mild hybrid option boosts the highway mileage of this car up to an astounding 40 mpg. Without going fully hybrid with the Ford Fusion or Toyota Camry, you won’t get that kind of mileage out of any other midsize sedan. Even without i-ELOOP, though, the Mazda6 still achieves 38 mpg. Add to that the fact that the 2.5-liter four-cylinder SKYATIV high-compression engine outputs some amazing numbers  184 horses and 185 lb-ft of torque  and you can understand that this is not just a boring, fuel efficient sedan. It’s also powerful. 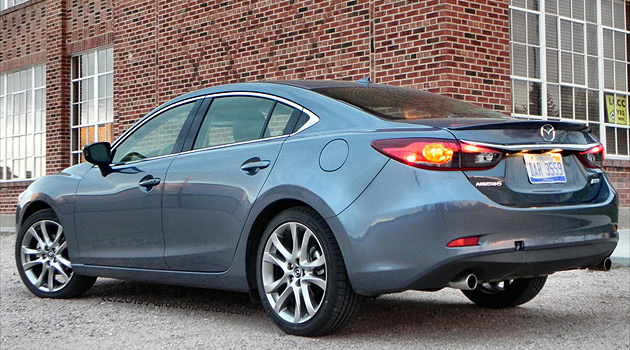 The exterior design for the new Mazda6 is breathtaking. On the market, only the Ford Fusion really rivals it for looks. The swoop of the hood melds with the arching roof while underneath, an upward-tapering cut accentuates the car’s rolling design. It’s a great look for sure.

Inside, the car is very comfortable, with plenty of room for five, easy-access infant safety seat restraint points, and a huge trunk commensurate with what’s expected in this market. The 2014 Mazda6 is roomy, well-appointed, and nicely laid out inside. The iGrand Touring package includes amenities like heated seats, a 5.8-inch touch screen with navigation, full phone connectivity, and those beautiful 19-inch alloy wheels you can see in our photos here.

With Mazda, of course, how the car looks is one thing, but real Mazda fans know it’s all about the drive. The 2014 Mazda6 is amazingly astute on the road. The engine puts out far more power than expected and does not rattle like a tin box doing it. The six-speed automatic transmission (standard in most trims) is very well-tuned with a good shift feel. Overall, the car achieves a sub-8-second 0-60 mph time. Almost unheard of in the midsize market without going to a six-cylinder engine or “sport” model. 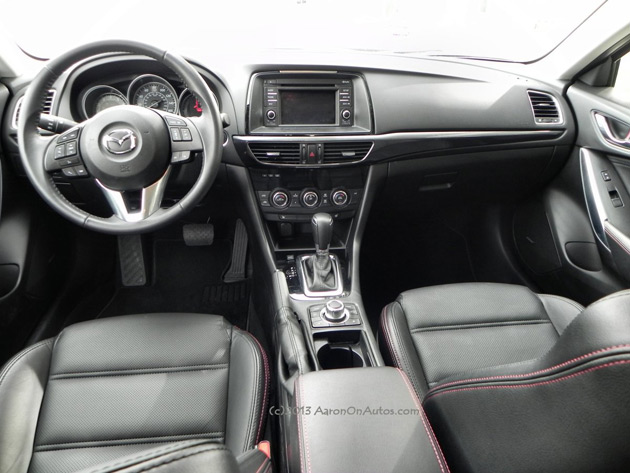 Driving dynamics are great in the new 6. The shifting in normal conditions is very smooth  so much so that you hardly notice it’s happening. Yet when you press for more, the transmission and engine don’t hesitate to deliver more and get the car moving.

Handling is excellent, thanks to the SKYACTIV system of building a car. The frame, bodywork, suspension, steering, and roll cage are all working together to provide a solid, responsive, well-tuned experience that maximizes safety while making even the most fussy driver happy with the road feel. It’s rare to drive a car that has it all together like this and even more unusual that it’s in a midsize, non-luxury sedan.

We’re looking forward to driving the diesel version when it arrives early next year. That may be the only thing that could seriously rival the elegant, powerful package that Mazda has put into this new 2014 Mazda6.

Related Topics:2014 Mazda6Mazda
Up Next

Infiniti To Reveal Formula One Inspired Concept at Detroit Show