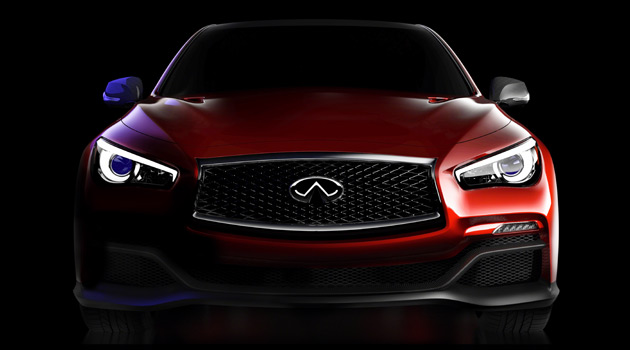 Infiniti will be revealing a Formula One inspired concept car based on the Q50 premium sports sedan at the North American International Auto Show in Detroit next month.

The concept car represents Infiniti’s design vision of a high performance variant of Q50. Called Q50 Eau Rouge, the car is named after the world-famous corner at the Formula One track in Spa-Francorchamps, a corner which requires extraordinary strength, courage and commitment; it has seen some of the most incredible driving feats in Formula One history. For Infiniti, the Q50 Eau Rouge concept blends road car technology and a thoroughbred motorsport vision.

“Performance is a key pillar of Infiniti’s DNA, and this car expresses a deepened design interpretation of that. The Q50, with an abundance of technologies, provides a great basis for an extreme performance version, embodied in the design of Q50 Eau Rouge,” said Alfonso Albaisa, Infiniti’s Executive Design Director.

I’m a huge fan of the Q50, so I can’t wait to see what Infiniti does with the Q50 Eau Rouge. Will this car be competition for the M3/M4? We’ll find out next month!