Infiniti has introduced two all-new luxury crossover sport utilities to the market for 2022. The QX55 is based on the QX50 small crossover, but it adds a coupe style to the look and re-tunes the engine and transmission for a more responsive feel to go with the sportier exterior. The QX60 is a new generation of the midsized three-row with nicer looks, an improved engine, and a stronger transmission. 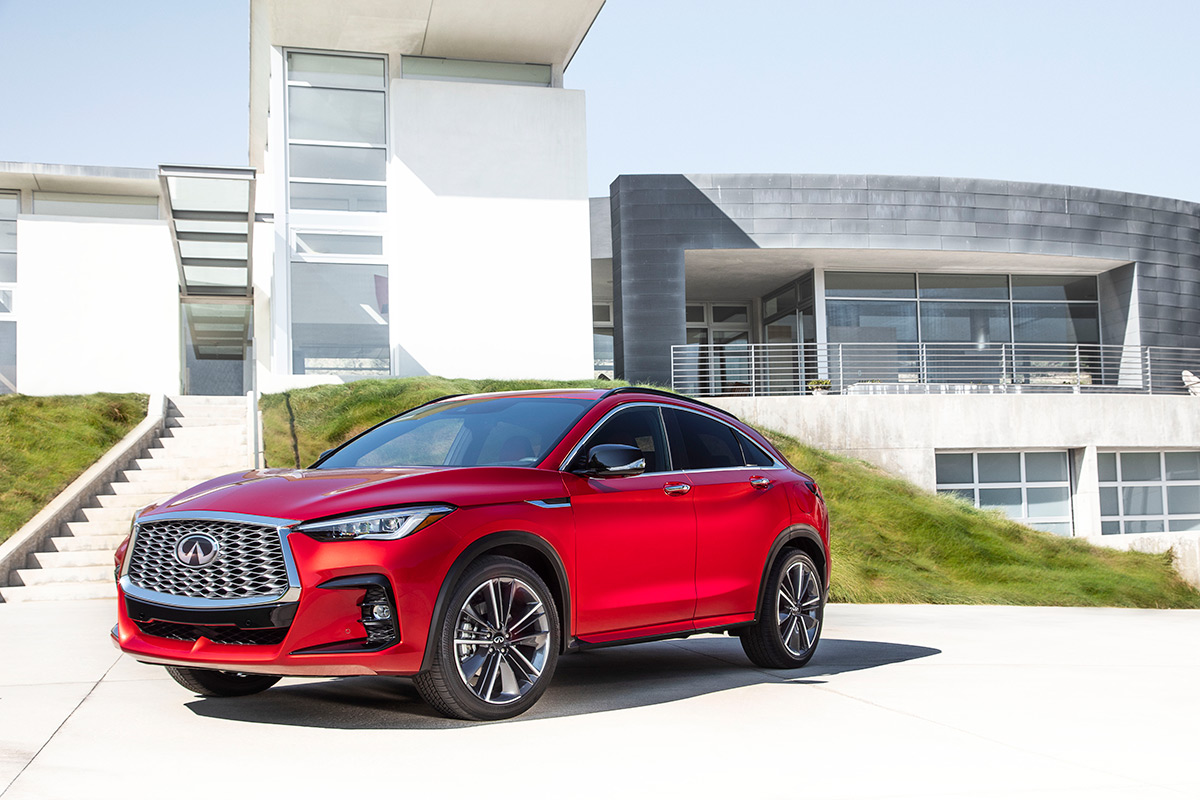 Let’s start with the 2022 Infiniti QX55. This is basically a restyled QX50, but with some sport additions to go with the faster-paced body styling of the crossover. The QX55 rides smoothly, has a lot of high-end features as standard, and more cargo space than most of its coupe-like competition. The QX55 sees the Audi Q5 Sportback, BMW X4, and Mercedes-Benz GLC Coupe as direct competition and is probably strongest against the Audi and BMW while being a lot cheaper than the Mercedes.

The QX55 uses the same turbocharged 2.0-liter four-cylinder engine found in the QX50, but with some revisions. The automatic cylinder compression ratio capability is retained but has been refined with engine tuning and control changes to make it less quirky and more power-oriented in the QX55. To go with those engine refinements, the Infiniti QX55 also sees its continuously variable transmission (CVT) reprogrammed for quicker responses to throttle changes. This results in a much more sport-oriented and less jerky feel than what’s found in the QX50. 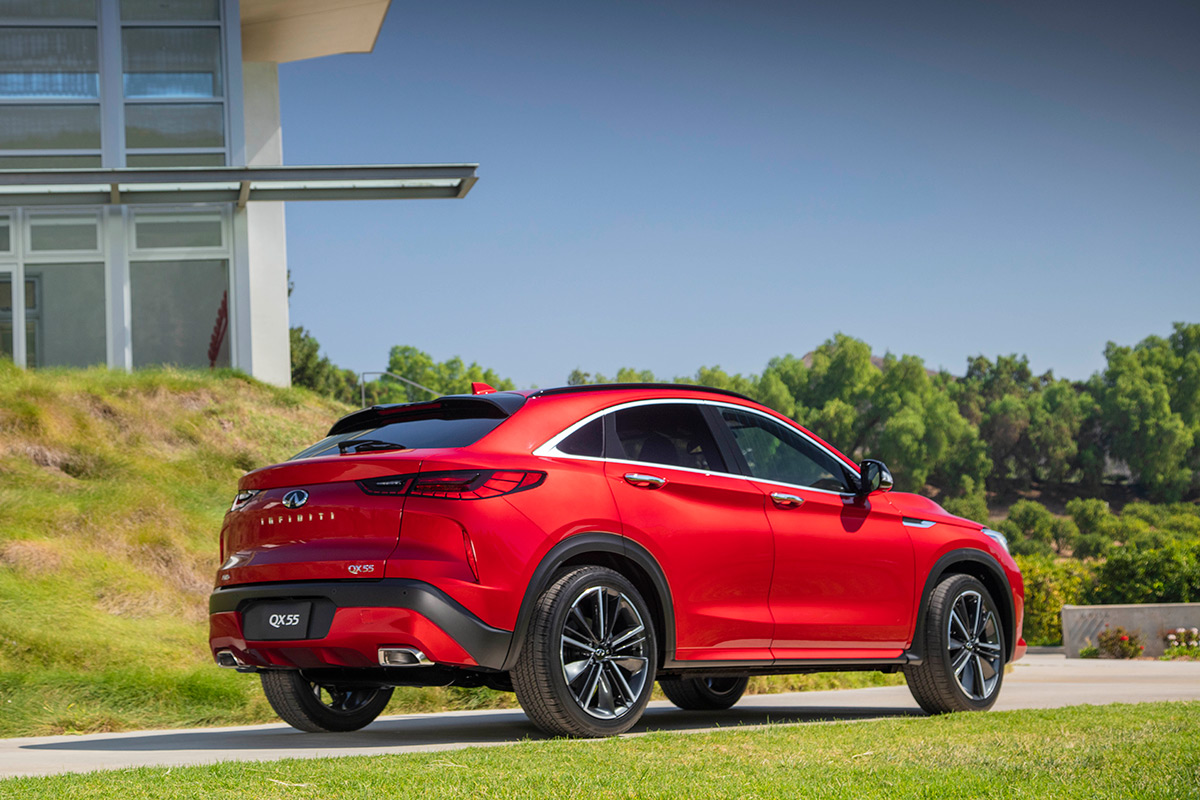 Inside, the QX55 is very much like the QX50, with a comfortable and well-done interior that features plenty of upscale materials and smart appointments. There is an exclusive Monaco Red interior for the QX55 that has beautiful red upholstery and stitching throughout the cabin.

Front seating in the 2022 QX55 is comfortable for both short and long trips. It’s adjustable and accommodating in legroom, headroom, and shoulder room. In the back, however, the sloped roofline means a lot less headroom so that those over six feet are likely to feel cramped. Legroom is good, however, and seating for two is comfortable. Three however is a squeeze. 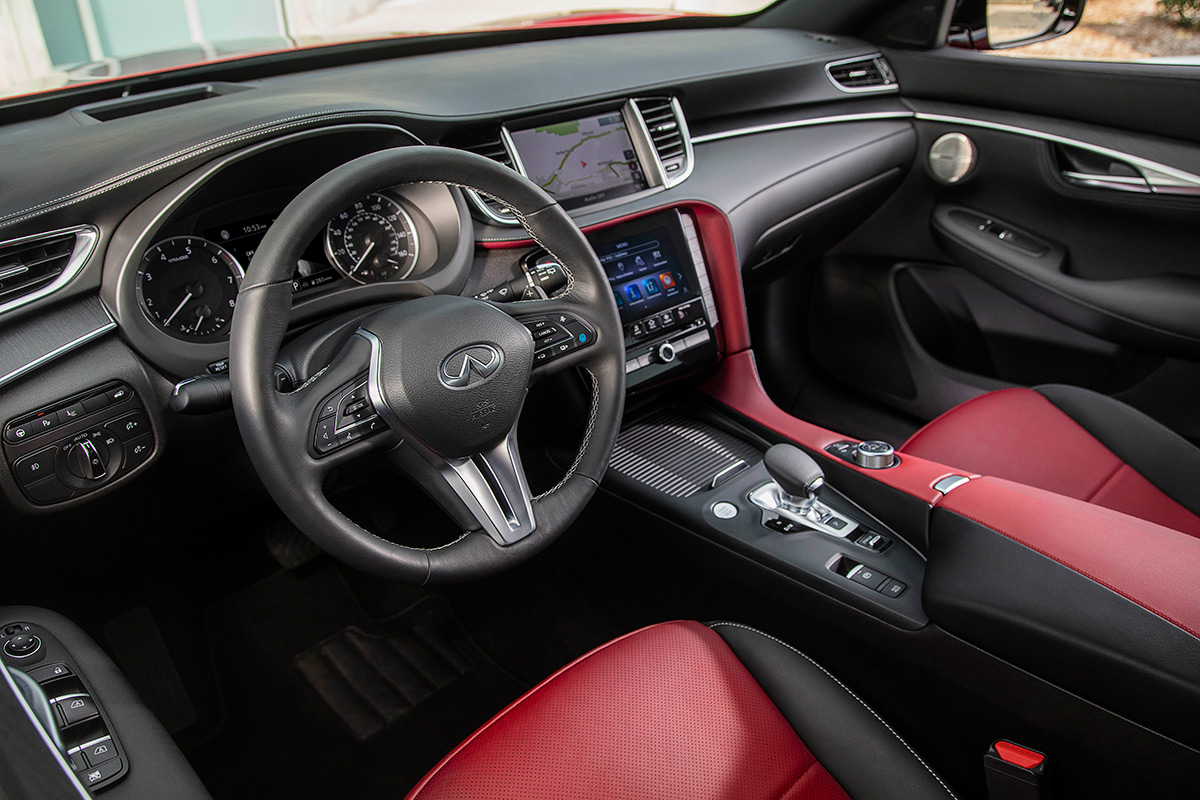 Cargo space behind the second row is plentiful compared to others in this segment. The rear seats, however, do not fold flat and while they do slide forward to add more room, that creates a big crevasse between the rear loading deck and the seats. A canyon that almost everything you don’t want to fall in will fall into.

Drive quality in the 2022 Infiniti QX50 is really good, with good engagement and a dynamic feel. This crossover isn’t necessarily quicker than others in the segment or even its own QX50 sibling, but it definitely feels more astute by comparison. Whoever you are, you’ll enjoy the way the QX55 appeals to your driving senses. 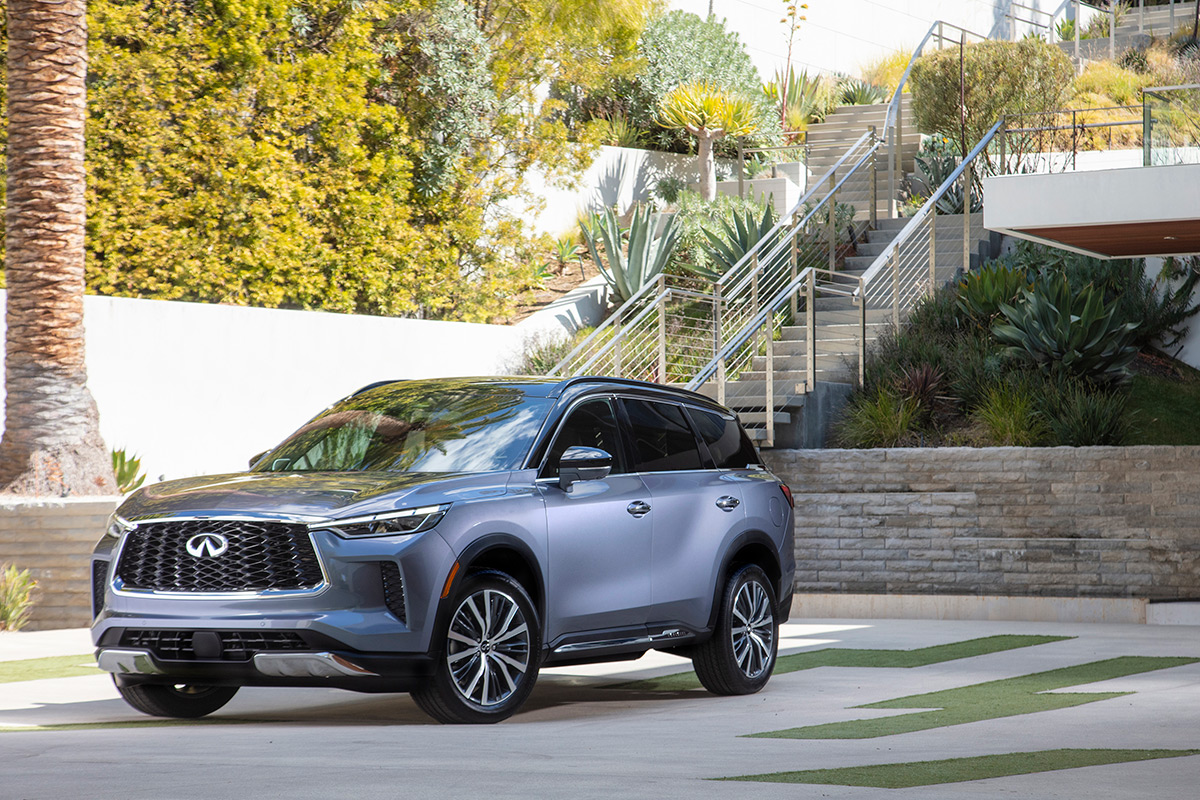 The larger QX60 was completely revamped this year with several changes for the better. After the crossover took 2021 off to reconsider, the 2022 Infiniti QX60 debuts as a beautifully designed vehicle. As the second-generation for the QX60 midsized crossover, the only thing in common with the previous-gen, other than general size, is the engine. The 3.5-liter V6 puts out 295 horsepower and was never a slouch, so it was worth keeping. What changed, though, is the dropping of the CVT in the previous QX60 in favor of a much more astute nine-speed automatic transmission. Adding gears to the QX60 greatly improves the drive appeal and capability of this crossover and reduces the inherent reliability problems that a vehicle this large inevitably has with a CVT.

Most competitive with the QX60 are vehicles like the Acura MDX, Audi Q7, and Genesis GV80. The more expensive options from BMW and Mercedes-Benz are luxury jumps ahead by comparison. That isn’t to say the QX60 isn’t a luxurious crossover, just that it’s not at the same level and is priced accordingly. 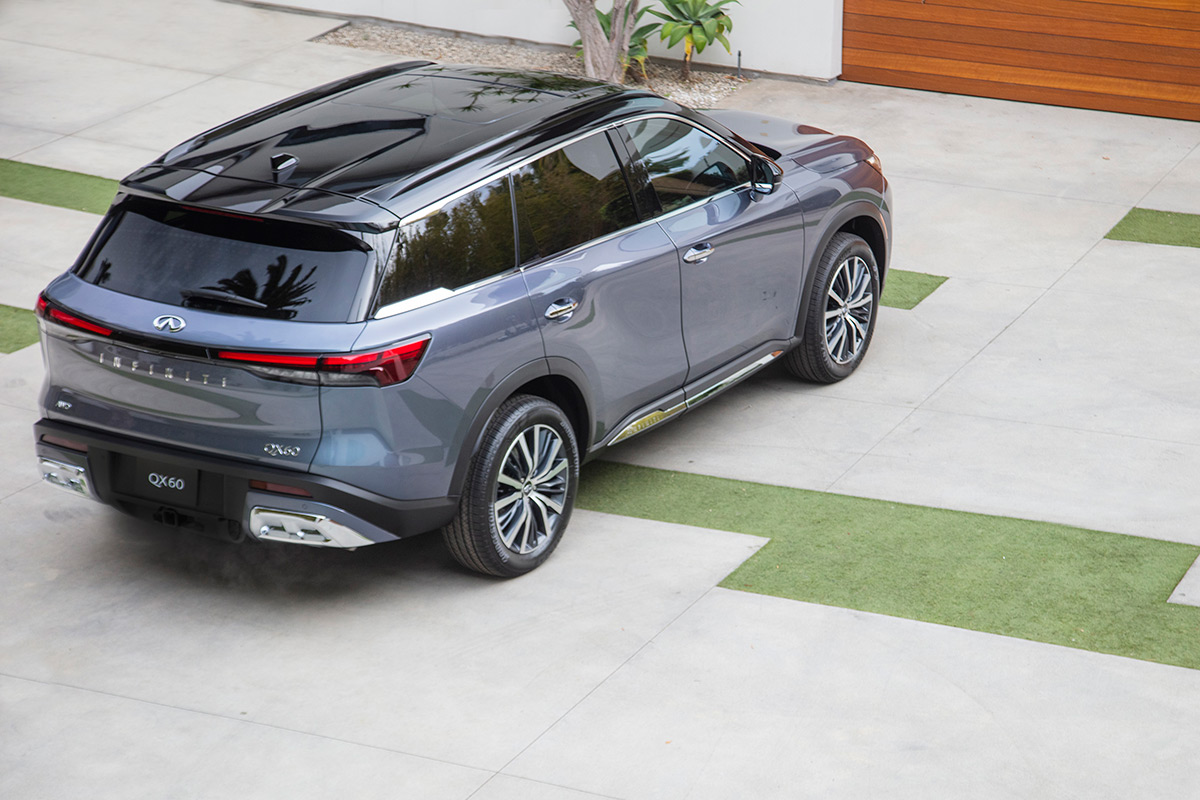 What the 2022 Infiniti QX60 does have is a bevy of high-tech driver’s aids, safety systems, and features. A 12.3-inch touchscreen is standard for infotainment, and it has wireless Apple CarPlay and wired Android Auto included. There’s also tri-zone climate control, forward collision mitigation, and rear automatic braking as standard features.

Upgrading to the Luxe trim also adds Infiniti’s ProPilot Assist system with several systems that combine to make for near self-driving. You can also add seat massage, a 17-speaker Bose sound system, a digital gauge cluster, a head-up display, and wireless device charging. 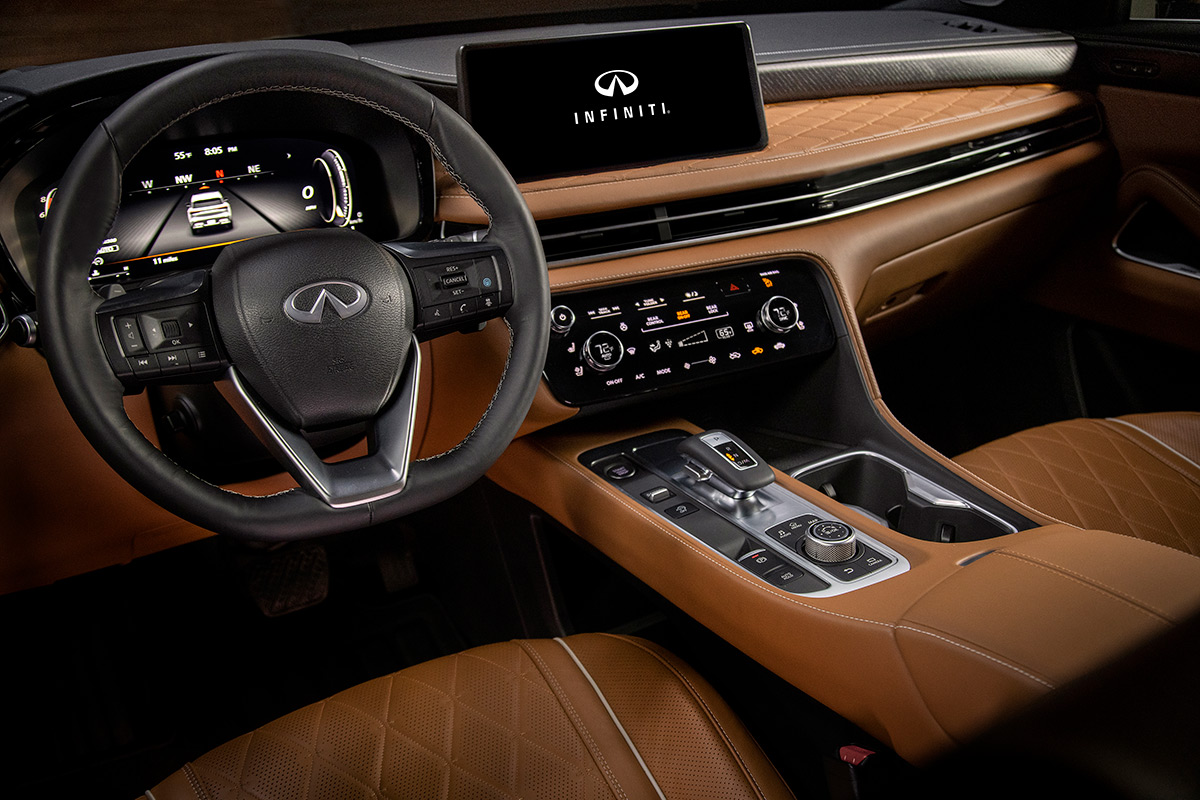 Another great feature of the 2022 QX60 is its towing and cargo capabilities. Cargo space is plentiful with a lot of floor area, tie-down points, and rear seats that nearly fold flat. Towing is rated at up to 6,000 pounds and works well thanks to the new geared transmission.

Both the QX55 and QX60 are well-done vehicles from Infiniti that are competitive in their luxury markets. We enjoyed the ride quality and driving engagement that the Infiniti QX55 offers and like the daily drive comfort and well-appointed design of the QX60.