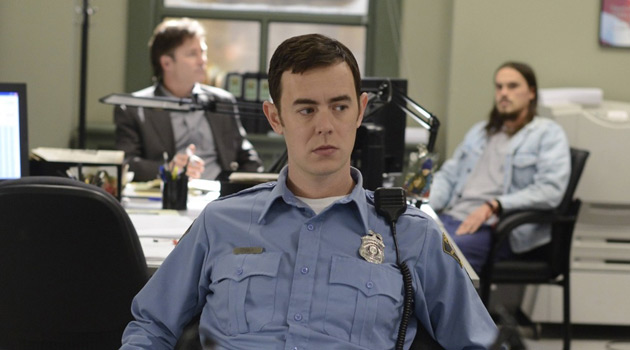 I recently had the chance to sit down and talk with Colin Hanks about his role on FX’s Fargo, which is easily one the year’s best new hour-long series, a terrific mix of crime drama and dark comedy. And it’s filled with a terrific cast of character actors, including Colin Hanks, who plays Gus Grimly.

Hey Colin. First of all, did you ever talk to anybody about why they gave your Fargo character such a cartoonish kind of name? You sound like a Scooby-Doo villain or something with “Gus Grimly”.

I never brought it up. I just dig the name. I think it’s such a great name. I feel like that’s maybe not Scooby-Doo. I think it’s like the cool guitarist in like a 60s surfer band, “Gus Grimly and the Grimtones” or something like that and I kind of dig that.

I was wondering if you’d tell us anything about working in the cold up there in Calgary and how that had any effect on your performance or working conditions.

It has effect on every single aspect of life. The cold—look, snow and cold temperatures, that’s a character within the Fargo universe and you have to have that, and it is a joke, but it really does affect every facet of your life when you’re living up there. I love Calgary. It’s a great city. I enjoyed my time there quite a bit.

Shooting and filming in that cold could be very difficult at times. When you’re shooting nights and it’s 3 in the morning and it’s minus 35 degrees, that’s hard. That’s hard to work in. The conditions are difficult for everybody, not just the actors but for the camera crew who wrap the camera in an electric blanket and the teamsters who have got to get these big trucks in and out of essentially snow fields.

So, it definitely becomes trying, but in terms of performance, look, it’s all part of the show. Again, it’s part of the universe. The irony is sometimes you have to play like it’s a little bit warmer. I know it’s cold, but remember, on the show maybe it’s not that cold, so maybe lower your shoulders a little bit, but it’s kind of hard when you can’t feel your face. So, you just try and do the best you can and you make sure that you become really good friends with wardrobe and they give you all sorts of hand warmers and body warmers and things like that.

How much input did you have in your character, or was it mostly relied on the writing and Noah’s kind of direction?

Well, really to be quite honest, I had a conversation with Noah very early on before we started filming, a few months before we started filming, just about sort of what the show was going to be like, not plot points or anything like that but just sort of the idea that this is going to be a miniseries with a beginning, middle and an end and here’s what we’re going to do and “Gus” is a very well-meaning guy that’s out of his elements and is not necessarily a cop to be a cop and save lives but to be a cop as sort of a form of community service, and that was really sort of all that I had to go on until I would read the scripts, and then, I would really just go off of whatever Noah had written, and oftentimes, you find out stuff down the line about why “Gus” is the way that “Gus” is or you get these kernels of his back story later on. I have no problem with that.

After my experience on Dexter, in which I spent pretty much an entire season thinking I was actually talking to—thinking my character was talking to a real human being to only find out that it was a figment of his imagination, I now realize all I need to know is what the scenes are and what is talked about in the scenes and everything else sort of magically comes together within the magic of television or movies. So for me, I would just try and play the beats and play emotions and things like that and connect that way. I don’t necessarily—I didn’t necessarily know a lot about his back story or his history but I just knew enough and knew what his goal was that sort of righting the wrong of letting “Malvo” go, that was really sort of all I needed and then everything else I found was pretty much on the page.

So, setting aside Fargo, what would you say is your favorite project that you’ve worked on over the years that didn’t get the love that you thought it deserved?

That’s a tough question. Nowadays, everything seems to live forever. When I started out, a lot of things had a relatively short shelf life. You’d be on a television show, it would be on that night and then maybe you’d never see it again, and now, you can pretty much find everything. There’s a way to pretty much find it all, but I don’t really know. I’ve sort of—I’m always pleasantly surprised by the amount of attention that Orange County gets. I’m always very proud when people say they’ve seen The Great Buck Howard because that was a movie that I was very proud of, but overall, I try not to think about that too much. I really just try and focus on what the next thing is.

While you do seem to play a lot of clean-cut characters, I mean even on Dexter when you were this homicidal character, you were very clean cut, do you ever wish you’d get a character where you can grow your hair and get a scruffy beard and get down and dirty?

If you know of someone with that role, will you give them my name and my headshot? Yes, oh gosh, yes. For me, sort of along the lines of comedy or drama, I always want to try and do different things, and I’ve had an opportunity to do it a couple of times and I’m always looking for a chance to do something different and always trying to—I don’t necessarily want to repeat myself at any time, and I don’t want to just do the same version, the same guy over and over and over again. I want to be able to do different things and to evolve and constantly trying to find those roles, but also at the same time, trying to find characters that on the surface may seem like that but have things underneath that maybe come to light that are revealed later on, and I’m constantly trying to find different things, different angles, but yes, there is a part of me that is desperately wanting to not necessarily be this cute, endearing, heart on his sleeve type character that just wants to be liked because that’s a part of me but not all of me, so to speak.

—
A huge thanks to Colin Hanks for taking time out of his busy schedule to talk with me. If you haven’t checked out Fargo yet, be sure to check it out. Fargo airs every Tuesday night at 10pm on FX.

Check out this clip from tonight’s all-new episode: