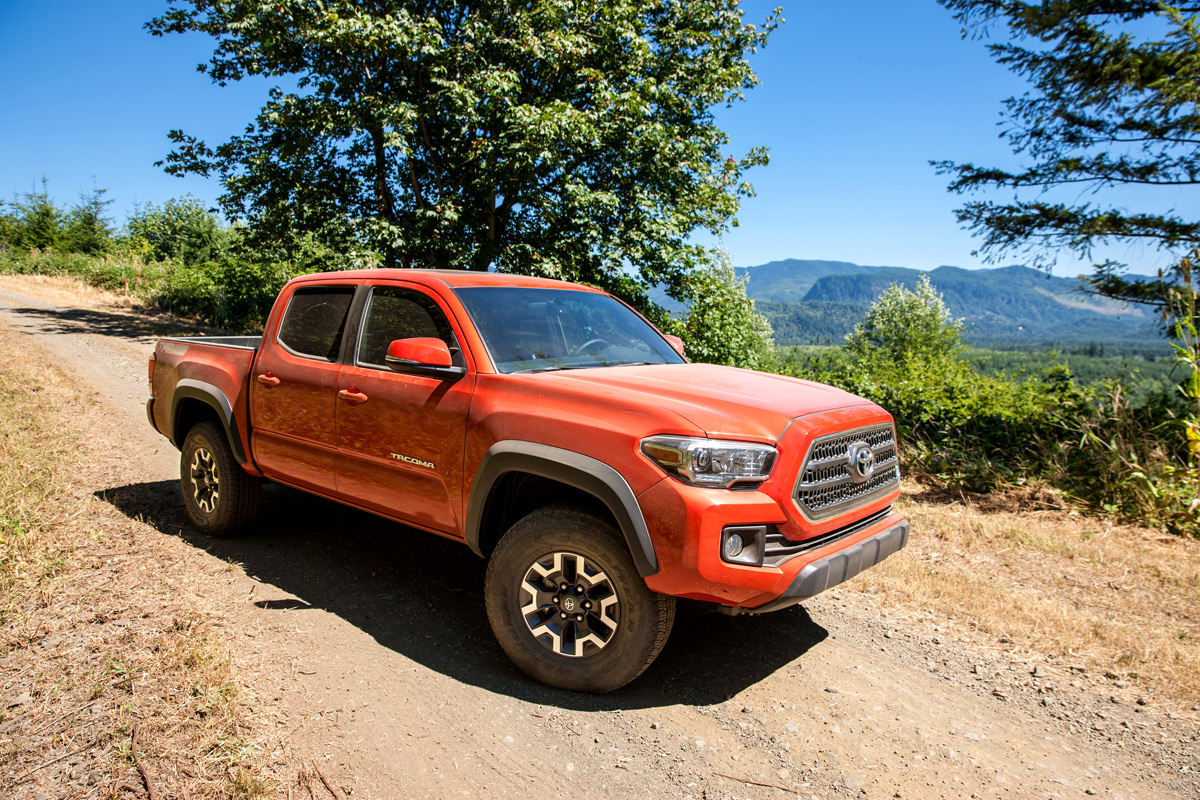 The Toyota Tacoma was totally redesigned for 2016, and the new Tacoma in its TRD Off-Road package is pretty dang awesome. This is a smaller pickup truck with a huge amount of terrain-gobbling goodness, but striking a balance between everyday usefulness and weekend getaway capability. We spent a week in the 2016 Tacoma TRD Off-Road and loved every minute of it.

For this new Tacoma, Toyota took the best of the previous-generation and enhanced it. The 4-cylinder base engine remains, but a new, better V6 is now the upgrade engine and a lot of off-road goodies from the Toyota 4Runner and legendary Land Cruiser are now available in the Tacoma’s TRD packages (TRD Sport, TRD Off-Road, and TRD Pro). An upgrade to the transmission, a redesigned transfer case for the 4×4, and a beefier rear axle also improve this new Taco truck.

The Toyota Racing Development (TRD) options for the Tacoma start with the TRD Sport. This takes the base model SR and SR5 trims and adds a few goodies like LED daytime running lights and a hood scoop. Alloy wheels, sport-tuned shocks, and a few convenience goodies like a 120-volt outlet in the bed and wireless phone charging are also added. Both the four-cylinder and six-cylinder engines are available in this trim package, as are rear-wheel and four-wheel drive. 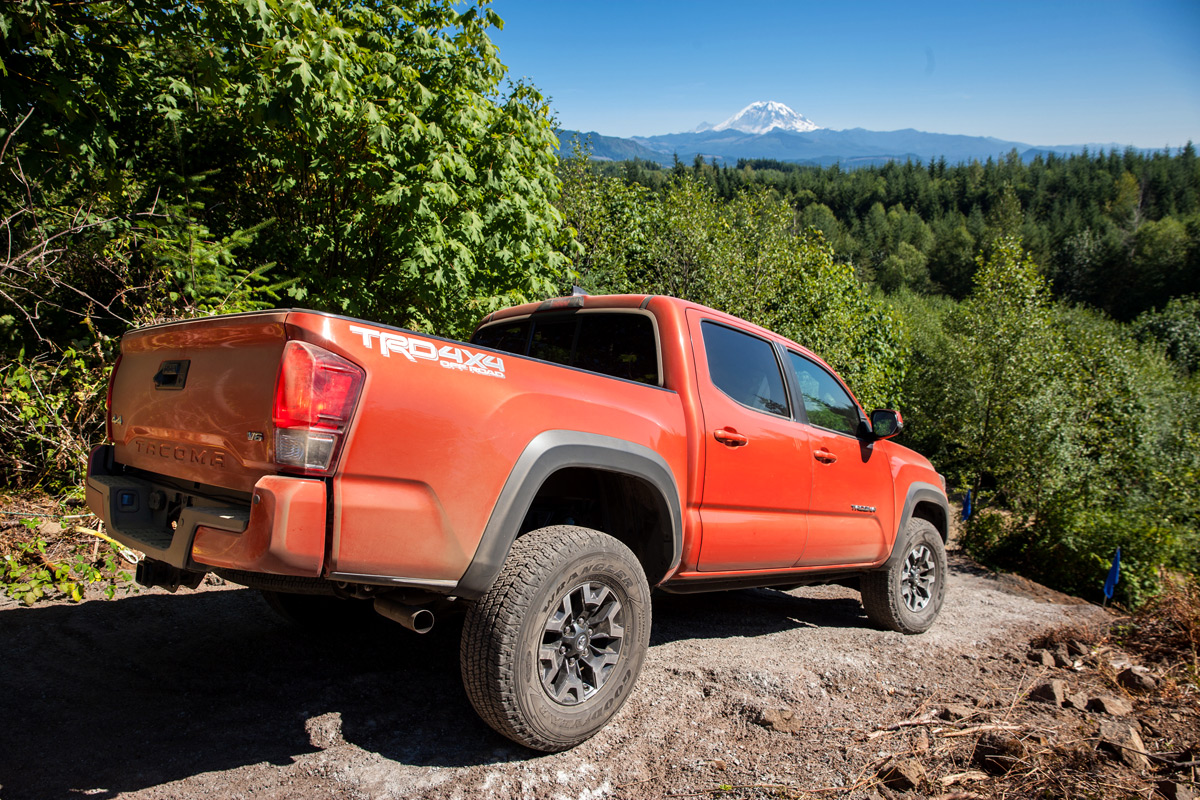 We drove the next in line in the trim lineup, the TRD Off-Road, which nixes that hood scoop and instead goes with rugged body trim elements, trim-specific alloy wheels, Bilstein shocks, a better front approach angle, an electronic locking rear differential, and Craw Control (assuming the automatic transmission is chosen). This gives a lot of off-pavement readiness to the truck, especially with the V6 and four-wheel drive.

Our test model was powered by the new V6 engine, which is new this year. This new power plant puts out 278 horsepower and 265 pound-feet of torque. A six-speed manual transmission is standard, but we had the six-speed automatic on ours. This 4×4 with the automatic is EPA-rated at 20 mpg combined, with 18 mpg in the city and 23 mpg on the highway. We saw closer to 18 mpg overall, though, during our week of mixed driving that was heavy on the off-road component. Towing is rated at 6,400 pounds.

On the inside, the new 2016 Tacoma gets a serious facelift with a dashboard that looks very much like the new RAV4, but without the wavy European line across the bottom. Wonderfully useful round vents, the “Dracula fang” steering wheel, and bezels encapsulating everything all give the Tacoma a unique look. In the Off-Road model, leatherette seating is offered and extra off-pavement controls are found next to the push-button start and the shifter. The integrated GoPro mount on the windshield (standard in all 2016 Tacoma models) and ample drink holders finish the cabin. 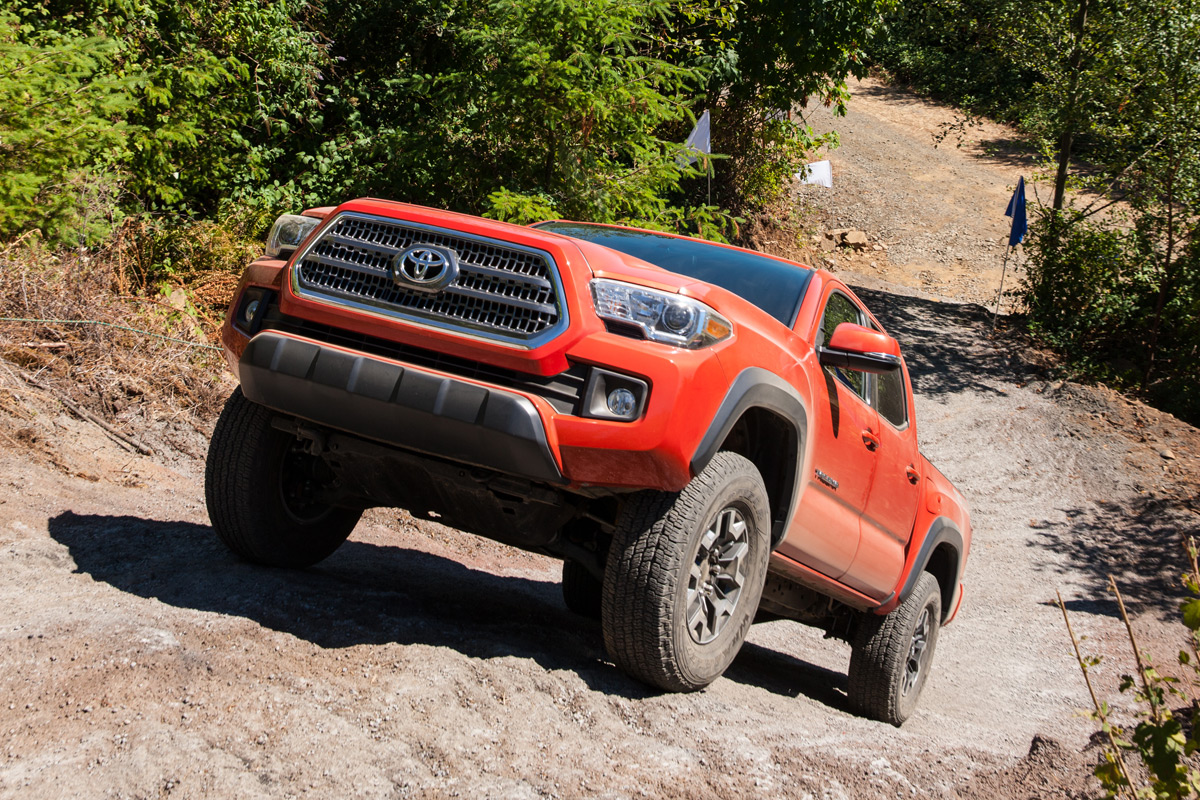 We like the seating and its comfort level, though some taller folks might find the stretch from the seat to the pedals and the lack of matching movement for the steering wheel to be a bit awkward. At 6’3″, I found myself with my seat all the way back to accommodate my legs and having to lean forward to drive because the steering wheel only telescopes back about an inch.

On the road, the 2016 Tacoma Off-Road drives in much the same way the truck always has. It’s truckish in its handling, a bit loud, but far more sophisticated overall than the Tacoma has been before. Off the road, the TRD Off-Road 4×4 package offers a good amount of capability for most needs. It’ll get you through the dirt and over the dry riverbed to the campsite or fishing hole you want. But for serious off-pavement excellence, you’ll probably want to upgrade to the spendier TRD Pro package with its KDSS swaybar and more robust shocks.

As a good everyday truck that can get you into the wilderness on the weekends, though, the 2016 Toyota Tacoma TRD Off-Road is a great choice. You can find one on the lot for about $36,000 or so. 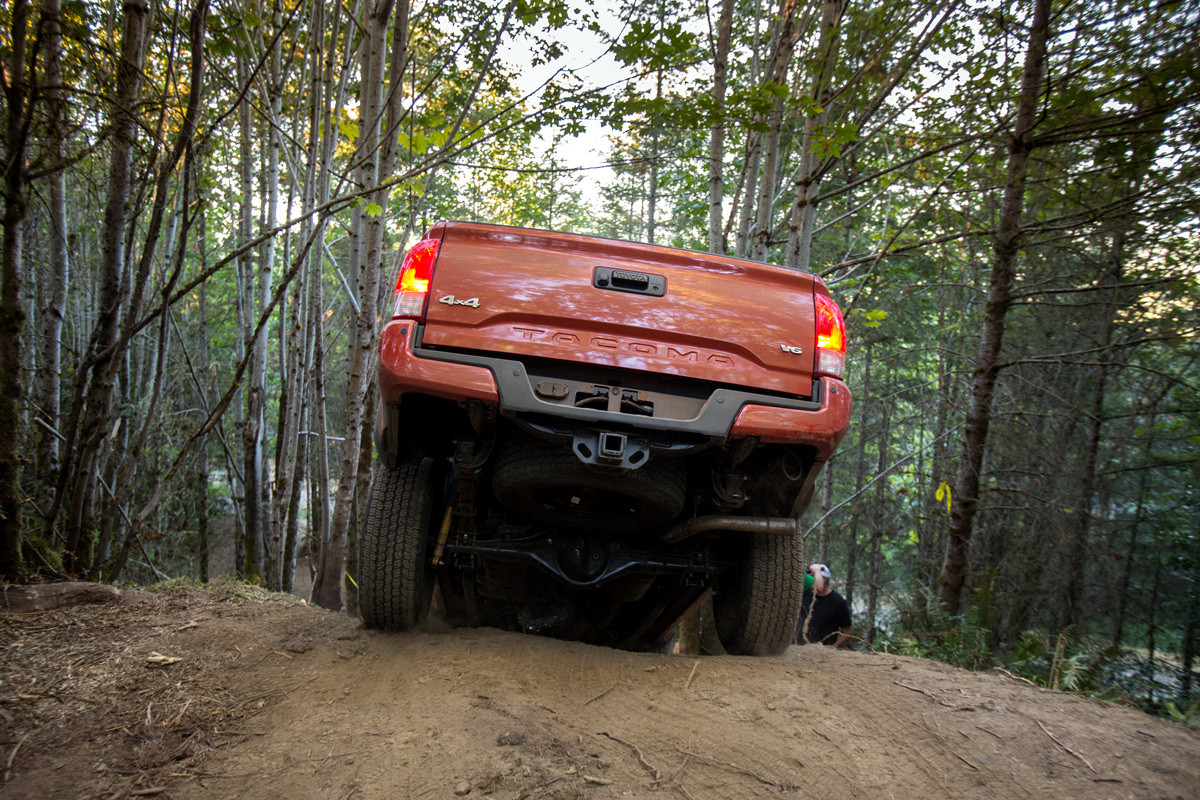 2018 Ford F-150 Sports A Sleek New Look, Along With Some New Engine Choices