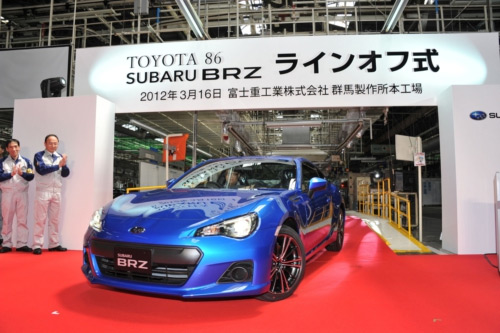 Fuji Heavy Industries Ltd. (FHI), the manufacturer of Subaru automobiles, announced that it held a line-off ceremony at Subaru’s Gunma Main Plant with Toyota Motor Corporation (TMC) President Akio Toyoda and honored guests in attendance, in commemoration of the production start of the Subaru BRZ and Toyota 86.

FHI and TMC first agreed on business collaboration in October 2005. After the companies expanded their cooperative ties with new agreements related to development and production in April 2008, they then began four years of development. The completion of this joint-development product also marks a great achievement of the alliance between FHI and TMC.

At the ceremony, TMC President Akio Toyoda said, “I would like to express my sincere appreciation to the ceaseless efforts of all FHI people and staff who were involved in the development, production and preparations for both models. The Subaru BRZ and Toyota 86 would not have been successfully developed without collaboration between FHI and TMC. We started the alliance for mutual growth in 2005 and now I’m delighted to see that our alliance surely bore fruit.”

FHI President Yasuyuki Yoshinaga, after extending his gratitude to all participants at the ceremony, said, “The car symbolizes our corporate strategy in two significant aspects: good progress of our alliances; and advancement of our ‘select and focus’ approach. The start of production today made a huge step for us, but it is not our goal. By constantly refining both models, TMC and FHI hope to nourish each model to be loved by customers all over the world for a long time to come.”

Subaru Gunma Main Plant, where minicars were previously manufactured, was recently renewed for the Subaru BRZ and Toyota 86 production. FHI plans to produce the Impreza at the same plant by March 2013.

FHI offers “Enjoyment and Peace of Mind” to its customers through the Subaru brand statement “Confidence in Motion” and its consistent approach to “Engineering Excellence”.

The highly anticipated BRZ goes on sale in the United States in spring 2012.