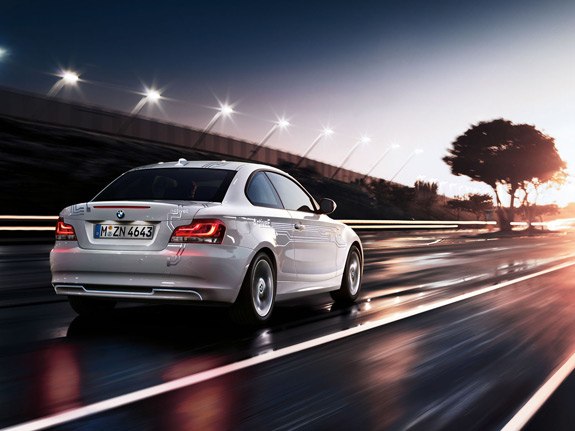 At 2010’s North American Auto Show in Detroit, one concept car in particular caught the eyes and imagination of car geeks around the world: The BMW 1 Series Active E.

The 1 series is the latest attempt by BMW to make a high-quality- yet stylish- and energy efficient all-electric car. The car is a 2-door, 4-seat coupe that runs entirely on battery power. The appeal of the car is not just the aesthetics (it looks like a normal car, rather than a golf cart) but also the use of the latest in electric car technology. The 1 Series features the new Active E drive system, which creates more horsepower and torque. The end results is a smoother, faster, more efficient ride.

Among the most significant changes made was the decision to store the electric motor in the rear of the car. The car also features a new crash structure in the front of the car, an altered transmission tunnel, a new rear-end structure and a brand-new rear-axle assembly.

The motor is powered by three lithium-ion batteries located in the front-end of the car. The batteries are liquid-cooled, which assists in keeping a charge more efficiently in all types of weather. Since the motor and other electronics are located in the rear of the car, the trunk space is significantly less than a gas-powered car of the same size, which is one of the few drawbacks.

A surprising fact is that the car is actually pretty hefty considering its classification as an electric car. The weight is because the car is built with a mostly steel frame, but the 4,100-pound weight also provides the car with a lower center of gravity and the ability to go from 0-60 in about 9 seconds, which exceptional for an electric car. The car has a top speed of 87 miles per hour because of battery conservation worries.

The new 1 series car also has a brand-new feature called EcoPro. It is a button on the dashboard that- when pressed- reduces the power of the air conditioner and changes the throttle mapping, which results in less energy being used by the battery.

The battery will keep a charge for about 100 miles, which is always the down side of electric cars; On the other hand, electric cars are mostly meant for street and city driving, and not for road trips. Most experts say that a buyer should only consider an electric car if they drive less than 100 miles a day.

The 1 Series Active E will be on display during the 2012 Summer Olympics in London. As a major sponsor of the event, BMW will unveil most of its electric and hybrid fleet, which will include the 320d and 520d sedans, 40 miniE’s (which were the basis for the 1 Series) and 160 ! Series Active E’s. The reason for all the green vehicles is due to the fact that the London Organizing Committee of the Olympic Games has enforced carbon-emissions regulations on all vehicles used during the games.

As of right now, the BMW 1 Series Active E is not widely available. BMW rolled-out a test press of 1,100 vehicles (700 in the United States) in January of 2012 at the whopping deal of $499 per month, with a $2,250 down payment. BMW has not stated when they will do a full-scale release of the car, but Automotive Magazine has speculated that the car will go into mass-production in 2013.

David Nance is a freelance writer and avid car enthusiast. While Mr. Nance has not yet decided to “go electric”, he is closely following electric vehicle innovation. To compare cars, Mr. Nance uses numerous online resources.