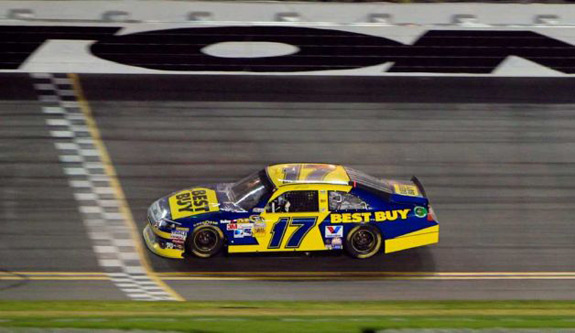 Matt Kenseth managed to edge out Dale Earnhardt Jr. and Greg Biffle for his second Daytona 500 win last night. This year’s race was originally scheduled for Sunday afternoon, but heavy rains caused the race to be postponed for the first time in the race’s history! The Daytona 500 finally got underway on Monday at 7pm EST.

Early on in the race, our driver Regan Smith was leading the pack in 3rd place, and we thought be might be able to pull out the win. Unfortunately, despite the car running well, he fell to the back of the pack, ending the race in 24th place. 🙁

Let me tell you, this Daytona 500 was unlike any other!

The race was barely one lap old when Elliott Sadler turned Jimmie Johnson hard into the outside wall near the exit from the tri-oval. Unable to avoid the wreck, David Ragan plowed into the side of Johnson’s car. Neither Johnson nor Ragan were able to continue. The cars of Trevor Bayne, Danica Patrick and Kurt Busch were severely damaged in the melee, and all three headed to the garage for extensive repairs and later returned to the track.

On Lap 160, Juan Montoya’s No. 42 Chevrolet slid out of control at the entrance to Turn 3 and slammed into a jet dryer, which was against the outside wall, blowing the track. The collision ignited the jet fuel in the dryer and set both vehicles ablaze. Montoya and the driver of the service vehicle both escaped the wreckage, but the race was halted for 2 hours while the track was cleared.

The race resumed just before Midnight, and it was a pretty intense 40 laps. In the last few laps, it looked like Dale Earnhardt Jr. or Greg Biffle might be able to overtake Matt Kenseth for the win, but Kenseth managed to hold them off and take home his second win at Daytona.

We hope Regan Smith has better luck next weekend at Phoenix International Raceway. You can tune in and watch the race on FOX.