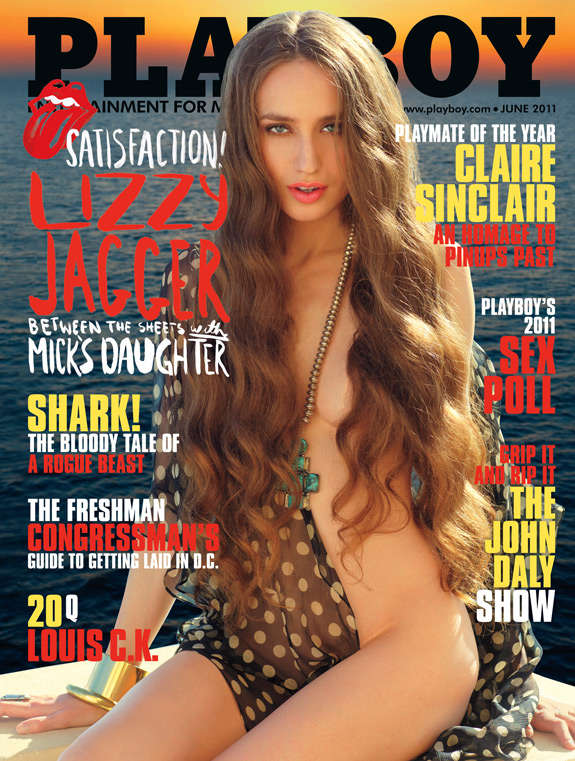 Rock heiress Lizzy Jagger is featured on the cover of Playboy’s June issue and in a 6-page nude pictorial inside the magazine (on newsstands Friday). Additional photos are available at www.playboy.com/jagger. Mick Jagger’s model/actress daughter is following in the footsteps of her mom, supermodel Jerry Hall, who posed for Playboy’s October 1985 issue.

Lizzy not only posed for Playboy, she also sat down with the magazine to discuss her famous lineage and people’s assumptions about her.  Following are selected quotes from the interview:

On her parents’ reaction to her decision to pose for Playboy: “They understood that when you don’t know when you’re going to have kids, it’s nice to have wonderful pictures of your 20-something self.  And at 27, I feel comfortable expressing myself through my body.”

On her parents: “[My dad] is a giggler…Both my parents are mature, sensible people, but they’ve kept their youth about them.”

On learning good manners from her parents: “My father, being English, taught me which forks to use and how to have polite conversation. And my mother, being Texan, taught me the ‘yes sir, no sir,’ kind of thing. They both have very good manners.”

On people’s assumptions about her: “People assume that because I was brought up on Rolling Stones tours and my father is who he is, I’m some kind of rock-and-roll bad girl.  But I do like to have a bit of fun.”

On being comfortable in her own skin: “I’m kind of a topless person…I’m quite European, so when I’m at the beach, I prefer to be topless.”

Should be an interesting issue, can’t wait for mine to arrive in the mail!