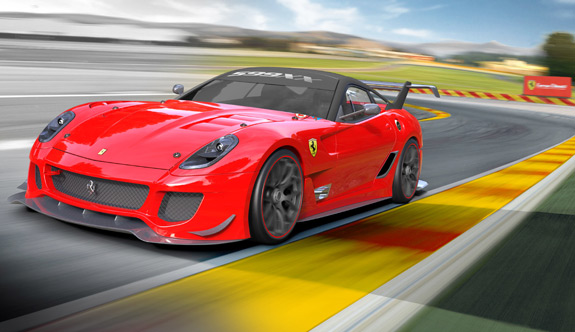 For most people, the Ferrari 599XX is the epitome of automotive nirvana. But if you’re a sick individual wanting even more performance, Ferrari’s got a special edition 599XX just for you!

Meet the Ferrari 599XX Evolution. The Evolution package gives the 6.3L V12 Berlinetta more power and better aero treatment. Output is boosted to 740 HP and 516 lb-ft of torque with the addition of side exhausts. The final gear ratio is also slightly shorter for better acceleration. Helping the engine along is a weight reduction of 77lbs compared to the standard model.

The 599XX Evolution features improved chassis dynamics, thanks to an active aerodynamic package integrated with the vehicles’ electronic control systems and the adoption of new Pirelli tires. The new aero package uses an active rear wing that features two flaps, with profiles similar to those used in Formula 1, which rotate electronically to adjust the downforce between the front and rear axles in function of vehicle speed and the maneuver being effected. Along with a fresh front spliter and rear diffuser, these improvements make for better cornering and downforce.

The 599XX program allows owners to drive their Ferraris on the track at special events and give feedback to the company. Lucky bastards!

Check out the Ferrari 599XX Evolution’s Debut at the 2011 Bologna Motor Show:

The 2021 GMC Yukon Broadens It’s Appeal, With Upscale Denali And Rugged AT4