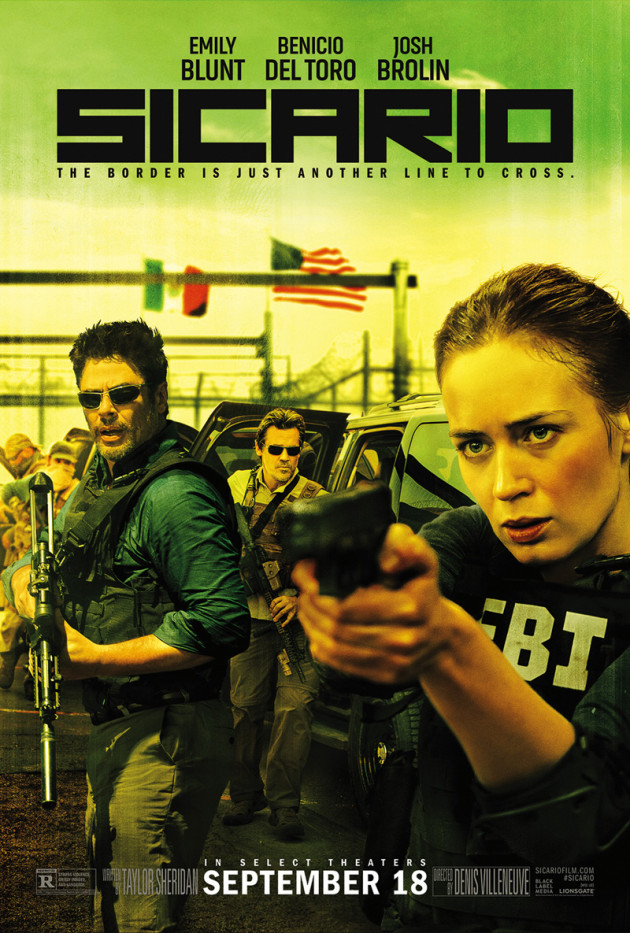 Sicario is not the kind of film to make pretenses about. The movie opens with one of the most intense and brutal drug raid sequences ever put on film, establishing that this is going to be a story that shows the gritty realities these people on both sides of the law have to live. Coming from Prisoners director Denis Villeneuve, this striking brutality shouldn’t be a surprise. It’s a hauntingly beautiful first sequence that sets the tone for what should be a movie on the level of the all time great crime films. However, the problem with having such a gripping opening is keeping up that momentum throughout the rest of it’s two hours. How are they going to keep us from cowering from these blood soaked deserts of Juarez and El Paso?

The film centers on FBI agent Kate Macer (Emily Blunt), who is traumatized when the aforementioned raid results in the savage deaths of some fellow agents. She finds herself mixed in with the slightly overzealous Matt Graver (Josh Brolin), the leader of a task force that’s assigned to bring down Manuel Diaz (Bernardo P. Saracino), the crime lord at the head of the organization responsible for those deaths. Almost immediately, Kate feels like she’s being kept out of the loop on the operation. Matt seems to be much more in league with Alejandro Gillick (Benicio Del Toro), a former cartel mercenary turned agent who’s loyalties and motivations seem murky.

This is one of the most beautiful looking and spectacularly directed movies of the year thus far. Villeneuve established himself as a master of establishing atmosphere with Prisoners and builds on that here. There are long sequences that are nothing but just our characters taking in the horrific sights of wherever they are. With the sheer craft that he and master cinematographer Roger Deakins move their camera, we’re just as terrified as the characters. The film is often times more of a graphic mood piece than anything, and these are it’s strongest moments. Villeneuve and screenwriter Taylor Sheridan also do a fantastic job of putting us in Kate’s position. The story is crafted in such a way that just as she is having information withheld from her, we the audience are too, and it’s just as frustrating for us as it is for her.

Unfortunately, it is in Kate that the film is also the most flawed. Emily Blunt is as game as always, giving a heartfelt and authentic performance, but the character really isn’t given a satisfying arc. She spends the whole movie getting pushed aside, beaten up, and generally humiliated like a little girl on the playground when the boys are playing freeze tag. Never does she get that moment of defiance that would make all of that worth it, she just sort of cowers in the corner. 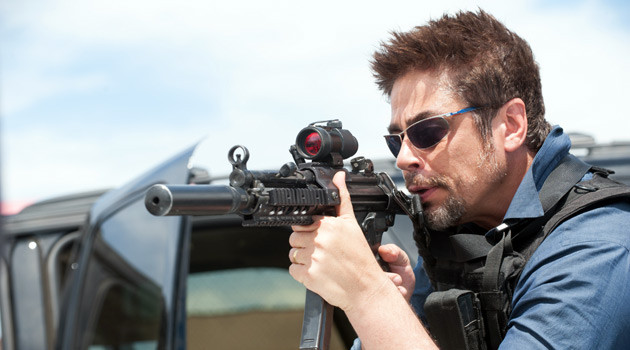 All of the really satisfying character work is reserved for Del Toro, who excels in the skin of the calculating and threatening Alejandro. Meanwhile, Brolin is certainly serviceable in his role, but never gets much depth beyond being the gung-ho team leader. This story feels like an entire narrative about the one female FBI agent or army-woman that is always forced to the background in other action movies. While that’s certainly an interesting approach, it simply never pays off in a way that makes it fully satisfying.

The best moments here are the action sequences, which are incredibly tense and beautifully choreographed. Villeneuve relishes in playing with the moment before the big shootout breaks out. Those tense stare downs and confined spaces that start to make people nervous. All of the violence here feels scary and every gunshot has a massive impact. Even for those who are adverse to a slower pace of action will feel satisfied by the last twenty minutes, when Del Toro gets his absolutely sensational time to shine. This is a movie that will leave you with at least a couple chilling images running around the brain.

Sicario is a very good movie that feels like it’s just chomping at the bit to be great. It certainly has all of the aesthetic elements of a masterpiece, and ratchets up it’s tension to a wrenching conclusion. However, some fairly unsatisfying character work despite great performances ultimately holds it back from being as much of a home run as it could have been. Even so, its fascinating story choices and sheer power in certain moments certainly make it worth seeing, but I suspect there’s an even better thriller hiding behind the curtain that will appear before the year is done.