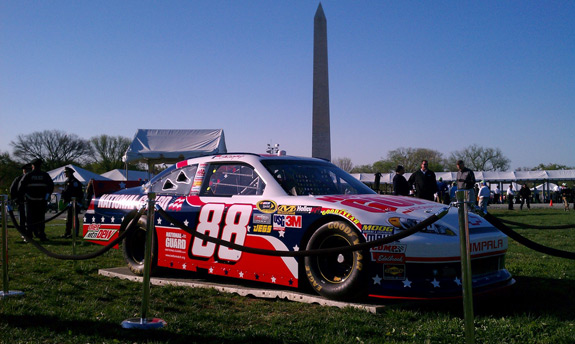 NASCAR announced the official launch of “NASCAR Unites – An American Salute,” a patriotic initiative uniting the NASCAR industry and fans this summer to show their red, white and blue spirit to celebrate America and support U.S. military families.

Through this program, NASCAR and The NASCAR Foundation will work with charities to fund initiatives that support military families. For more information on the charities and how to donate can be found at NASCAR.com/Unites.

In addition, a retail program, sponsor promotion and other at-track events will also be integrated into this period. NASCAR will also unveil a 30-second patriotic-themed broadcast spot that will debut around Memorial Day weekend and air each race weekend throughout the campaign on NASCAR broadcast partners ABC, ESPN, ESPN2, FOX, SPEED and TNT.

The initiative officially kicked off with the debut appearance of the NASCAR Unites – An American Salute paint scheme for Dale Earnhardt Jr.’s No. 88 National Guard Hendrick Motorsports Chevrolet at the White House for the 134th Annual Easter Egg Roll event. The No. 88 Chevrolet was prominently displayed on the Ellipse outside of the White House in front of approximately 35,000 guests, including members of the National Guard, NASCAR Vice President of Public Affairs and Multicultural Development Marcus Jadotte, The NASCAR Foundation Executive Director Sandy Marshall and NASCAR Managing Director, Brand, Consumer and Series Marketing Kim Brink.

A Preview Of The Cadillac XTS Platinum