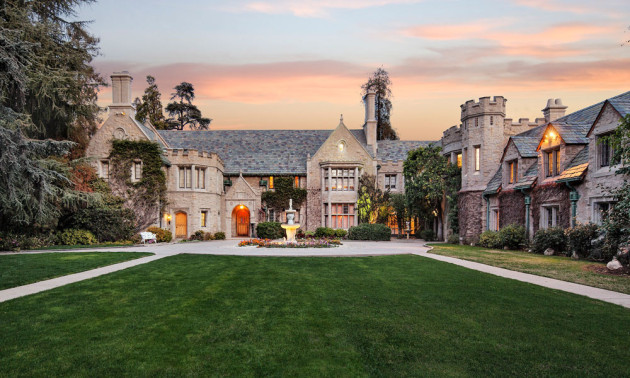 The iconic Playboy Mansion is up for sale. The nearly 20,000-square-foot mansion, which sits on five acres in Los Angeles’ Holmby Hills, has been home to Hugh Hefner and Playboy for the past 40 years, and it will continue to be if the property is sold.

That’s right, if you decide to purchase this stone-clad Gothic Tudor-style mansion, you won’t have the place to yourself, as the 89-year-old Hefner plans on staying in the estate that’s been his playground since he moved his Playboy empire to Los Angeles in 1971 for the remainder of his life.

The 20,000 square foot mansion has 29 rooms, including chef’s and catering kitchens, a game room, a wine cellar and a screening room with a built-in pipe organ. The master suite occupies parts of two floors. It’s also among a select number of L.A. properties to have a zoo license.

Grounds where the Midsummer Night’s Dream party unfolds each summer feature a menagerie of aviaries and arboretums holding a collection of exotic birds and monkeys. Albino peacocks and other animals roam freely through rolling lawns and various gardens.

Other amenities include a gymnasium, a tennis court, an orchard and the infamous swimming pool and swim-in grotto. Oh, if these walls could talk.. There’s also a four-bedroom guesthouse.

At $200 million, the Playboy Mansion is among the priciest residential properties for sale in the United States. If I had won the Powerball last week, I totally would have made an offer on the house. It probably wouldn’t have been the most fiscally responsible decision, but boy would it be fun!

This $500 Million Mega-Mansion In Bel Air Has It All.. And Then Some