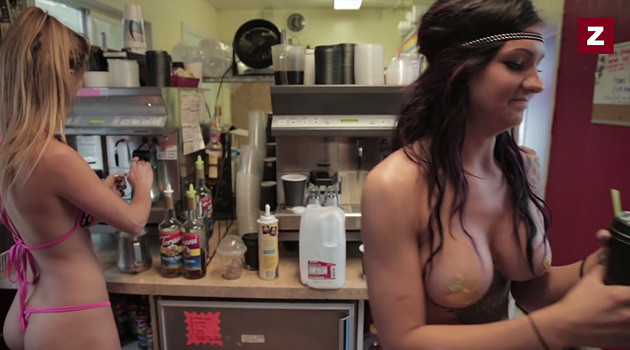 Local coffee shops have been struggling to compete with corporate behemoths like Starbucks.. Especially in the state of Washington, where Starbucks originated. So what’s the solution?

Bikini baristas! That’s right, a number of drive-through coffee shops are increasingly relying on scantily-clad baristas (both men and women) to boost sales and bring in some extra $$. And honestly, it’s a pretty genius marketing move. Heck, I don’t even drink coffee, but I’m pretty sure I’d start if it was served to me by some sexy coeds wearing bikinis.. or less.

“Yeah, could you be a dear and fetch me some creamer from the bottom shelf?” 🙂

But here’s the problem: Some in the state’s more conservative nooks and crannies would rather not have to explain to their kids why baristas in such a notoriously cold and clammy climate would go to work wearing so little. You know, instead of just going to a different coffee shop where people wear clothes.

ABC News did a piece about Washington’s ongoing bikini barista debate, which you can watch below:

Where do you stand on bikini baristas?