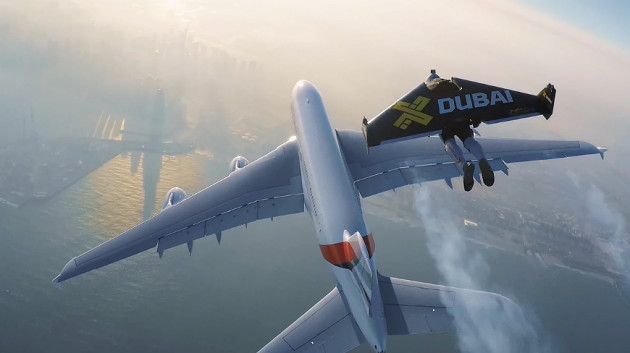 In a new video by Emirates and Jetman Dubai, we see two men (ex-fighter pilot Yves Rossy and parachuter Vince Reffet) soaring through the sky, dipping and diving around a massive Emirates-owned A380 airliner, held aloft solely by jetpacks.

As you can see in the video below, the two fearless men perform a beautifully terrifying synchronized dance through the sky as they whiz by the massive 238-foot long plane, unfazed by the fact that one wrong move could send them into the spinning turbines of the airliner and spell certain death for them.

To say this stunt is impressive would be an understatement. Watch it for yourself and see what all the fuss is about.