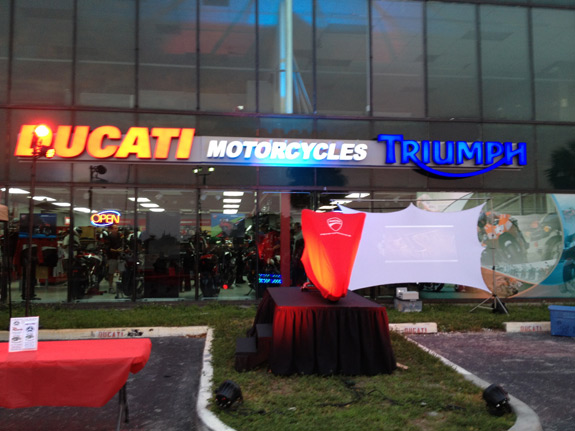 On April 27th, I attended the Atlantic Ducati of Pompano’s unveiling and welcome party for the 2012 Ducati Paginale. There was a festive atmosphere was bolstered by a live DJ, a lineup of Ferrari and Maserati’s finest and scantily clad women everywhere. 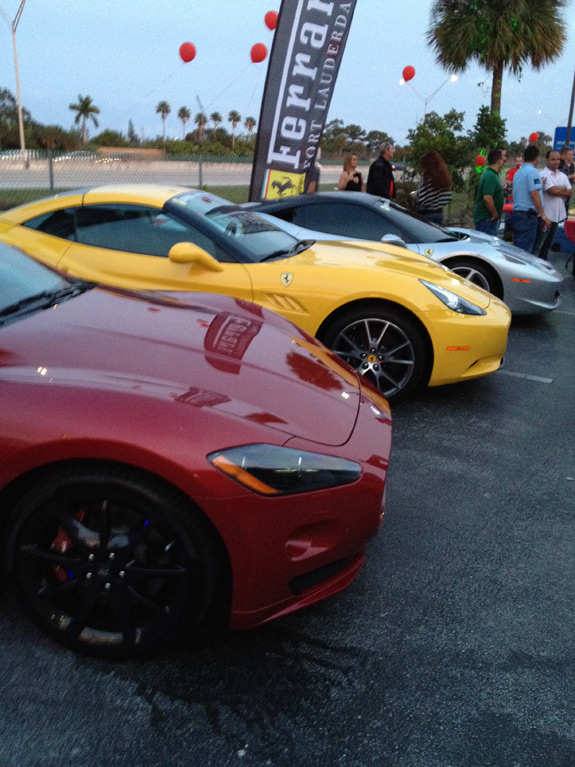 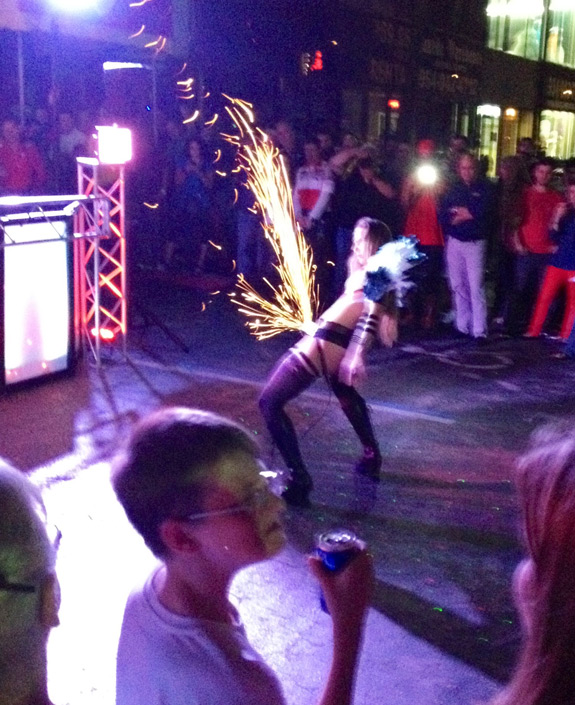 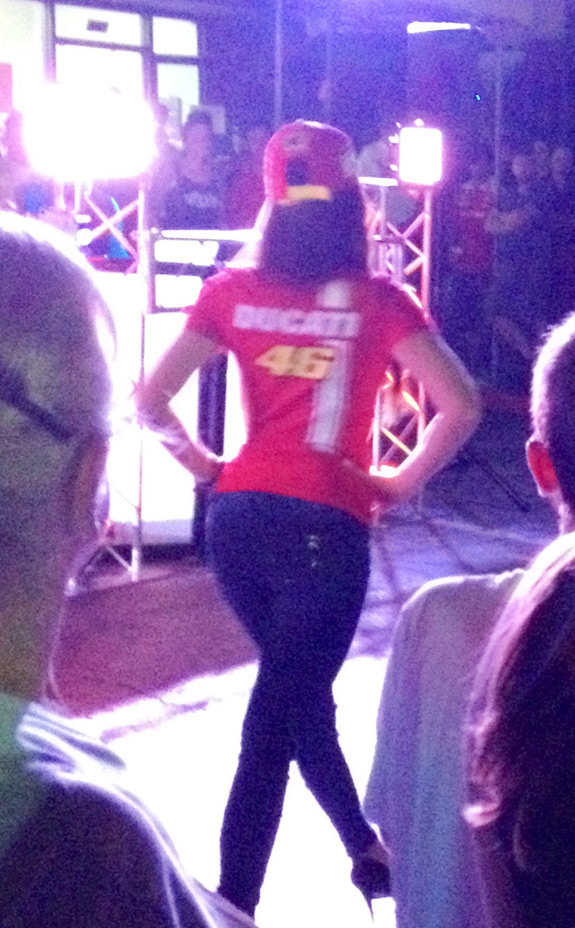 The entire night was spent drinking, eating and admiring the various attendee’s rides. 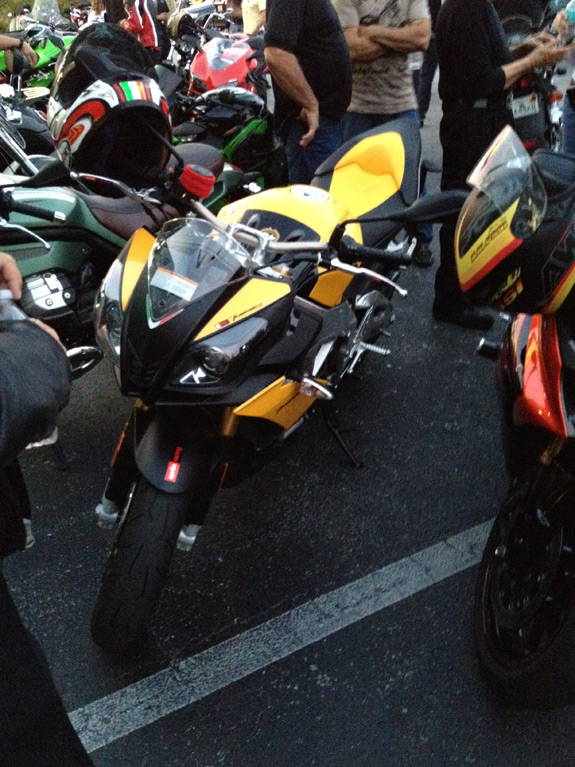 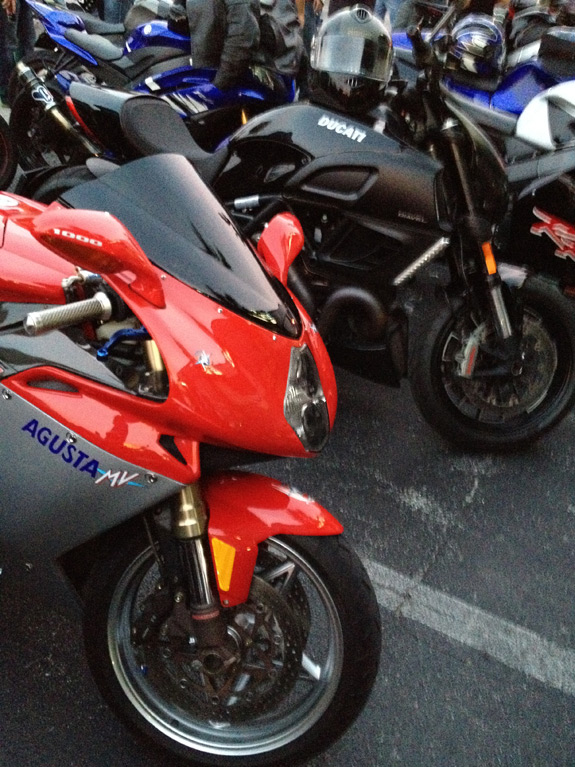 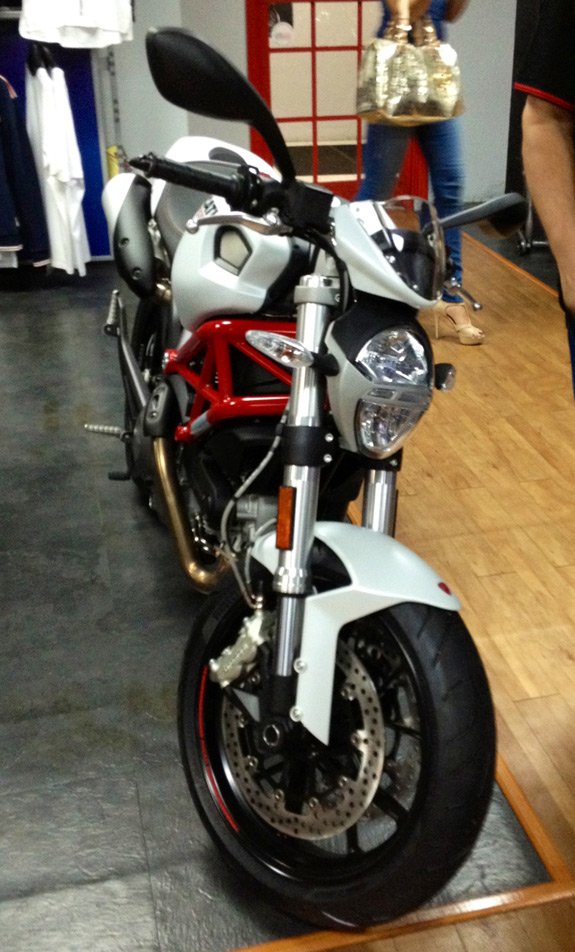 We had beer, wine, pizza and pasta to round out the Italian experience. There was even complimentary scotch tasting provided by Macallan with 12, 15 and 20 year scotch–high brow indeed. Inside the showroom, Atlantic Ducati was more than helpful and encouraged visitors to touch, sit and experience the full stable of Italian machines for sale. 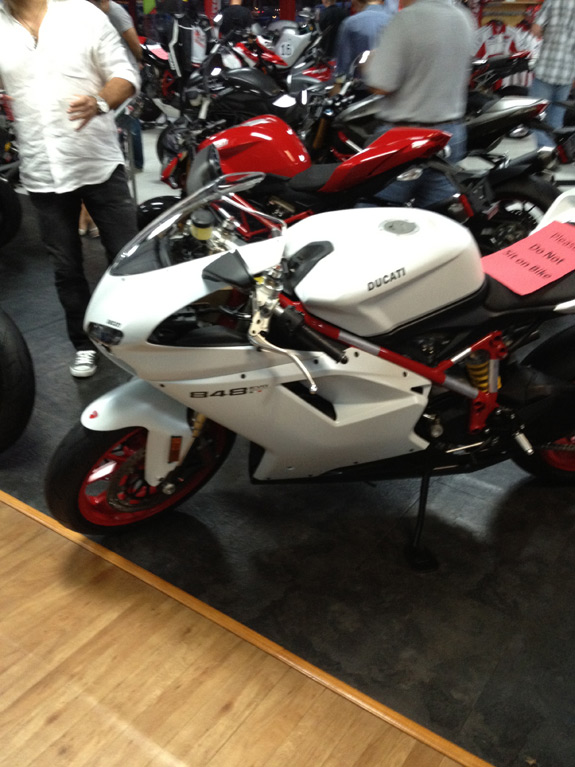 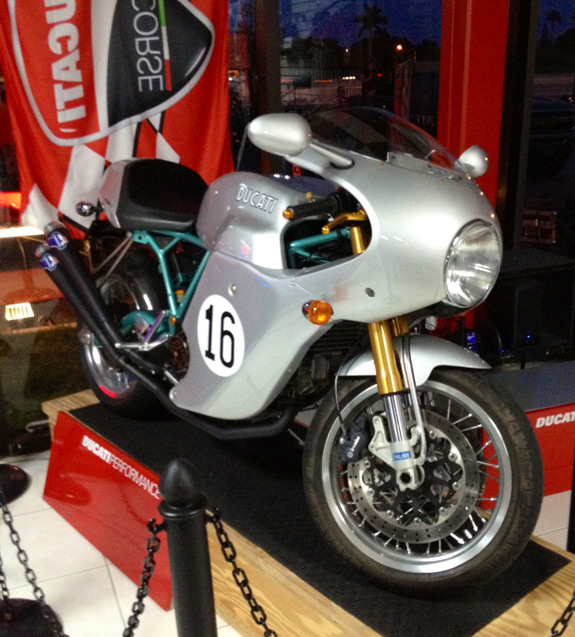 Ducati spent two decades incrementally evolving its superbike design and sticking to a trellis frame layout before completely reinventing its 2012 flagship. Dubbed the “Panigale” after the Bolognese neighborhood where the Italian manufacturer is based, the newest bike addresses its predecessor’s shortcomings with a completely re-imagined design retaining two quintessentially Ducati features: a big twin engine layout, and Desmodromic valves. Though the trellis frame and underseat muffler are gone, the signature Ducati exhaust note remains.

The “1199″ designation isn’t entirely accurate— its L-twin displaces exactly 1,198.16 cc — but besides the misnomer, there’s nothing about this bike that isn’t new. The trellis frame has been replaced with a 9.2-pound aluminum monocoque that incorporates an airbox and uses the engine as a stressed member. Mass has been centralized, ie, moved towards the middle of the bike, thanks to a new, underslung exhaust system. In addition to the smaller muffler, aggressive weight savings throughout include an aluminum fuel tank, lighter wheels and brakes, and re-worked subframes to hold the seats and instrumentation in place. Overall, the Panigale drops a substantial 22 pounds, yielding a wet weight of 414 pounds. 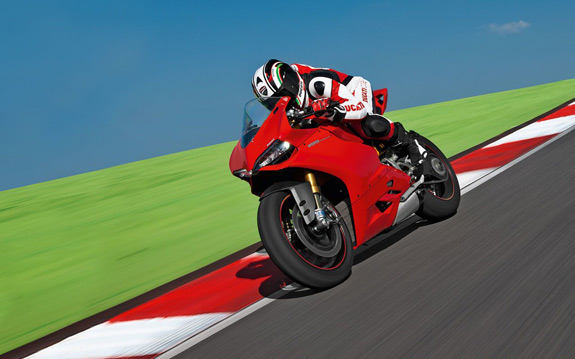 Among other mods, the new mill alters its internal proportions to facilitate its 25 horsepower gain, resulting in a peak figure of 195 hp at 10,750 rpm. Pistons have been widened to a massive 112 mm bore, the largest you’ll find outside the realm of supersized cruisers. The resulting oversquare ratio is fondly referred to as “Superquadro” by the Italians, and favors high-revving horsepower over midrange torque; though it approaches the bore/stroke figure of a Formula 1 engine, the Panigale still manages a thumping 98 pound-feet of torque, which peaks at a screaming 9,000 rpm. For what it’s worth, Ducati claims the most potent power-to-weight ratio of any production motorcycle.

The Panigale features six electronic control units such as traction control, throttle response, ABS, and a clutchless quick-shift. The settings are negotiated via toggle on the left handgrip and a contrasty TFT screen from a jet fighter cockpit. And yes, there is, of course, a track mode that removes all electronic safety and allows free reign over those 195 horses and braking. The “S” model adds an electronically managed suspension system that adjusts rebound and compression settings from the cockpit; ABS is optional on the base and “S” models, and adds 5.5 pounds to the overall weight. 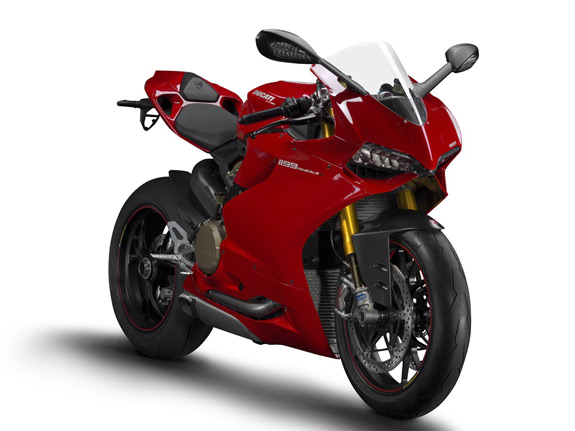 The lines are very fluid and remind me of the new Lamborghini styling influence found on the Aventador. The plastic almost flexes in the wind similar to aerodynamic designs in Formula 1 racing.

To Harley Or Not To Harley