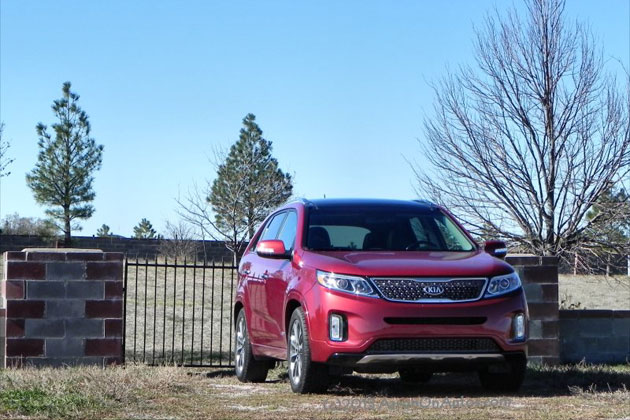 Quick: when you think of Kia, what’s the first thing that comes to mind? Cheap cars? Great warranties? Well, prepare to have those boring concepts tossed to the curb, because the 2014 Kia Sorento SX AWD is not just affordable, it’s extremely posh and far more capable than most would give it credit for.

The 2014 Sorento is one of the latest vehicles that Kia has begun assembling in the U.S., allowing a more Americanized team of designers to work with it. In this rendition, all previous notions of what the Sorento was should be dumped and a clean slate should be given to the crossover.

The midsized crossover market is heavy with strong contenders bringing their A-game and to compete, Kia had to do something beyond the norm. Rather than mess around with a perfectly good-looking design (remember, we’re talking crossovers here, not sport coupes), though, Kia instead focused on the interior of the 2014 Sorento. 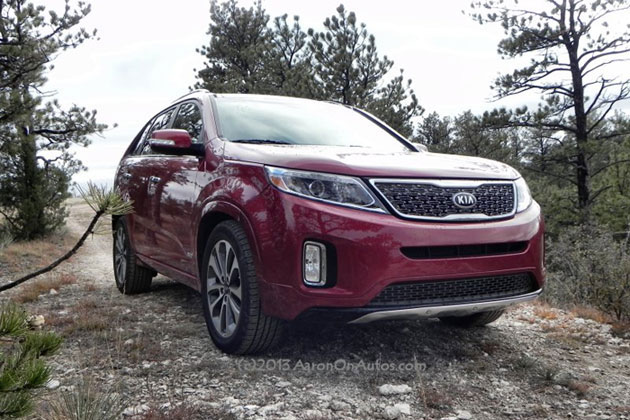 Of course, the exterior of our test vehicle was pretty radical anyway, with a paint color that even Chuck Norris would approve of: Remington Red. You can’t go wrong with a name like Remington.

Inside, though, is where the new Sorento really makes its mark. For those of us in the old school, the best way to describe it quickly is to say “like a Cadillac.” It’s luxurious in its top-fitting as we drove it, but still comes in at under $39,000. Given the amount of excellent standards and options included for that price, the 2014 Sorento is almost unbelievable.

The first thing you’ll notice when you climb in is the awesomely huge panoramic sunroof. It starts just forward of the driver’s head and extends all the way back past the second row of seating, effectively making the entire roof a big glass canopy looking out at the sky. What’s better is that when you don’t want it open, you simply press a switch and the whole thing has a thick sunshade that covers it, blocking not only the light, but also heat loss. From there, you realize that you’re sitting in beautiful leather seating with great trim and high amounts of comfort. 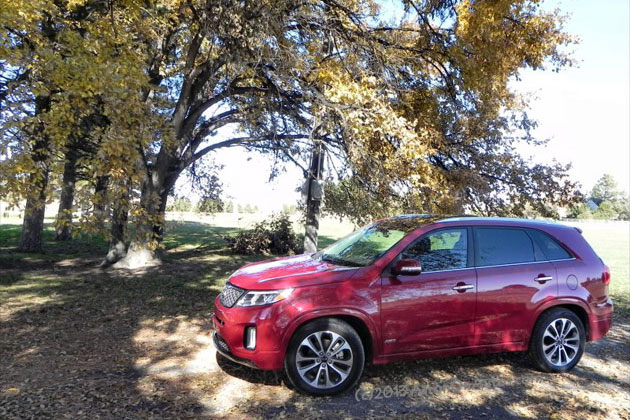 An Infinity sound system finishes off the appeal with excellent sound throughout the cabin, no matter where you’re sitting. There’s even a third row for the kids, cat, or small neighbors to occupy when you want to pack in up to seven people for the ride. Even better, the large doors with a wide swing facilitate easy entry and egress from the Sorento.

In the 2014 Sorento SX AWD we drove for a week, the new 3.3-liter DOHC GDI CVVT V6 – for the non-auto linguist, that’s a dual overhead cam, gasoline direct injected, continuously variable valve timing V-6 – puts out more than enough gumption to keep the crossover going on and off the road. It delivers 24 mpg on the highway despite its muscular 290 horsepower and 252 lb-ft of torque through the all-wheel drive powertrain. The Sorento is sure-footed in light offroad, snow and ice.

Did we mention the panoramic sunroof? Here’s a suggestion for those who want to make the most of their 2014 Sorento: put the third and second rows of seating down and throw in an air mattress. Take your favorite girl out to the beach or the mountain (the Sorento can go to either with ease) and open up that sunroof for a nice evening of gazing at the stars and see where that leads. Bring a jacket, if you know what I mean. 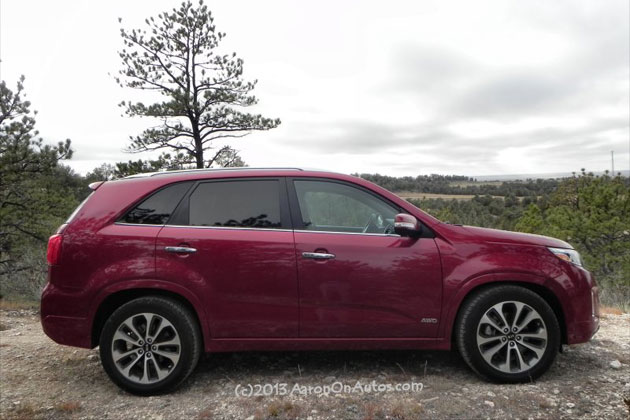 Related Topics:2014 Kia SorentoKia
Up Next