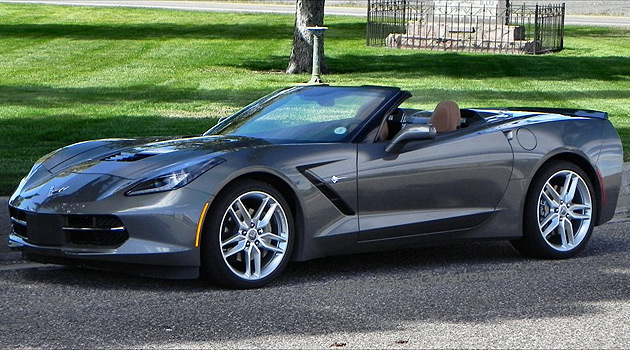 When I was told that the 2015 Corvette Stingray Convertible would be coming to my home as a press loan, I tried to stay calm, collected and professional. This lasted until I had responded in the affirmative and marked the ‘Vette’s arrival date on my calendar. Then a twenty minute series of whoops, hops, fist pumps, and “@#%* YA!s” commenced. I lit up my phone for the next hour, calling everyone I knew and saying phrases like “Guess who’s getting a CORVETTE. WOOOO!”

I will fully admit to being as close to the traditional target demographic for this car as can be imagined. Middle aged? Check. Car lover? Check. A bit lumpy around the middle? Check. Bald? Nope, missed that one. In love with the V8 massage a tuned rumble crate gives? Cheyeck. 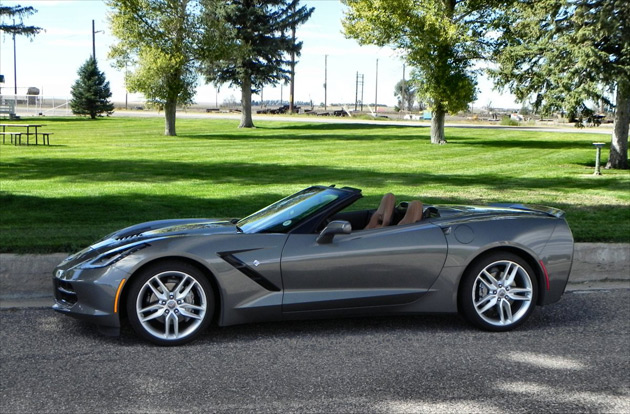 The funny thing is that traditional demographic is only partially accurate for this new 2015 Corvette Stingray. During the week that I piloted this beautiful ride, the enjoyment and interest in this car was nearly universal. The age group didn’t matter. I gave rides to little kids (one of whom was convinced it was a Ferrari), old folks (don’t worry, I took it easy on grandma), and everyone in between. Men were far more fascinated, of course, but women, young and old, also loved the refined feel and beautiful look of this new ‘Vette.

My test drive was a 2015 Chevrolet Corvette Stingray Convertible in Shark Gray Metallic with a beautiful light brown, almost Corsican interior (Chevy calls it Kalahari). The black top folded down to reveal some of the most beautiful leather seats you’ve ever seen in a sports car that, for all of its storied history and nostalgia, looks as fine as most of the modern European sports cars you might compare it with. Certainly nothing else from Detroit comes close. 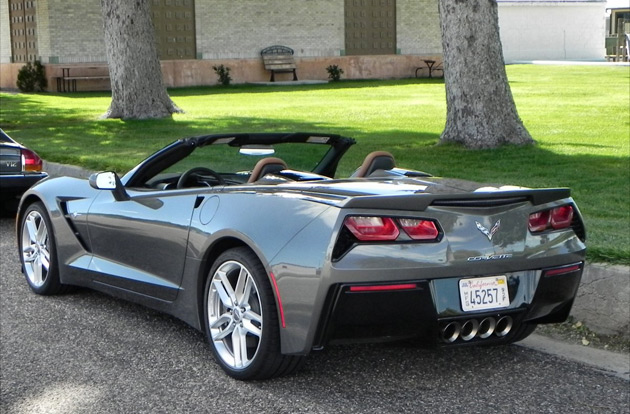 The Stingray in this new form has a beautiful curvature that begins with the classic, low hood between tall shoulders and slopes slowly upward to the windscreen, which is canted back in a low profile. The big shoulders sway down to a dipping middle and return to heavy hips over big tires at the rear. The entire look of the car, from the side view, is of a woman lying on her side. It’s a beautiful combination of strength and sex appeal.

Inside, the Stingray has a beautiful interior that combines black faux leather and plastic with continuations of the exterior color inside. This is set off by the beautiful Kalahari leather we spoke of earlier and the optional suede microfiber edges. Although it’s low and fast, those of large stature will still be able to get in and out of the Corvette and be comfortable once down in the driver’s chair. Seating is an excellent combination of comfort in a bolstered sports grip. Everything, of course, is tuned to the driver.

When the engine is lit up, it doesn’t growl in menace, but instead rumbles in readiness. It’s a lovely sound and only a natural V8 can make it. The V8 is a small block outputting a massive 455 horsepower, which is boosted to 460 horses when the (highly-recommended) tuned exhaust package is added. A look under the hood shows that the engineering here is simple but very well-executed. Air intakes into a canted radiator from two sources. The top quarter of the radiator is fed by the small grille at front, with the air passing through the top portion of the radiator and then out the hood through vents that create downforce at the front. The rest of the air pulls in from underneath and through the radiator and its fan. This combination creates frontal downforce while the curvature of the car itself creates more at the rear to press down the drive tires.

The engine sites several inches behind the steering rack, but doesn’t push into the cabin thanks to the small block design and the long, thin transmission that follows. That eight-speed transmission, by the way, is responsible both for a better experience behind the wheel and higher fuel economy along with better speed times than is the standard; a tribute to modern engineering. In more than one attempt, I could not outshift or outperform the automatic transmission. That transmission also boosts the rear axle ratio to 2.41. 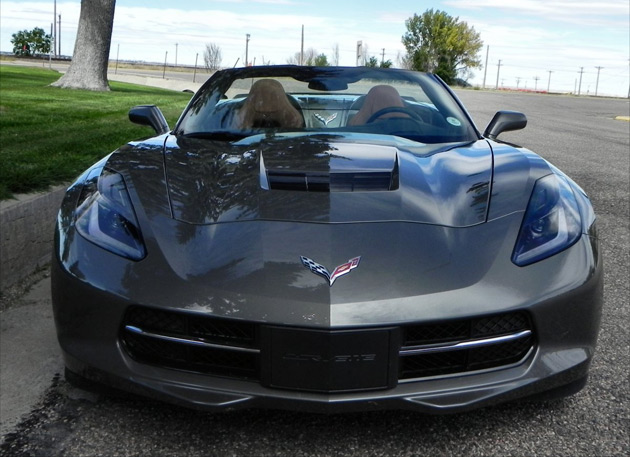 Now for the good parts. With 460 horsepower, 465 lb-ft of torque, and some of the most beautiful tones you’ll ever hear from a performance exhaust, the 2015 Corvette Stingray launches into a 0-60, flat-footed, at 4.9 seconds under my tutelage. This was with two passengers. The 0-100 mph was 10.8s and the quarter mile was 13.3s. Thanks to the Performance Data Recorder package, I was able to capture my speed runs and data. The numbers alone, however, don’t describe the feel of the ‘Vette.

Most of my speed trials were on stretch of pavement that has a slight curve in the last third and an incline of about three percent. Starting at the bottom, I would accelerate flat-footed (no RPM goose, no pre-shifting). The launch system in the 2015 Stingray meant that I could literally just jam the throttle down and it would hold traction and go. For comparison, the Lexus IS-F had roughly the same times, but required some feathering at the start to keep from chirping the rear tires and losing grip. This flat-footed launch method on the same road every time gives me a good metric as to which cars can do what. 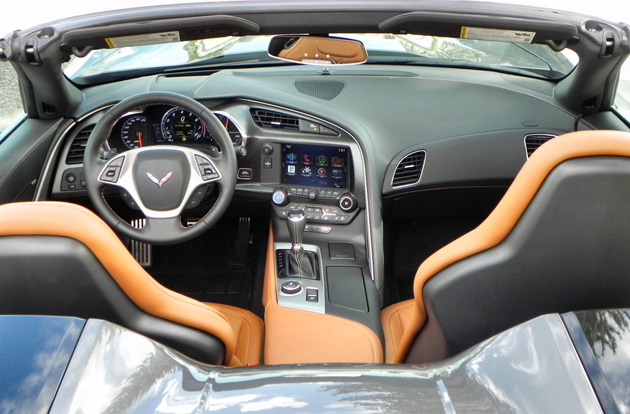 In the Corvette, I was launching from zero and making sixty well before the curve in the road. On that curve, according to the ‘Vette’s G-force meter, I was pulling about 1.3 Gs as I turned, usually in the 97-101 mph range. Not once does the 2015 Corvette Stingray ever feel like it’s going to lose control or require you to slow down on those curves. I took 90-degree turns on other roads at 60+ without flinching. This long, low, powerful car handles exceedingly well – far better than any other American sports car I’ve ever been in. Better than many European ones as well.

Above all that, though, is the rising grumble and eventual open throated roar that the V8 outputs when you’re pressing it down. It’s phenomenal and outranks any radio station you can find. What’s more, you can elicit that sound whenever you’d like, whether cruising along at 70 and then jumping ahead to go around a slower vehicle, or when sitting at the stoplight and launching forward on the green. This latter maneuver, while it might draw the ire of the cops, will often elicit cheers from pedestrians. 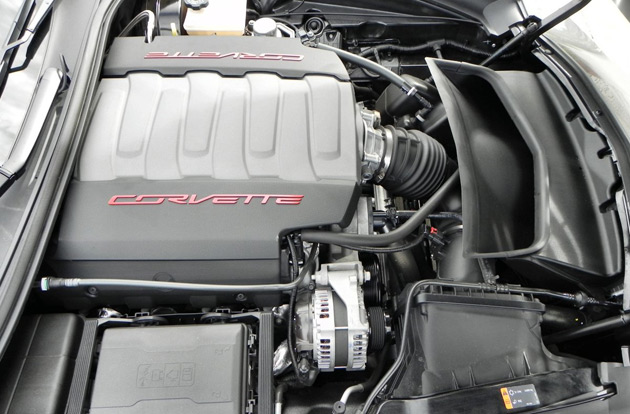 As a whole package, the 2015 Chevrolet Corvette Stingray is a beautiful, well-engineered rendition of one of America’s best-loved sports cars. The Corvette has always been more than a mere muscle or pony car. From the beginning, it’s always been a true sports car in every way. While it’s had some ups and downs in terms of design and capability, this latest generation is likely the best combination of refinement and speed that’s ever been produced. Hats off to the GM engineers for this achievement. At a base price of $58,000 no less. Bravo indeed. 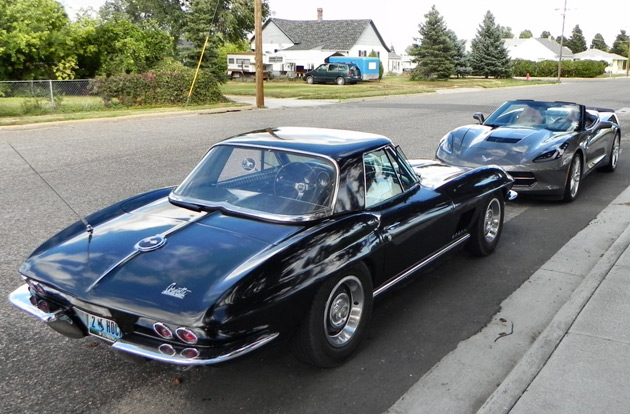 The 2014 Lexus ES350 Is Everything The First Lexus Should Be