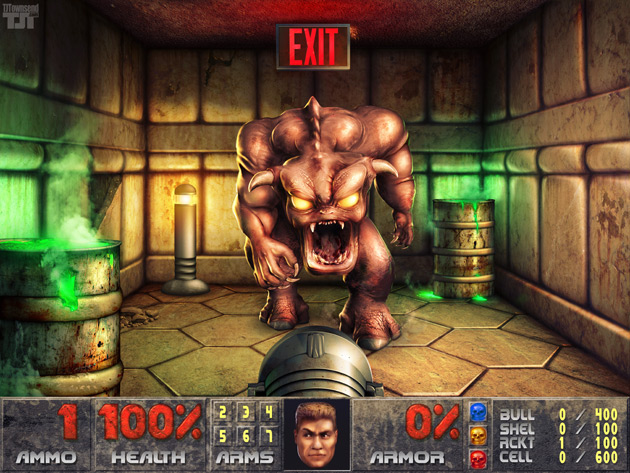 This New Yorker article says that one of the reasons why first-person shooter games are so popular is that they put the gamer in a state of flow. In other words, they’re popular because they’re fun to play. Here’s a list of eight classics of the genre:

Unreal Tournament is the root for much of the language surrounding the first person shooter genre. . Its twitch gunplay was awesome for its time and it the non-player characters were pretty smart, too, presenting you with a real challenge between bouts with other player characters. This article, written by one of the game’s developers, provides an interesting background into its development.

With the United States and the Soviet Union still in the grips of the Cold War, Operation Wolf was a game of its time. What made it extra special was that the cabinet that housed the game had a replica of an Uzi assault rifle attached to it. Rather than using buttons and a joystick, the Uzi became your controller and you used it to shoot the enemy.

Counter-Strike started out as a modification to Half-Life, another legendary first-person shooter. It quickly became so popular that the developers added it to Half-Life as a separate module. From there, it morphed into a monster that ruined the lives of countless gamers. It turned them into foul-smelling creatures that hid from the light of day, retreating into basements fortified with Red Bull and Doritos.

Another game that broke boundaries was Halo: Combat Evolved. Before Halo: CE, most first-person shooters had little to no story to speak of. They didn’t need it, so long as they had good graphics (for the time) and they were fun to play. Halo: CE changed all that: It was still fun to play, and had all the graphical bells and whistles of its day, but it also included a story. The combination proved to be extremely addicting, especially in the multiplayer mode.

You’re a space marine stationed on Phobos, one of Mars’ moons, and you’ve got a problem. Some idiot opened a door into hell and now, you’ve got to deal with the consequences. That’s Doom’s plot in summary. Beyond that, you’re shooting and killing demons through a terrifying landscape of 27 levels. Doom is the prototype for the countless games that have come after it with the same basic plot…or lack of one. So, grab your BFG 9000 and send those demons back to hell!

Quake is another game that was groundbreaking it its time. It was the first game in its genre to successfully launch a multiplayer mode. This made it possible for gamers to compete against each other in combat, and this became the mainstay for first-person shooter games ever since. Another important feature of the game was the fact that you couldn’t just spray bullets at your opponent and hope to kill them that way: you actually had to aim your gun where you wanted to shoot.

While Medal of Honor has you marching into battle alone, Call of Duty sends you in with a team. It’s the first WWII game that lets you play as a British or Soviet soldier. It also features locational damage and lets you see where the gunfire is coming from on the screen. It has a single player story mode and, of course, a multiplayer mode that lets you team up with friends to battle other teams.

These classics paved the way for the modern shooters, games that give you hours of flow.