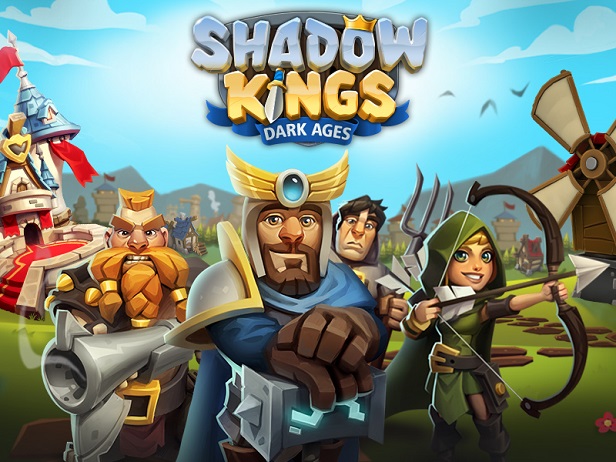 The adventure begins with an orc threatening to wreak havoc on humans. The orc’s evil army has already conquered elves and dwarves, and now they seek human blood. However, the bright, colorful artwork and whimsical music don’t make me feel very threatened. I accept the challenge to protect the people’s city, and a mandatory tutorial ensues.

Bombert the Warrior and Magical Meria guide us through the ins and outs of Shadow Kings. From the very beginning, I am pleased to navigate large, descriptive menus. In this game, there is no need to squint and struggle to use tiny buttons at the bottom of the screen. Each icon (Quests, Build, Messages, etc.) brings up a nearly full-screen box with clear graphics and text. This very welcome feature makes it easy to build, recruit, and explore all the game has to offer.

Like many similar titles, Shadow Kings requires competitors to build barracks, train warriors, and gather resources. Fans of this genre will be familiar with each step of the process. However, I was impressed with the level of detail regarding each type of warrior. Even in the early stages of the game, we can see clear differences in character attributes (4 fighting stats) and costs. Leveling up results in an expanded roster of attackers, defenders, and battle tools. Economic buildings also feature similar innovations. Instead of taking up valuable land with additional buildings, players can upgrade each stone quarry and woodcutter’s hut to mine more efficiently. At any time, we can switch between viewing the resource quantity and mining rate (displayed in units per hour). This is a great feature for determining exactly how fast we are gathering stone and wood.

The 10-minute tutorial walks (i.e. forces) us through all of the steps necessary to reach Level 3. At that point, players are ready to complete quests and enter battle. The lighthearted style of Shadow Kings makes it a happier, potentially more fun version of a tried-and-true game formula. The bright, user-friendly interface and helpful building additions make this one of the best games in its class.

Related Topics:Shadow Kings
Up Next

The History of Gaming: From Nim to Nintendo