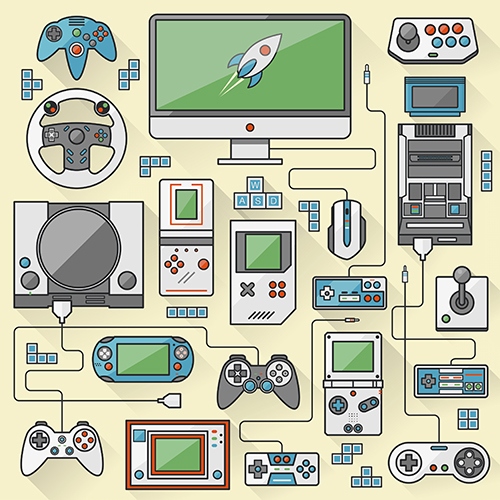 When kids sit down in front of the TV to play Minecraft or Mario on their consoles, they probably have no idea just how far video games have come through the years. All they know is they turn on the unit and insert the game disc to be brought to a colorful make-believe world. Their parents, on the other hand, might have a better notion of how advanced today’s video games are; they may recall grainy black and white games of Pong and how exciting it was when the first color games hit the market.

Cideo games actually got their start back in 1940, when a gentleman named Edward Condon created a computer that was on display in the Westinghouse booth at the World’s Fair, the Museum of Play notes. The computer allowed people to play a game called Nim that involved picking up matches. Seven years later, Thomas T. Goldsmith Jr. and Estle Ray Mann filed their patents for what they called a “cathode ray tube amusement device.” When attached to an oscilloscope display, it allowed players to shoot at a target with a gun.

In 1958, Willy Higinbotham helped pave the way for hours of Pong playing in basement game rooms when he created a tennis game on an oscilloscope and analog computer. The game was placed on display at the Brookhaven National Laboratory. Although Higinbotham’s game never really caught on, it helped to inspire later similar games like the iconic Pong.

In 1962, Steve Russell from MIT, along with his friend Martin Graetz and Wayne Wiitanen, invented a game that involved players trying to destroy each other’s spaceship, notes Wikipedia. Called Spacewar, this was one of the first computer games sold around the country; in fact, it was included as a program on every PDP-1 computer that was sold. Unlike other games that were pretty much just invented but then never played for a number of years, Spacewar was part of university computer labs by the end of the decade.

Meanwhile, in New Hampshire, Ralph Baer was interested in transforming television from a passive experience to a more active one. Collaborating with his co-workers, Baer created a system that sent a video signal to the TV, which in turn created spots on the screen that players could control. This led to the invention of quiz and target games that could easily incorporate the spots. Baer eventually agreed to work with Magnavox to market his system, which was named the Magnavox Odyssey and hit the markets in 1972. The Magnavox Odyssey was the first actual video game that involved people moving images on the television through a video signal.

By the 1980’s, video game arcades were rapidly growing in popularity. Kids of all ages would hang out for hours playing games like Pac-Man, Centipede, Asteroids and many others. As New Republic notes, Super Mario Bros. made its mustached debut in 1985; the game has evolved a bit over the years but is still incredibly popular today. In 1991 or so, consumers were eager for home video game systems with amazing graphics; for example, Sonic the Hedgehog was the star of the many Sega Genesis systems that were sold then.

The technology behind video games has advanced so rapidly in recent years, it’s amazing to think there’s still more to be invented and improved upon. From games with 3D capabilities and systems like the Nintendo Wii that made us part of the action with the flick of the controller, to websites like iWin that feature dozens of tablet and smartphone friendly games, gaming opportunities are everywhere. Current popular consoles like the PS4 and Xbox 360 will probably make way for newer and more technologically advanced units.

Related Topics:video games
Up Next