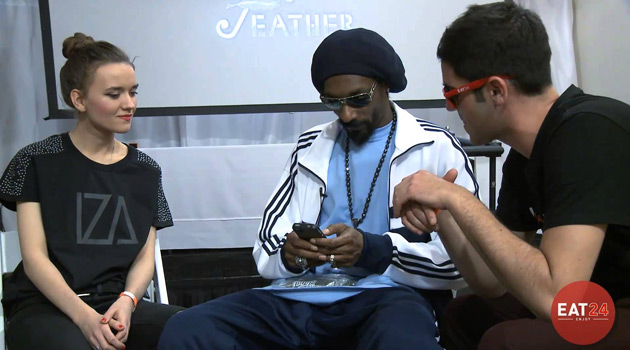 SAN FRANCIZZLE, July 2013 – Food delivery app & website Eat24.com revealed a surprising collaboration with international music icon Snoop Dogg aka Snoop Lion. The Eat24 app was introduced to Snoop during the premiere of his new film “Birds of a Feather” at the SoundCloud Creator’s venue at SXSW in Austin.

Eat24 founders hooked up with the star during one of many “smoke breaks” and offered him a test drive of the app. Snoop was immediately impressed with the Eat24 app, especially the ease of locating all kinds of chicken wings available nearby for delivery. An undisclosed amount of wings was promptly ordered, enough to feed the entire party. “I’m always playing with new apps, but Eat24 is my go to app for ordering food,” said Snoop “When we’re on the road touring, they make ordering easy, ya dig?”

What was love at first site has turned into an affair, as Snoop now uses the Eat24 app on daily basis to order food for his studio staff at Double G News Network . “I had to turn the crew on to this Eat24 app,” Snoop continues, “We get wings, pizza, pasta, even Duck A’Lorange right to the studio. It’s the best highdea I had in a long time.”

Popularity within the 420-friendly community is nothing new for Eat24, in fact, recent data analysis revealed a sharp increase in orders right around 4:20 PM daily. Coincidence? Probably not. “If you think about it, the Eat24 app is like munchies on demand,” says Eat24 co-founder Asaf Sharon, “except it’s free and there are no commercials.”

Related Topics:Eat24Snoop Dogg
Up Next

The Kia Cadenza Experience At Sbraga