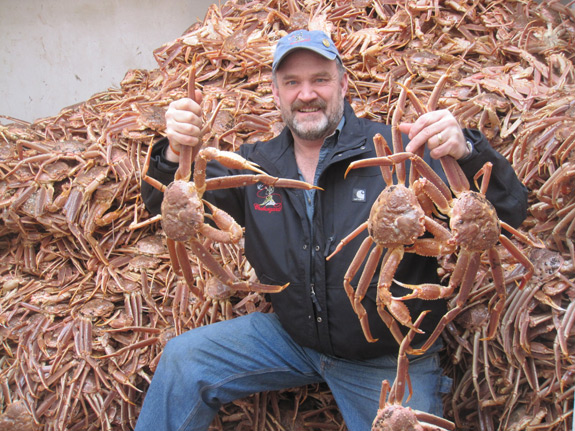 The folks at Crown Royal reached out to me a few weeks ago, and asked if I’d be interested in talking with star of Discovery Channel’s Deadliest Catch, Captain Keith Colburn of the Wizard. I’m a HUGE fan of the show, so they didn’t need to ask me twice! 🙂

It seems like an odd pairing, Crown Royal and Captain Keith. But the two have joined forces in Seattle to toast fishing stories and boating responsibly. Here’s a blurb from their press release:

After 25 years of sailing the high seas, Captain Keith Colburn is well versed in the challenges the water offers to professional sailors and recreational boaters alike. That’s why Colburn, a Seattle local and captain of the Wizard as seen on The Discovery Channel’s hit show “Deadliest Catch,” has teamed with Crown Royal to stress the importance of boating responsibly this summer. Colburn will encourage adult consumers to wait until they are safely on land before celebrating their fish tales with a Crown Royal cocktail.

Fishing on the Bering Sea is dangerous work (as we’ve witnessed firsthand on the show), but it’s important for anyone heading out on the water to boat safely. Captain Keith stresses the importance of properly securing life vests, making sure your boat passes a pre-departure safety checklist, checking weather forecasts to avoid a Gilligan’s Island-type fate, and making sure that all passengers are aware of the location of safety equipment in case of emergency.

Colburn has been a professional fisherman since the age of 22 when he began as a greenhorn crabber on the Alaska Trader, so who better to keep you safe and sound?

We chatted about a variety of topics, but one question made him laugh out loud. I asked him if they had showers on board (I read somewhere that they didn’t). Turns out they have showers, microwaves, and a number of other creature comforts. It’s not the Four Seasons, but after 36+ hour grind sessions, the crew just yearns for the basic – Hot water, a hot meal, and a place to sleep. Anything else is a bonus!

Colborn praises his crew for their dedication, even during bad stretches of crabbing where they’re pulling up empty pots. (And we’ve seen quite a few empty pots this season) You’ll see deckhands on other boats cursing out the captain and laying blame on them, but the Wizard’s crew is loyal to Captain Keith, and they works together as a team to make things happen.

Asked if there’s anything we don’t really see on the show, he explains that we only get a small glimpse into their world, a week’s worth of footage edited down to 42 minutes. We might see a string of empty pots, but in reality they’ve been hauling gear for 4 days with dismal results.

The job is a real grind, and aspiring crab fishermen are warned to give it some serious thought before heading up to Dutch. It might look like easy work, but just look at the latest greenhorn on the show – The furniture mover from Denver thought it would be a breeze, and talked a lot of trash about others before him who couldn’t cut it. Then two hours into the job, he’s ready to give up, claiming he’s having a “mental breakdown”.

I also asked about crab quotas. You’ll hear a captain talk about their 300,000lbs crab quota, and I wondered how exactly that worked. So here’s the deal – If you sign a contract to bring in X amount of crab, you’ve got to bring in X amount of crab. If you come in short, you’ve got to pay for the difference out of your own pocket. A shortage could end up costing you $100K or more! So quitting isn’t really an option, you’ve got to keep at it until you meet your quota. What makes it worse is that it costs roughly $6000/day to run the boat, so an extra 10 days at sea could cost the captain an additional $60K and actually put them in the red for the trip!

Lastly, we talked about some of the new faces on the show this season, like the motley crew on the Rambling Rose. They’re off to a rough start as well, but Keith things they’ll be successful in the long run. Sure, they’re bound to make many of the same rookie mistakes that he himself made when first starting out, but that’s just the nature of the beast.

All in all, it was a pretty interesting conversation. A huge thanks goes out to Captain Keith and Crown Royal for this opportunity!